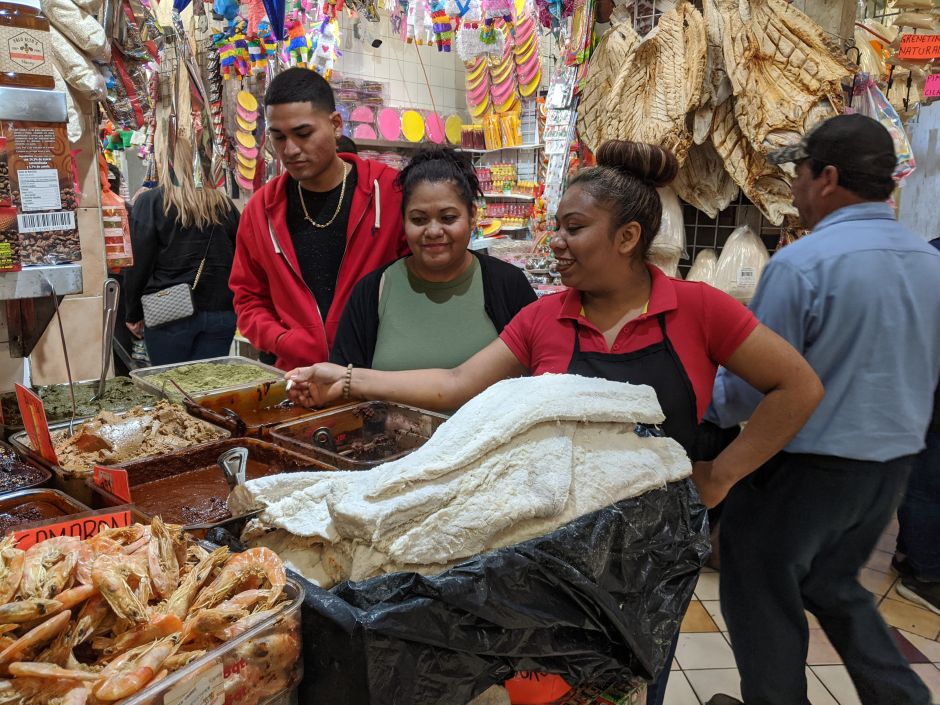 Last minute shoppers, go by dough for tamales, mole and even buñelos

Latin families could not miss the traditional foods to celebrate the end of the year and the beginning of a new decade. And as is common, the Mercadito del Este in Los Angeles yesterday received hundreds of buyers who came from near and far to make their last minute purchases.

Among them was Mr. Daniel Valencia who arrived accompanied by his wife to buy mole and make dinner to receive 2020.

"We came from Fontana to buy everything," he said.

A few steps away, Mr. Alfredo was ready to receive his mole at the Mini Market, located on the second floor.

"My plans are to have dinner with the family and we hope to continue having health and work by 2020," he said, although he preferred to keep his last name in reserve.

The vendor who attended Alfredo, Domitila Osorio, said that the mole poblano is very typical for this season and that they sell it even with the shrimp already included.

“The mole poblano is the house special… We also have it with almond, mole oaxaqueño negro, mole coloradito. We have different varieties of moles, ”he said while showing almost 15 diversities of this dish.

In the adjacent business, the Deli International, Fabiola Arroyo attended to the customers incessantly showing them the different types of food they could buy for their New Year's dinner.

“By the end of the year they ask us a lot for cod that has no spines. It is long and thick, ”he said.

"People soak it about three times to remove the salty, boil it and then crumble it like chicken."

Arroyo added that another popular food is the romeritos (leaves of a plant) that people cook to their liking.

A few steps away was Daali Hernández, who was offering tastings of the caramel candy and the tamarind pulp, another favorite at the end of the year parties.

"Tamarind pulp is used to frost the micheladas or to prepare the fruit for breakfast and give it a more spicy flavor," said the seller.

"What also sells the most is the dough for the tamales and tortillas … The mole and the Cajeta de Celaya," added the young man, asserting that this is the busiest season since it is when families get together.

As for his plans for 2020, Hernandez said he hopes to be better emotionally, health and economically.

At the end of the hall, on the second floor of the Mercadito, was Gustavo Vargas, from the Tacos 5 de Mayo business, where huge fritters that adorned the entrance of the business could not go unnoticed.

Vargas said that people arrive at the Mercadito del Este in Los Angeles by the traditional, since since they enter they can identify with their culture.

The businessman said that by 2020, he hopes to continue growing and expanding the business a little more.

“We also want to take care of employees because there is a lot of competition. We must be aware and adjust to new fashions without losing the traditional, ”said Vargas.

Federal bill would legalize more than one million farm workers

It's official: E2, L and F visas are shortened