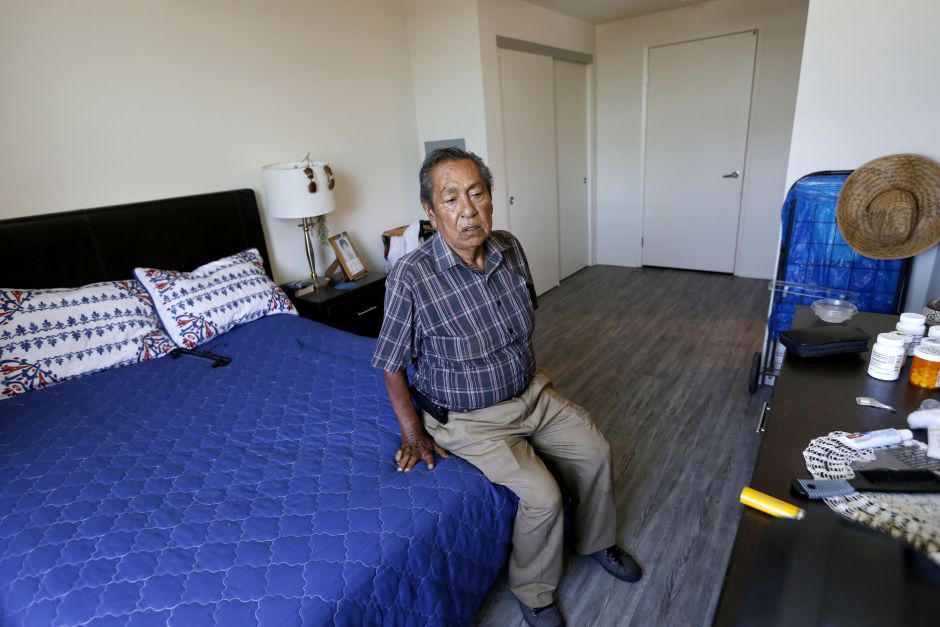 While there are programs that are helping some to obtain a permanent roof, many shelters and affordable housing are missing

Almost seven months ago, Marisela Villalobos has her own apartment in Casa Carmen, a complex of 24 housing units near downtown Los Angeles, built so that the elderly living on the street can have a permanent home.

“Upon entering I felt liberated. I thanked God because I asked him a lot to have his own place, ”says Marisela, 65, an undocumented immigrant who suffers from diabetes, high blood pressure, cirrhosis and psoriasis. She and just over twenty elderly people found shelter in Casa Carmen where each former homeless has a spacious furnished apartment with a recreation room and a patio.

Not all Latino older adults who live in the homeless, have the luck of Carmen. According to the last homeless count in 2019 of the Los Angeles County Homeless Authority (LAHSA), the number of Latinos over 55 who are homeless increased 108% in the last year.

Casa Carmen cost 12.4 million dollars. It was built by developer 1010 Development Corporation and Value Housing II LLC who received a quarter of the cost of the Los Angeles Department of Housing and Community Investment.

“I came from Mexico 25 years ago. I worked as a nanny all my life and had a husband. He left me after 20 years of marriage and went to live with his daughter, ”says Marisela.

When she was unable to pay the rent of the house she shared with her husband, she saw herself in the street. So he spent a year and a half sleeping with friends and even went to a shelter where he lived for just over a year.

“One day I went to a housing fair for the homeless. I made a request. I told them I had no papers. They told me it didn't matter, and that I am winning this new apartment, ”he says.

Marisela recognizes that having a roof changed her life. "I do what I want. Here they give us food every two weeks, ”he talks.

The apartment has a living room, a bedroom, kitchen and a large bathroom with shower. It comes equipped with furniture and a television. "The only obligation is to keep it clean, and we can't get anyone to live here," he says.

Marisela says she doesn't have to pay anything for her apartment. He lives on the 300 dollars that his ex-husband gives him as a pension. "Sometimes an aunt helps me," he adds.

Diseases that lead to homelessness

"I am very grateful," says this Mexican immigrant who has no family or children.

David was born in Michoacán, Mexico. He came to the United States more than 30 years ago. He worked all his life as an ironer in different factories in Los Angeles.

“When I couldn't iron for arthritis anymore, I had a roof until I ran out of money I had saved. I owned a small house, but I lost it when I lost my job and couldn't pay it anymore, ”he says.

Unable to rent a house, he went to sleep in the parks. "The hardest thing about living on the street is the fear at night that they will steal and hit you," he says.

Two years ago, he saw an advertisement for a fair to house the homeless. "I was a joke, but thank God they gave me this apartment," he says.

When he first entered, he acknowledged that it was hard for him to get used to it. “I felt uncomfortable. I am used to living in humility. It made me too fancy. The first night I could not sleep. I was dreaming thanking the Lord, ”says this immigrant whose health is affected by cholesterol, high blood pressure and heart attacks. Walk with the help of a cane.

After living in his vehicle for several months, Alberto Hernández found refuge in a transitional shelter in Los Angeles that offers shared rooms and hot food.

"I share a room with two other people, while I grab a section 8 home – a program for low-income housing – in the next six months," says this 59-year-old angel.

The hostel where he lives is for 45 people. “It's much better than sleeping in the car. There the heat and cold can not stand. Here I sleep very well, ”he says.

Alberto was sleeping in his car in a parking lot in the Glassell Park neighborhood of The Shower of Hope, where they helped him find a place in the shelter.

“Each bedroom has its own bathroom and shower. We have air conditioning, laundry, cleaning service and there are 24-hour guards, ”says Alberto who is allowed to have his pet by his side, a companion dog that alerts him before an epilepsy attack arrives.

This Hispanic born in Los Angeles, the son of immigrant parents, says that the majority of the homeless living in this place are drug addicts.

He was rehabilitated five years ago, but acknowledges that he abused the body when using drugs and was the black sheep of his family. “I drove for 34 years a truck that transported stages for dances. I used coca and marijuana. I thought life was going to be eternal until I hurt my waist. I've had three surgeries, ”he says.

He was married to a woman who gave him five daughters. Their union collapsed and stayed in the street for the first time. "I did not develop a relationship with my daughters because I was in a crazy life," he says.

“The first time I was homeless, I went to sleep in my car in Hollenbeck Park. After three months on the street, I rented a room for three years until they threw me out. A sister from my parents' house also threw me out, ”he explains.

Due to a disability that forces him to use a cane, he receives $ 900 a month from the government. "The least they charged me for a room was $ 500, I had $ 250 left to eat, I preferred to sleep in my car and thus have more money for my food," he says.

Having a roof changed his life. “It has made me think positive. The first night, I didn't want to get up the next day. I had a long time without sleeping in a bed, ”he says.

Alberto says that many homeless people don't want help. “Like my brother who is 48 years old. He does not want to rehabilitate or stop drugs. He is a chronically homeless. He prefers to live on the street than to have a place to live. He doesn't know another life. When they gave me a room in this hotel, I donated my car to live there, ”he emphasizes.

Alberto recognizes that when an addiction is suffered, people do not think about eating or children. "There are government supports. If one wants, he is rehabilitated. I tried everything. In addition to coca and marijuana, mushrooms, peyote and stone. Methamphetamines are the most addictive there may be. You feel like every mother, but when you are addicted, the money goes away in the drug. I robbed myself", He says.

And he attributes the increase in the number of homeless people largely to addictions. “When you are well involved, you do not want to enter a rehabilitation program. You say, how can I not stand the desire to use drugs, ”he says.

It will get worse

Alberto believes that helplessness in a crisis that will get worse in Los Angeles. "It will get worse from drug use. More now with the legalization of marijuana. What happens is that you start with the speck, and from there it is easy for you to put other stronger drugs, ”he notes.

Mel Tillekeratne, founder and director of the non-profit organization The Shower of Hope which has achieved two parking lots, one in Glassell Park and one in WestLake, in the city of Los Angeles, said the parking lots are for homeless people with vehicles like Alberto to park and spend the night safely. He also adds that they help them find a home as much as possible.

"It is not a guarantee, but we do everything we can to accommodate them in motels that become a transition home, while they find permanent housing," external. They also offer mental health services, addictions, substance abuse and assign them a social worker to travel with them the transition to a permanent roof. ”

For Mel, with many years as a defender of the homeless, The main reason of the increase of the abandonment have that watch with the crisis of living place accessible in the Angels.

“Latino older adults live with a fixed income and low wages, when they increase their income 100, 300 or 500 dollars, they cannot continue paying, and since there are no protections for the tenants, they are easily evicted,” he says.

This, he continues to explain, has resulted in many evictions mostly of Latinos in Boyle Heights, East Los Angeles, Pico Union, Lincoln Heights, West Lake, areas where the gentrification It has been stronger.

Homeowners are taught by the undocumented, giving them exhorbitant increases because they know that, due to their immigration status, they don't complain, Mel adds to explain why the increase in the number of indigent Latino elders.

"The state law that they will pass in California to put a cap on rent increases of up to 8%, including inflation, is not enough, but it is something in front of increases of 20%, 30% or more ”, indicates.

Mel predicts that the homelessness crisis will worsen even more.

"More shelters are needed, an end to illegal evictions and build more accessible housing. But I don't see any of this coming, and a recession is coming that will increase the number of homeless. Simply save any middle class person, you run the risk of not being able to pay your rent if you get sick, 'he emphasizes. "All you need to stay on the street is to get sick," he says.

On Tuesday, look for the last of five parts of the series on homelessness: There is hope, immigrant leaves homelessness to become a carpenter

Urge to collect information on race in cases of coronavirus