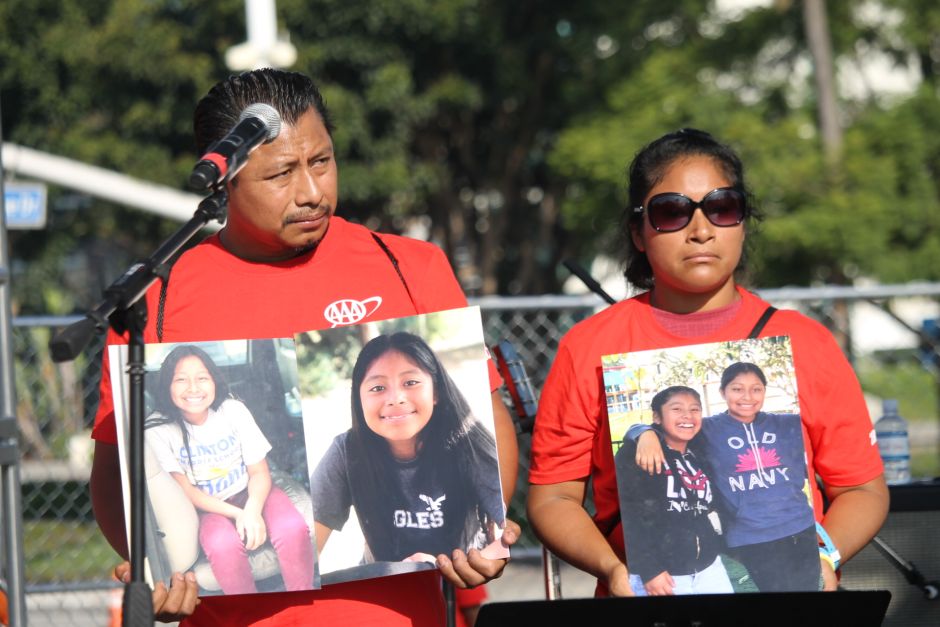 Families victims of irresponsible drivers still mourn their loved ones

The pain of the Lorenzo family is still alive. They have not recovered from the death of the girls Amy and Marlene, who were hit by a distracted driver, on April 4.

This Saturday, at Marina Green Park and on the banks of the pier on Long Beach Beach, the Lorenzo family and 2,000 other people participated in the second annual walk to raise awareness about the dangers of distracted driving.

"My message is that people take their responsibility," said Tony Lorenzo, the girls' uncle. "Driving and texting endangers everyone's life."

"Our goal is to save life and prevent injuries by ending the sending of text messages, emails to program GPS, search for music or download social media applications or use smartphones when people drive," said John Boyle, president from the Southern California Automobile Club. "We are committed to achieving this task by reminding people that using a smartphone when one is behind the wheel can result in the same tragedies as when driving drunk."

According to statistics from the National Highway Traffic Safety Administration (NHTSA), in 2017 distracted drivers killed 3,166 people in the United States. This figure represents an average of nine deaths and 1,000 people seriously injured each day.

"One of the biggest dangers we have seen is that people, when they reach a traffic light and stop, think it is an opportunity to use the phone and send text messages," Sergeant W.R. McDonalds of the Long Beach Police Department.

However, he warned that texting is the most dangerous type of distracted driving, since it combines the visual, manual and cognitive distraction of the person.

A recent survey of adults from the Southern California Automobile Club found that those who are more likely to handle and send text messages at the same time are people between the ages of 25 and 39. These individuals said they send an average of 50 text messages every day.

The same study revealed that one in 10 drivers in Southern California admitted that they regularly send text messages when they drive.

Other motorists who represent a danger in the streets and highways are those who drive aggressively and speeding, such as the driver who killed Deanna Maurer, 23, on April 27, 2017.

"Traffic had stopped on Highway 405 in Westminster and the lady who caused the accident was driving at 87 miles per hour," Howard Maurer told La Opinion. "She never set the brake."

In a first trial, the jury was stalled 11-1, but in a second trial – and after four years of litigation, Jorene Nicolas, 34, received a six-year sentence in jail.

"In the investigations it was determined that she had sent 14 text messages to her boyfriend," recalled the parent carrying a picture of his daughter. "The problem we all face is not about an economic fine for distracted driving, the problem is about lost lives"

Next to Howard walked his wife Dawn. She also carried in her hands an image of her daughter.

"I miss her voice every day, like when she called me to say‘ Hi Mommy, I'm coming home, "said Dawn. "Deanna was my everyday light."

Another indirect victim of distracted drivers was Darius Mehta, an engineer from Rancho Palos Verdes, who walked the three miles of the route on behalf of his wife Deedee Gonzalez, who miraculously survived a spectacular accident caused by someone driving and talking on the phone . To her, doctors placed more than five metal screws to attach some vertebrae.

"My wife is still in rehab to live a life that will never be normal again," Darius said. "I don't think anyone wants to be involved in an accident, but I do believe that people should be educated to understand that in a second of distraction they can change their lives and that of others."

At Marina Green Park, organizers placed 1,009 pairs of shoes representing people who died or were injured by distracted, drunk drivers or under the influence of drugs.

At the Brooklyn Navy Yard, Frenchmen in the "war effort" against...

"They asked me to put a hot dog cart that exploded...

They will press for a new California Supreme Court magistrate to...