Home Latest News The march of October 16, 1994 was the first mass demonstration of... 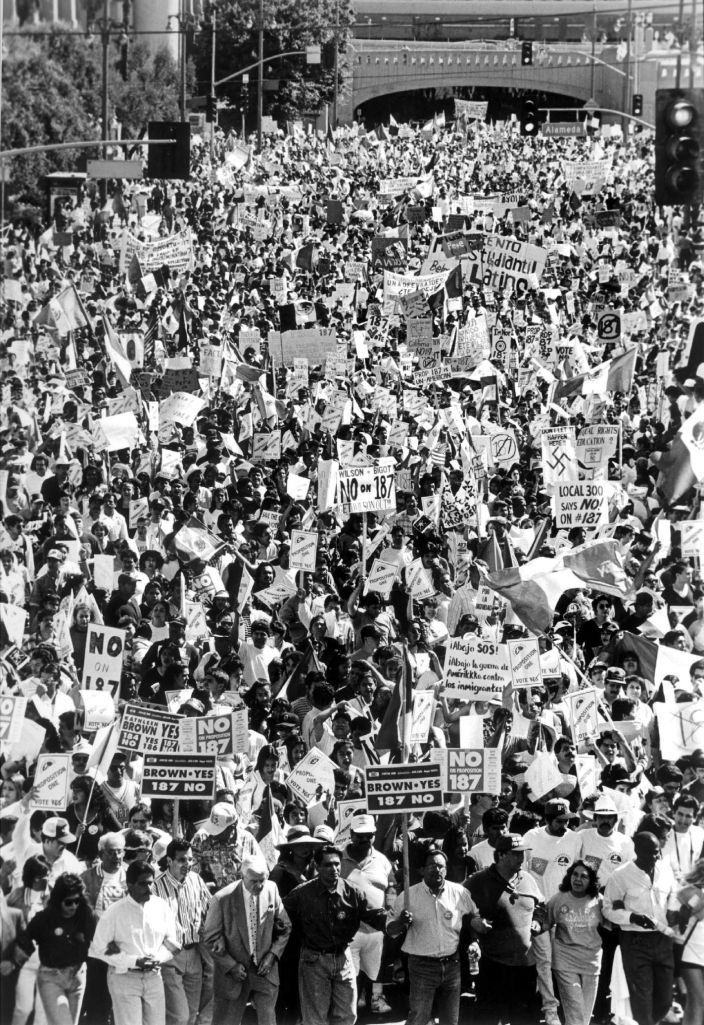 It is very important that Latinos do not forget what happened with Proposition 187 in 1994 so as not to fall into the same mistakes, says María Luisa Arredondo, the reporter in charge of the source of migration for the newspaper The opinion during the times of the measure I wanted to deny undocumented immigrants access to education, health and social services in California.

“It was really a time of much political turbulence. There was an economic crisis and as always, the situation was taken that there were strong economic problems for a small group of ultraconservatives in Orange County to meet to shape Proposition 187, ”he says.

At first, he says that in the newspaper The opinion They did not think that the proposal had a future because they saw it as very extreme, but to their surprise, the movement was growing when it was embraced in a very intense way by the governor of California, Pete Wilson.

“He saw it as an opportunity to stay in power and what better than blaming the most vulnerable immigrants, the crisis and unemployment. What happened is that a tremendous division began and there were even Latinos who supported it, ”he adds.

And although, he explains that the majority of the population demonstrated against it, some of their friends who were already citizens and had an established life, voted in favor of Proposition 187.

The journalist says it was impressive to see thousands of undocumented people go outside for the first time to demonstrate.

“They didn't mind giving a face. I had never seen anything similar in Los Angeles. Official estimates indicated that in the mass march of October 16 – a few weeks after voting for 187 – 75,000 people attended, but activists speak of 150,000. Before that demonstration, there was no such thing as closing streets for a massive protest in Los Angeles, ”says Arredondo, an immigrant from Mexico City.

"Before that march, the demonstrations that I had seen gathered 40, 100 people, and it was a lot," he says. "It was incredible the work of the media, radio and written press, and the union of many organizations in defense of the undocumented."

Arredondo, who reported for The opinion, the massive march says that he could see the despair in the face of the undocumented who marched.

“It is that if they did not defend themselves, they would lose all their rights. What would they do with their children without going to school? They wanted to deny them the right to education. Taking to the streets was his last letter before a proposal that was about to be approved and would have created a population of the fifth class. They were not going to be entitled to anything, ”he says.

The march of October 17, remember, was peaceful, but very firm. “The message was that they were not going to cross their arms in the face of an artful attack. ‘Here we are and we are not leaving, because we are not criminals. We are contributing and we are good people. The march was also joined by Central Americans and South Americans, ”he recalls.

Arredondo claims that there was a great unit. “Many high school, high school students, parents worried about the future of their children participated, until Republican Ron Unz joined the march because he disagreed with Proposition 187, which he considered a monstrosity that undermined basic principles such as morality".

New leaders emerged from the movement against Proposition 187. “Juan José Gutiérrez, director of One Stop Immigration He consolidated himself as a leader, ”he says. But new characters emerged as Kevin de León, Fabián Nuñez and Gil Cedillo himself. “Already then Hilda Solis, Richard Alatorre and Richard Alarcón actively participated in politics. Among the organizations, the presence of CHIRLA, MALDEF and the United Farm Workers Union (UFW) stood out. ”

And he emphasizes that Cardinal Roger Mahony, who was archbishop of Los Angeles, played a very important and leading role in the fight against Proposition 187. “The Catholic Church was very active in that movement and its participation to defeat the measure was key” , highlights.

Arredondo had the opportunity to interview in Sacramento the main driver of the measure, Governor Pete Wilson.

“He was an opportunist politician. He knew well that immigrants were not the cause of the economic crisis. But to re-elect it was easy for him to blame immigrants and cause terrible damage to the state. Proposition 187 was absurd. ”

Comparing the years of Proposition 187 with the current era under the Trump administration in which again immigrants are under attack in the midst of a climate of constant threats and actions against him, he argues that at the time of 187 there were more unity in the Latino community around the undocumented.

“There was even more awareness when there were Latinos who supported Pete Wilson. At present, we see how people have been divided. Many Latinos don't care about the fate of people even when they see separated families and caged children. ”write down

For this journalist, Proposition 187 made people aware and those who had the opportunity to become citizens did so and were able to vote. “At that time, many Mexicans did not want to be US citizens because they felt it was like betraying their origin. But the 187 made them change their minds and opted for citizenship to vote, ”he remarks.

The increase in the number of citizens was one of the most important changes that brought the fight against the measure, but also the absolute rejection of the Republican Party. "He died from there, and California turned blue (Democrat)," he emphasizes.

Arredondo believes that the most relevant lesson that Latinos learned from Proposition 187 was that thanks to the unity and power of voting, they have more rights. “We have to exercise the exercise of voting, not be discouraged and believe in us. Trump is doing nationally what Pete Wilson did in California in 1994. What will be the future of the Republican Party in the country? ”He asks.

Is Philly a good place to live in your 20s?

What is the richest part of Charleston?

What is a good salary in Puerto Rico?