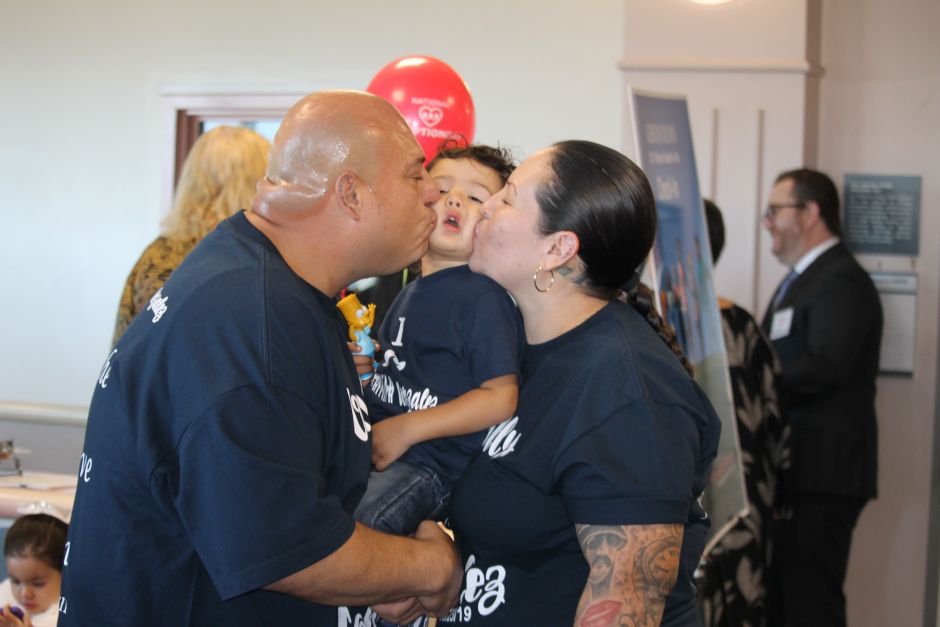 Zelali, Zyara, Zyada, Zachaeus, Zerenity, Zavier and Zethal are the seven little ones, between 4 and 11 years old, who can now legally call their grandmother Maribel Orozco "mom."

Sitting on a bench in the Edmund D. Edelman children's court in Monterey Park, the little brothers and their grandmother waited patiently for their turn this Saturday to appear before a foster care judge in Los Angeles County.

The signing of documents in place, closed the final process of its adoption.

“All my children are very intelligent; I have to give them the opportunity to pass (overcome) this, ”said Orozco, who was widowed just two years ago.

She said that her husband, Oscar, had a cardiac arrest and that he now takes care of all the children of his daughter, Suna Sashua.

"It's very hard for children to be taken away from their mother," added the woman born in Nayarit (Mexico) and raised in Mexicali. "They have to process everything that has happened, to gain self-assurance."

Problems in the life of the biological mother of the minors, led to the grandmother fighting for custody.
She indicates that she just wanted to save them from a dark future.

With his four children and grandchildren, today also legal children, Maribel's family – who lives in Pomona – grew to 14 people.

His 24-year-old son, Michael, whom the three boys and four girls call ‘Daddy’ is the one who helps him raise the children. His daughter-in-law Michele also collaborates.

"I give them love as I can," said Michael, who is not surprised that his nephews call him "Daddy."
Meanwhile, the grandmother says that "if one day her daughter is composed", she will have no problem to approach her children.

The opportunity of a new home

This event is held in the 50 states of the country and in the District of Columbia.

This program grew under the inspiration developed by Michael Nash, former president of the Children's Court, in collaboration with the Alliance for Children's Rights, the Department of Children and Family Services of Los Angeles County (DFSC) and the non-profit organization Public Counsel.

"Every time an adoption is given, it is a wonderful day," said the presiding judge of the Children's Court, Victor H. Greenberg. "Each family reunited went to the last step to obtain legal custody of the children."

Greenberg said that the celebration of the 20th National Adoption Day in the halls of the same courthouse where the whole story began, represents a great reflection on the collaborative efforts of individuals who made children's dreams come true to find them a stable family forever.

For some, the process was calm and for others there were obstacles along the way, until reaching the final step.

"It doesn't matter how you got here, what matters is that you committed to your love to create a family for children," said Cynthia J. Billey, director of the Adoption Program at the Alliance for the Rights for Children and one of the cofounders of National Adoption Day.

"Throughout the history of this event, together we have been able to create that link for thousands of children," he added.

Indeed, the opportunity to have a new family and a safe home was given to the little Jasmine, 10, Jaylah, 6, and Jazlynn Lopez, 5. Her mother is now her aunt Betty Lopez, a Whittier resident.

“There was negligence of the parents. They lived in motels and I only know that the father had a (criminal) case, ”he said.

And how did the girls arrive for you to have them in custody?

"I answer," Jasmine said suddenly. "Mom didn't take care of us," he said.

Since the adoption program in Los Angeles opened in 1997, more than 39,000 children living in foster homes have seen their dreams of being adopted materialized and are already living in safe and permanent homes.

That is what happened on Saturday to little Victoria Campos, 8, now the daughter of Guatemalans Alma and Aroldo Campos.

Aroldo said that he had two stores where he sold all kinds of items in the city of Long Beach and that a couple, his clients, were the girl's parents.

"They were on drugs," Aroldo reported. "I gave them a vacuum to clean carpets in the houses, but when they started to make money they used it badly."

One day, says the man, Victoria's father asked to speak with him. He wanted the merchant to adopt the girl he had lost to the Department of Children and Family Services.

"I said yes and we started the adoption thinking that he would get up to get out of drugs but that didn't happen," said the Guatemalan.

His wife said he agreed to adopt the little girl "as an act of love that moved my heart to take something that is not yours."

Shana and Francisco González, residents of the city of El Monte, their biological children and many relatives jumped for joy when Judge Karin Borzakian concluded the legal rite of adoption of little Angel Jeremiah, only 2 years old.

"The boy had to heal from birth," Francisco said, moved to tears. "He was born addicted to drugs … By the first week he already had problems."

The man, originally from Jalisco (Mexico), said that the body of the newborn boy was shaking but that after seven days the doctors who treated Angelito could control him.

He added that the child's parents could not take care of him and that during pregnancy, the birth mother did not stop using drugs.

In the courtroom, Francisco, his wife Shana and their children Raylene, Francisco Jr., Victor and Samantha, as well as other relatives and friends celebrated with shouts of jubilation and filmed the historic moment for their memories of happiness.

All were dressed in a gray T-shirt, with a message in large letters that said: "Officially a Gonzalez", alluding to the new name of the mischievous.

The boy proved to be very loving since when Judge Borzakian stood up from her chair and addressed the family to congratulate her, the boy also ran to give her a hug.

Shana Gonzalez thanked God for instilling in her heart a biblical message from the prophet Jeremiah that everyone had in their navy blue shirts: "Because I know very well the plans I have for you."

"In truth, God already had a plan for him," said the adoptive mother.

Inside the courtroom, Francisco cried once more. He thanked his own children for the moral support they gave him to rescue the little Angel from an uncertain destiny.

Know some guidelines for the adoption of children

The entity indicates that to be a foster or adoptive parent, everyone is welcomed regardless of whether the person is single, married, divorced or only lives with their partner.

In its web portal it indicates that resource families can live in an apartment or house, either their own or for rent.

And he adds that they can be of any race, ethnicity, religion or sexual orientation.

Latino families interested in child adoption can call the Los Angeles County Foster and Adoption Care line at 1 (888) 811-1121 or visit the Spanish-language website at: www.FosterLAKids.com

Coronavirus shuts down mariachis and leaves them jobless in Los Angeles