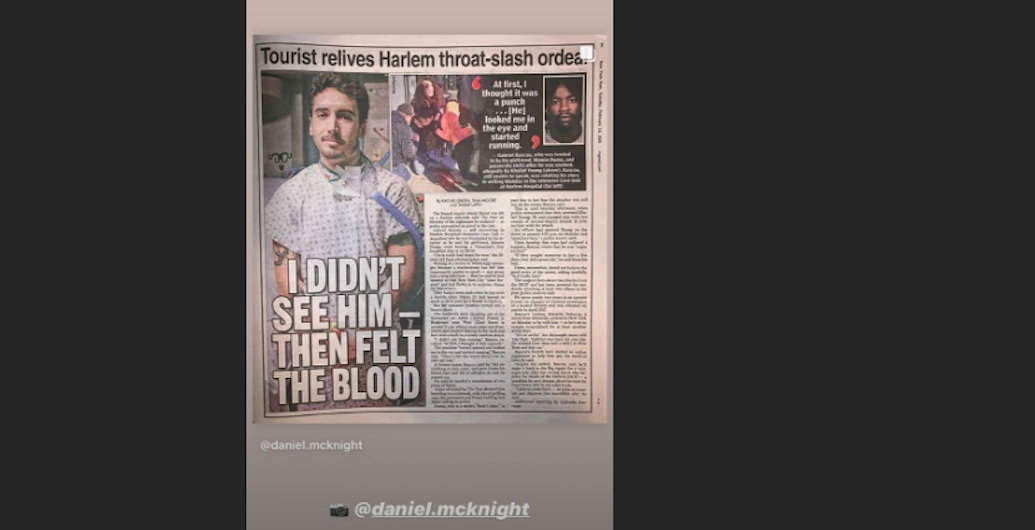 "I'm extremely relieved that the police found him so quickly, especially since we don't know his motives“, Says Gabriel Bascou.

The 27-year-old Frenchman talks about the man who is suspected of assaulting him on Friday, February 14, while he was on Adam Clayton Powell Blvd Jr. (Harlem) with his girlfriend Manon. The suspect, a 28-year-old man who has already been arrested for similar assaults, is accused of stabbing him in the neck for no apparent reason. "I first thought it was a punch before I felt a lot of hot blood run down inside my coat. The man looked us in turn and he ran away ”, explains the Frenchman.

The latter spoke to French Morning by email. And for good reason, if his days are not in danger, he is still hospitalized at Harlem Hospital with a tracheostomy, an opening of the trachea which makes it easier to breathe. "I lost the surface sensitivity of part of my face ”, says one who says to himself “not bad physically damaged". "I am also exhausted because we meet a large number of specialists and people who contribute to our care throughout the day. All these people are very human and very compassionate with us“, He specifies. Always “Connected to a monitor“, He has not yet been able to leave his room in intensive care.

Gabriel Bascou, a photographer from Montpellier, did not know New York. He came to see his girlfriend who has been working there for a month. "I always dreamed of coming there and I waited for Valentine's Day to surprise her, he explains. This attack took place during my first 100 meters in New York. So I saw nothing of this beautiful city. ”

A video showing him kneeling in the street, taken care of by New York rescuers with a bloody neck, was posted on the site of the New york post and other local media. "These videos are an important part of the investigation today. I'm glad they were filmed".

After the attack, the Frenchman received numerous messages of support on social networks – he posted messages on Instagram and Facebook to tell about the attack and share his state of health. Relatives joined him at the hospital, and friends in France launched a kitty to help cover the costs of hospitalization. "This kitty is on the initiative of my friends feeling helpless and wishing to support us from where they are. We will know more about the treatment while the different players agree (private insurance, New York City etc …) but now is the time to worry about my state of health ”, explains Gabriel Bascou.

He does not yet know when he will leave the hospital to return to France. "We have received and continue to receive an astronomical amount of messages of love and supporthe said. It gives us incredible strength".

They will ask for justice by Andrés Guardado: they announce a...

Nicolas Sarkozy guest of the gala of the Sciences Po American...