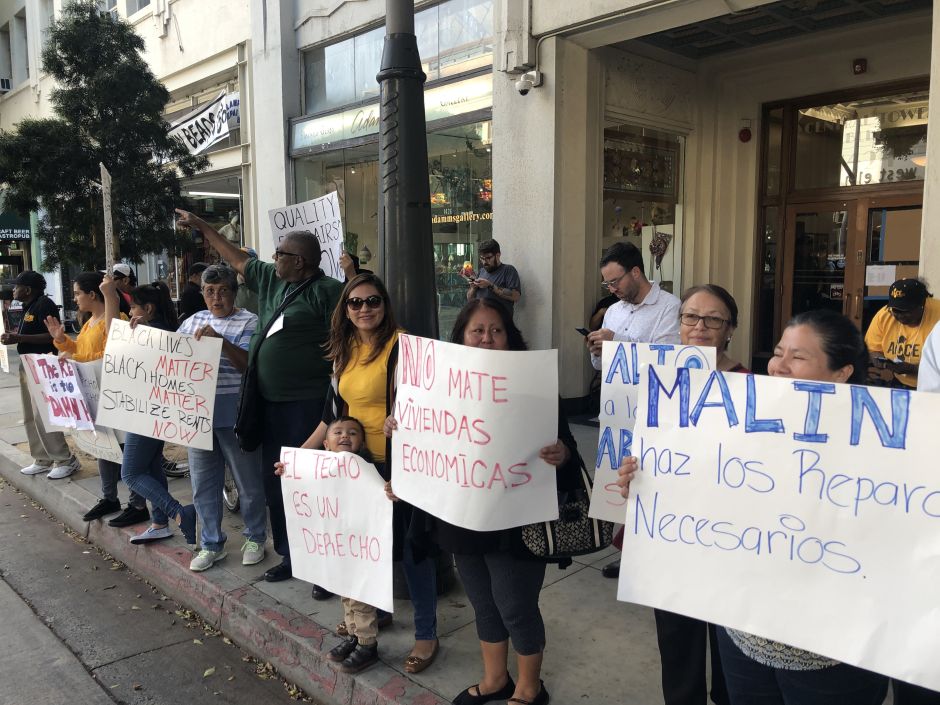 They don't want to leave their low-income apartments; the owners want to rent them to those who can pay more

At least about ten low-income families living in front of the University of Southern California (USC) in Los Angeles are in danger of losing their homes due to the rent hike they suffered this year.

Sergio Vargas, organizer of the Alliance of Californians for the Empowerment of the Community explained that Adrián Malin, owner of Malin Asset Management has given in the last seven months, two rent increases to tenants who are mostly elderly from low income and families that are under the section 8 program, which subsidizes housing for low-income people.

"The average increase has been approximately 150% for each tenant”He explained.

And he pointed out that the tenants had to request to the officials of the city of Los Angeles, emergency protections to ensure that the actions of the owner did not put them on the streets during the holiday season.

"The City acted quickly and approved moratoriums for evictions without cause, as well as assistance for the payment of rent during November and December," he said.

"The tenants ask the landlord to respect the maximum increase in accessible housing established when he bought the building," he said.

Affected neighbors live in buildings 4040 and 4060 south of Hoover Street. For 30 years, these properties were for people with limited resources, but when the contract specifying their use expired, the new owner bought them.

In September, another increase of between $ 2,350 and $ 2,850 was applied again per month that would begin to be paid this November. "The letter sent to the tenants indicated that they should pay the increase or leave," Vargas explained.

And he said the owner wants to vacate the buildings to rent the apartments to students at the University of Southern California (USC). "Six families have already left," he said.

“I don't have a place to go. I have lived here for more than ten years. If they kick me out of here, I'm going to the streets, ”said Olga Ford, an older adult who lives in the 4040 building on Hoover Street.

Vargas said that with the relief approved by councilwoman Nury Martínez, residents can pay the difference between what they paid and the rent increase for the months and November.

In January, Act AB 1482, which establishes rent control in California for the next decade, enters into force. Rental homeowners may only increase an existing tenant up to 5% plus the inflation rate.

The new law makes it harder for a landlord to throw a relative without having a legitimate reason.

“What the neighbors want is for the buildings to remain low-income because they have fixed incomes. But the owner does not want to negotiate with the group but individually, ”said Vargas.

18 years ago that Aída Rivera lives in one of the Hoover buildings with her older sister, a daughter and a 22-year-old nephew, in a three-bedroom apartment. “We paid 837 dollars, but as of April we were raised 1,650. For this month of November it increased us to 2,800 dollars. Then he sent us another letter saying we only gave him $ 1,650, ”he said.

"It is very difficult. I earn the minimum wage. My sister is retired and does not have a good income. My daughter and my nephew study college and work, but it barely reaches us. We don't have the money to pay so much money for the rent”He commented.

He added that the owner has offered to go to another apartment with two bedrooms that he is going to get. "We don't want to move from here," he made clear.

The opinion He is waiting to have a comment from the owner of the buildings, Adrián Malin.

Vargas says the rent increases are motivated by the greed of the owners and the gentrification that has occurred around the USC. "They want to throw low-income people to collect much more rent," he said.

Billionaire Elon Musk sold one of his homes in Los Angeles...

Books of hope travel from LA to a town in Nicaragua

Aid to companies in the US: find our entire webinar

Hispanic signs the advancement of the coronavirus in Los Angeles