Home News & Politics From California, Emmanuel tries to get the swing states to vote 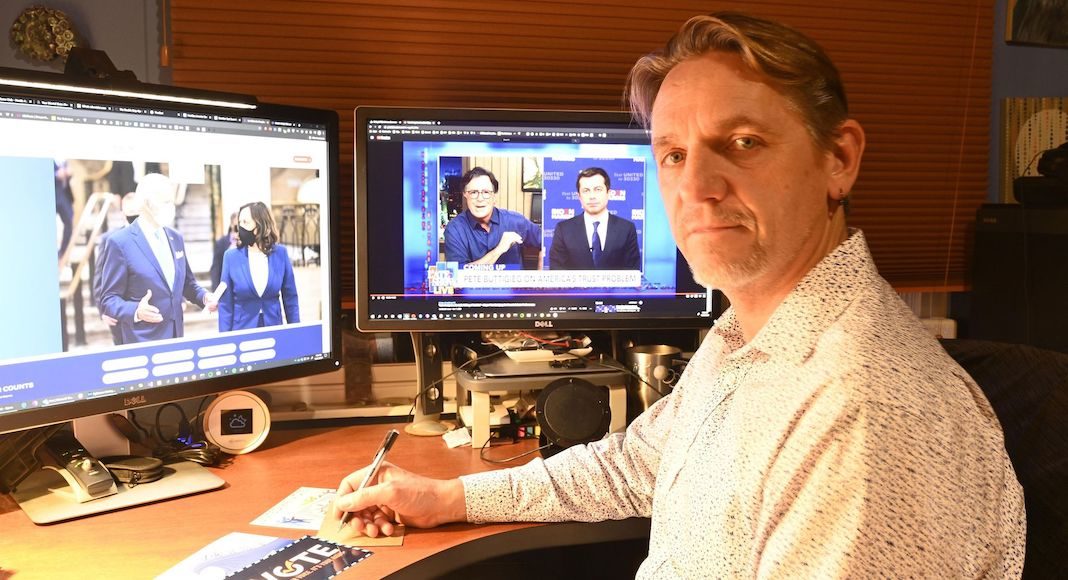 French Morning continues its pre-election series “Me, French and American voter”. We are going to meet bi-nationals across the country who will help us discover the challenges of the election, and the specificities of the system.

Emmanuel Schnetzler, an American since 2008, has never failed in his civic duty, but this year he has decided to get particularly involved in supporting the Democrats’ campaign and giving them every chance of winning the presidential elections. He dares not imagine four more years with Donald Trump in the White House: “It would be dramatic for the country, from an economic, racial, environmental point of view … Now we know what Trump is capable of, and he has free rein: we have seen that the Republicans do not have the courage to oppose him.”In 2004, when he did not yet have the American citizenship which gives him the right to vote, Emmanuel Schnetzler accompanied his American wife to Florida, to go door to door and convince voters not to leave George W. Bush is serving a second term. “In retrospect, he wasn’t so horrible as Trump“, He underlines with mischief.

For the geologist from Alsace and living in San Francisco since 1997, Trump owes his election in 2016 to two main factors: absenteeism, and the voting system based on the electoral college. This is made up of 538 electors, who appoint the President and Vice-President of the United States according to the votes cast by American citizens. Through the laws which govern its composition – and particularly the “winner takes all” system, which gives all the votes of a State to the one who arrives at the top, whatever its advance – the electoral college gives more weight. important to votes from rural states, traditionally in favor of Republicans.

“This system annoys me, because the vote of some does not have the same weight as others. It’s like I have no voice, cause I’m in California“, Notes Emmanuel Schetzler, not without bitterness. “We must therefore try to influence voters, through different means: support the Democrats by donating money for their electoral campaign, and try to get as many voters as possible to vote in the swing states.In 2016, it would have been enough for 100,000 more people to vote to tip some swing states and for Hillary Clinton to win.

A few months ago, a friend of Emmanuel Schnetzler suggested that he take action, by organizing a massive mailing of postcards intended to encourage voters to vote. The approach is non-partisan, recipients are reminded that they must go and vote, but without forcing them to choose a candidate. “We make the effort to write these cards by hand, which creates a stronger connection than a simple flyer. We are targeting voters who are potentially Democratic, or who have declared themselves as such, when they registered on the electoral roll. In Florida, we wrote to people who had been convicted and had served light sentences to remind them that they did not lose their right to vote.”In addition to Florida, around 18,000 postcards went to Georgia, Kansas and Pennsylvania thanks to the work of Emmanuel Schnetzler, and the thirty or so volunteers he was able to rally. “The success rate is uncertain, but the energy of the group that got down to writing the postcards with me was really motivating.”

After postcards, this native Alsatian switched to mass texting, still hoping to get more people to go to the polls: “The people receiving the texts can ask questions, which we try to answer by following a script. This method of communication is particularly effective with young potential voters.”

A few days before the elections, Emmanuel Schnetzler wants to be optimistic, even if he admits to sleeping badly. If Elizabeth Warren was his first choice on the Democratic side, he had no hesitation in supporting Joe Biden. His ballot is already in the ballot box.

Is moving to New Orleans a good idea?

What is Boulder minimum wage?

Can you buy air rights?