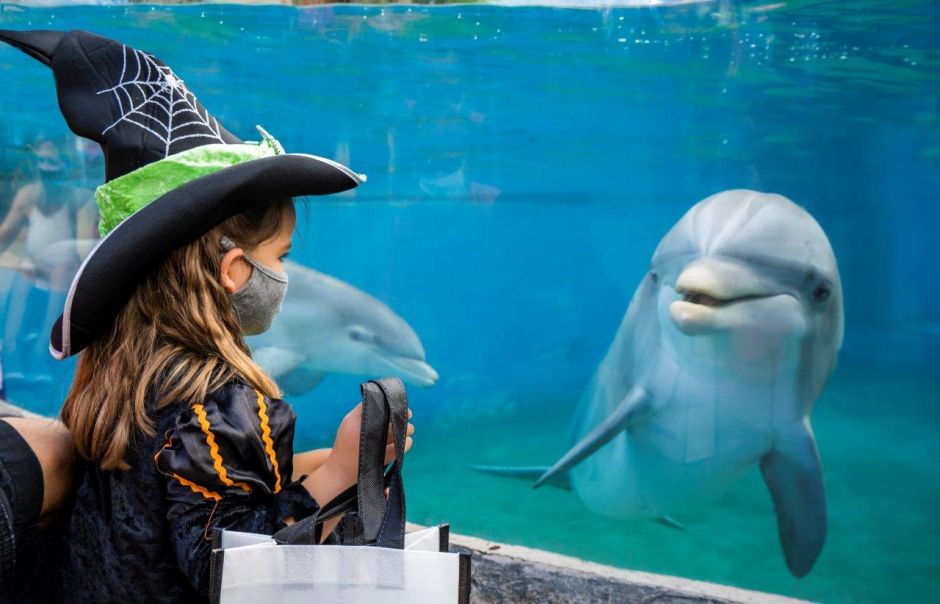 The Colombian singer-songwriter Andrés Cepeda will offer a live concert in an unusual place. The Salt Cathedral of Zipaquirá, 180 meters below the ground, in Colombia, will be the setting. It is a wonderful and majestic church located in the heart of a mine.

Cepeda and a team of 70 people will install instruments, amplifiers, cables, lights, mapping and all the experimental mystique in the naves and the water mirror of the cathedral. The artist will tour the different spaces of the place and will walk through the sounds that have accompanied him during his career; He will perform the hits of his albums, with his entire band, in three acoustic, rock and tropical formats. Friday 6 pm Pacific Time. Tickets $ 10.75. Reports at eticket.co.

The SeaWorld theme park (500 Sea World Dr., San Diego) partially opened its doors, so now that the end of the year holidays are coming it is celebrating – with all the health precautions – SeaWorld’s Spooktacular, a party that will take place from Friday to Sunday until November 1.

During the new Sesame Street Halloween Dance Party, families can dance and at the same time take photos of the characters from this television series – including Count von Count – who will wear their Halloween costumes in colorful allegorical floats. Plus, at the Spooktacular Fun at SeaWorld, kids can don their costume and enjoy Halloween parties as well as visit some of the animals that live at SeaWorld. Throughout October, all children enter free with the payment of an adult ticket. Adult ticket $ 93.99. Reports seaworld.com.

Art at the Getty

The Getty Center and the Getty Villa remain closed, but both cultural venues offer a wealth of opportunities for inspiration with a free virtual program that can be enjoyed from home. This is some of what is available this week: Today, in the program Children in detention: LA Artists Respond to the Policy of Family Separation, the film “The Story of Mateo” will be shown, which follows the journey of a family when they flee from Central America to the United States. Artists Rafa Esparza, Sandy Rodríguez and Gala Porras-Kim – currently artists in residence at the Getty Research Institute – will join filmmaker Malona P. Badelt, who made this work, in a conversation at the end of the presentation. This will be from 1 to 2:30 pm Pacific time.

And on Sunday, on “Nourishing Genius: Food and Wine in the Time of Michelangelo,” Fred Plotkin, specialist in Italian gastronomy, opera and history, and Julian Brooks, curator of Getty drawings, go back in time to explore the fascinating connection between art, food, drink and Michelangelo, the incomparable Italian Renaissance artist who used to eat at the table with potatoes and other diners, and who also owned vineyards, a cheese cellar and a farm. Free. Sunday 2 pm Pacific Time. Details at Getty.edu.

At Home with Gregory Nava

Dan Guerrero’s Happy Hour in the series En Casa con LA Plaza, from the LA Plaza de Cultura y Artes, will have as a guest Gregory Nava, director of films such as “Selena”, “My Family / Mi Familia” and “El Norte ”.

In this live conversation on Zoom and Facebook, Guerrero and Nava will talk about the work of the filmmaker, who was nominated for an Oscar for “El Norte,” and who also received an Emmy nomination for the outstanding television miniseries “American Family ”. Free. Friday 7 pm Pacific Time. Information and reservations on lapca.org.

The time for costumes has arrived, and although health authorities recommend not letting your guard down due to coronavirus infections, Legoland (1 Legoland Dr., Carlsbad) has already taken the necessary health measures to receive visitors to its Halloween event in Miniland.

Every Friday, Saturday and Sunday in October, this portion of the theme park will be available for legofans to enjoy the millions and millions of bricks that these miniature buildings are made of. This not-so-spooky party features activities, tasty treats, and Lego decorations. Children and their parents can wear their favorite costumes. Lego characters will also be there to greet visitors, there will be a virtual costume contest, a Miniland scavenger hunt, building construction with legos, and visitors will be given a bag with candy and a surprise Lego. The Sea Life Aquarium is also open and decorated with Halloween legos; many will be underwater. Friday from 3 to 7 pm; Saturday 10 am to 2 pm, or 3 to 7 pm, and Sunday 11 am to 3 pm. Tickets $ 12.99. Reports legoland.com/california.

Disco in the morning

Disco music is also danced during Hispanic Heritage Month, and in honor of this celebration the Daybreaker site will host Let’s Dance — Let’s Dance! a dance session that will be accompanied by Latin music from some of the most iconic contemporary Hispanic artists.

On Saturday, from 11 am to 1 pm ET, the party kicks off at Zoom with a Zumba session for all ages. It will be offered by the creator of this technique with the rhythms that DJ Jellybean Benítez will create, who will curate a mixture of Latin sounds – such as salsa, merengue, mambo, rumba and bachata, among others. Then a remake of “Rhythm Is Gonna Get You ”, one of Gloria Estefan’s greatest hits, followed by the performance of the“ Macarena ”dance with Los Del Río. Finally, there will be a presentation of The Wailers and the Gipsy Kings. Free with reservation. Reports daybreaker.com.

Kendji Girac in concert in Miami

French Boss, episode 9: there is no age to undertake

Despite the pandemic, they are getting married in an outdoor religious...

Father and daughter kidnapped, raped and let a woman die in...