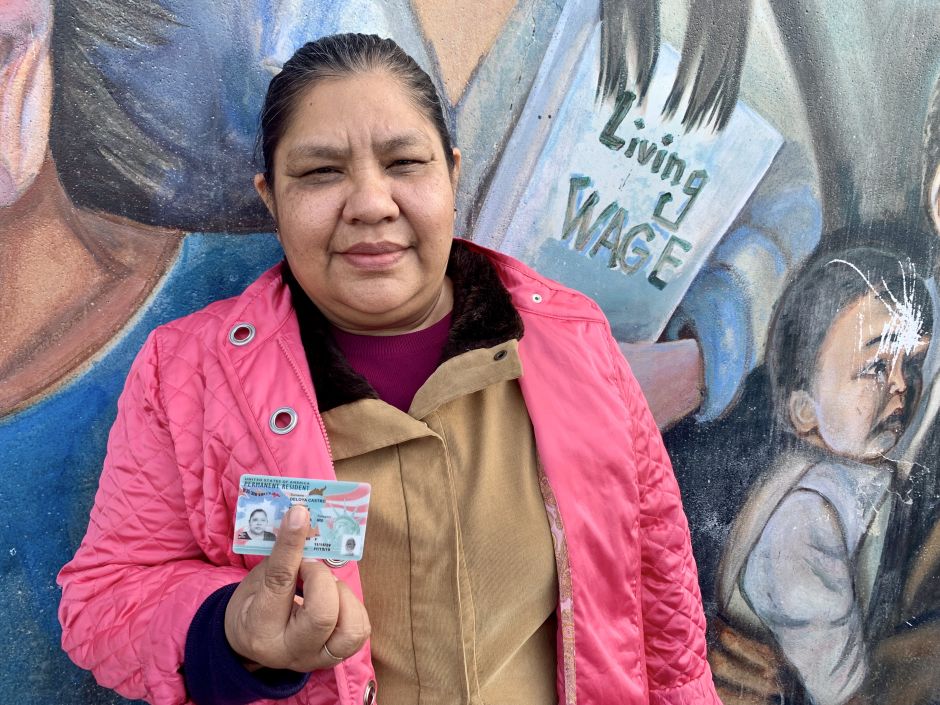 Three decades after emigrating to the United States, an undocumented mother managed to obtain permanent residence thanks to a request from her army reserve daughter.

“When my daughter handed me the permanent resident card, I couldn't believe it. I had it in my hands, but I wasn't sure it was the residence. I didn't want to get my hopes up, ”says Blanca Estela Deloya Castro, the new U.S. resident.

It wasn't until his daughter Mariela Silva told him that the card was real, that he began to believe that his life in the shadows was over.

“I was very excited. I cried with joy, ”recalls this mother.

It was his daughter Mariela who received the correspondence that day, and opened the letter where the residence card came from.

"It gave me a lot of joy," he says. So much that he immediately called his parents to see where they were. He took his little baby, and went to wait for his parents at the truck stop to give them the good news.

To help the family

His mother Blanca Estela Deloya Castro came to the United States in 1988 when she was 22 years old.

“I am from a town near Ixtapa in the state of Guerrero. I went to Tijuana with the intention of helping my mother and my little brothers. There is not much way to make a living. There are not many sources of employment, ”says Blanca Estela.

After a few months of working in Tijuana, he crossed undocumentedly to California.

Years later in Los Angeles, he met Antonio Silva, also a Mexican immigrant. They married and had two children, Mariela who is now 26 years old; and his son Antonio, the oldest of 29 years.

When his daughter told him when he finished high school, that he was going to get into the Army Reserve, Blanca Estela acknowledges that he was very worried, but he couldn't help her doing her will.

“At 19, I had no idea what I wanted to do with my life. When I entered the Reserve I did not know what I expected. I saw it as an opportunity to meet other places. At first, the separation of my parents was a shock, and since I was not fit, the physical training was very hard, ”says Mariela, the young reservist.

At the turn of the months, he admits that joining the Army Reserve was one of the best things that happened to him. When he finished his military preparation, he left. But now he works for them one weekend every month.

"Or when they need me, I'm there to serve them," he says.

A road to residence

It was during training to become a reservist, when talking to his classmates, he learned that by being part of the country's armed forces, he could help his undocumented parents obtain residency.

However, Mariela married an undocumented immigrant, and instead of helping her parents, she decided to apply for residence for her husband.

“The marriage did not end well. After helping him with his residence, we divorced. When I realized how easy it had been to help him, I said, what am I doing, I must help my parents, ”he says.

Mariela always knew that her parents had no papers. “I watched the marches of the immigrants of 2006 and 2011. I always saw in the news everything bad that happened. The lack of status of my parents was a constant concern. But I fell in love and did not think about anything other than helping my husband, ”she says.

When he divorced and returned to live with his parents in South Los Angeles, he sat down to talk with them to start the residency process.

"The truth is that the economic factor was something that stopped us," he says. But they decided to first ask for residence for the mother.

"I was very scared for my parents. What if Migra grabs them, and I see them again. What if something happens to me. Who will help me. They are the only thing I have ”, says she said to herself.

They then went to see the immigration lawyer Eric Price who took the case, and filed the residence petition for his mother based on the fact that she is a member of the U.S. Army Reserve.

"We arranged all the papers requested by the lawyer, and we presented the petition," he says.

Blanca Estela, 54, says she always lived in fear of deportation.

“After submitting the residency application, I received an amparo against a possible deportation lasting one year, and was about to expire when I received the residence card at the end of November,” he says.

This mother explains that although her two children over 21 years of age could apply for residence, it was not enough to obtain it because she does not have a legal entry into the country.

The fact that his daughter is a reservist changed everything.

The new permanent resident of the United States says that her greatest desire is to visit Mexico next year, and reunite with her siblings whom she has not seen for decades.

“When my daughter told me she was going to the Reserve, I never thought that would open the doors for me to the residence. I was against him joining them because he feared for his life, ”acknowledges this mother who makes a living as a seamstress.

Already with the residence, he admits that he would like to become a citizen in five years when he qualifies for said process.

With her month-old daughter in her arms, Mariela says she feels “very happy and proud” of having helped her mother obtain residency, and now she wants to support her father.

"The residence is giving them back a little of how much they have given me. I feel very happy to see that my mother is finally at peace, ”she says.

It is not enough to have citizen children

Attorney Mitzi Cárdenas from the offices of Eric Price, states that Blanca Estela obtained residency because her daughter who was born in the United States, is over 21 years old, and is a member of the Reserve.

“It is not enough that undocumented parents have a child citizen in the United States over the age of 21 to apply for residency, they need another help factor. In this case it was his daughter who is a reservist, he says.

Blanca Estela was able to get a permit called Parole in Place(PIP) In Spanish, it is known as legal entry instead.

"The Migration Law says that if you have a child in the army, in the navy or on the military reserve, you can request that permit that works as a legal entry for purposes of applying for residence," says the lawyer.

Once with him parole in place, proceed to apply for residence.

"This procedure is sometimes delayed because migration wants more evidence that the children really serve in the military," says the lawyer.

Parole in place (PIP) immigration relief is available so that certain undocumented family members of the military can obtain residence in the United States. The advantage is that family members do not have to leave the country to start the process.

In 2013, the Department of Homeland Security at the request of the Department of Defense issued a memorandum aimed at preventing the deportation of wives, parents and children on active duty through the Parole in Place so that their military relatives were not worried about their immigration status when they were on a mission.

LAPD asks protesters to report if they were mistreated by the...

The French film festival COLCOA is back in Hollywood