Home Latest News The victims of the shooting in Las Vegas will receive 800 million... 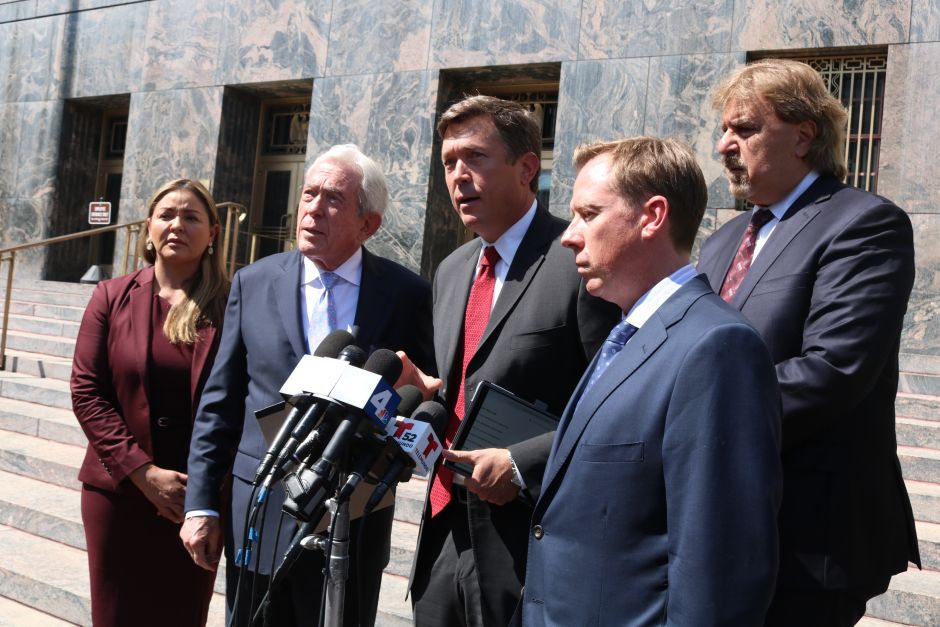 Group of lawyers representing 4,500 victims in a class action lawsuit against the MGM hotel. (Jorge Macías)

A group of lawyers representing some 4,500 victims in a class action lawsuit against the MGM hotel in Las Vegas, where two years ago the worst mass slaughter in modern US history occurred, they announced that they reached an agreement so that between 735 and 800 million dollars are paid.

During a press conference in front of the federal court in Los Angeles, attorney Mark Robinson said the amount of the agreement with MGM Resorts International was achieved after a year and a half of negotiations.

On October 1, 2017, Stephen Paddock carried out the worst shooting ever recorded after the 9/11 terrorist attacks. His meticulous plan claimed the lives of 58 people, among the crowd of 22,000 attending the open-air musical concert Route 91.

This agreement is given two days after the second anniversary of the massacre was recalled. From a window on the 32nd floor of the Mandalay Bay hotel, Paddock right and left shot. Apart from the fatalities, he injured another 869, and of these, 413 were hit by the bullets; After being discovered, he committed suicide.

The attack was not considered a domestic terrorist attack, but in the opinion of lawyer Robinson, the government and politicians in Washington will pay attention “when the powerful group of lobbyists in the insurance industry” demands that they have to shut down.

"This has to end," he said in relation to repeated shootings in the country. "The government has to do something."

Kevin Boyle of the law firm Panish Shea & Boyle LLP announced that the agreement includes three law firms representing the 4,500 direct or indirect victims of the shooting. The other firms are Robinson Calcagnie and Eglet Adams.

“There are about 70 companies involved in this case; This has been a historic arrangement, since the agreement is the first for victims of mass shootings in the United States, ”said Boyle. “None of the victims wanted to go through this, they didn't want to lose their loved ones, they didn't want to be hurt, they didn't want money. But they hope that paying this money will create some change. ”

The lawyer said that when powerful insurance companies, "which has a lot of power in Washington, realize that they are going to start paying for these mass shootings, they will force Washington to make some changes to stop them before they are repeated. "

Do you think these changes are going to happen? Asked Opinion.

"Well, unfortunately if there is something that Washington hears, it is money, and this is a lot of money that only people will pay and I think that kind of people have the power to make changes in Washington," he replied.

According to a 2017 survey, the murder or murder rate by firearm is the highest in the developed world, with 11,000 deaths as a result.

In addition, a survey by the Federal Bureau of Investigation (FBI) indicates that about 40% of Americans say they own a gun or live in a home with someone who has a

Boyle said that the approximately 4,500 victims who can participate in this agreement could be compensated by the end of 2020 when the money is distributed by an administrator appointing the federal court of Nevada.

He also stated that the firm Panish Shea & Boyle specifically represents direct families of about 20 fatalities.

Not to mention names, Boyle added that he represents a family who lost their only daughter and are devastated, 4 children who lost their only father, a person who was at the site of the massacre to celebrate their wedding anniversary, but The couple died riddled.

"Every story of death cases is devastating," he said. "People were only there on vacation."

Applause and cheer to workers for their work amid the coronavirus

Foie gras is no longer banned in California, a “symbolic victory”...

A sheriff shoots a man with a sword in a school...