Home Latest News The Salvadoran community reveals its sign on the I-10 highway of L.A. 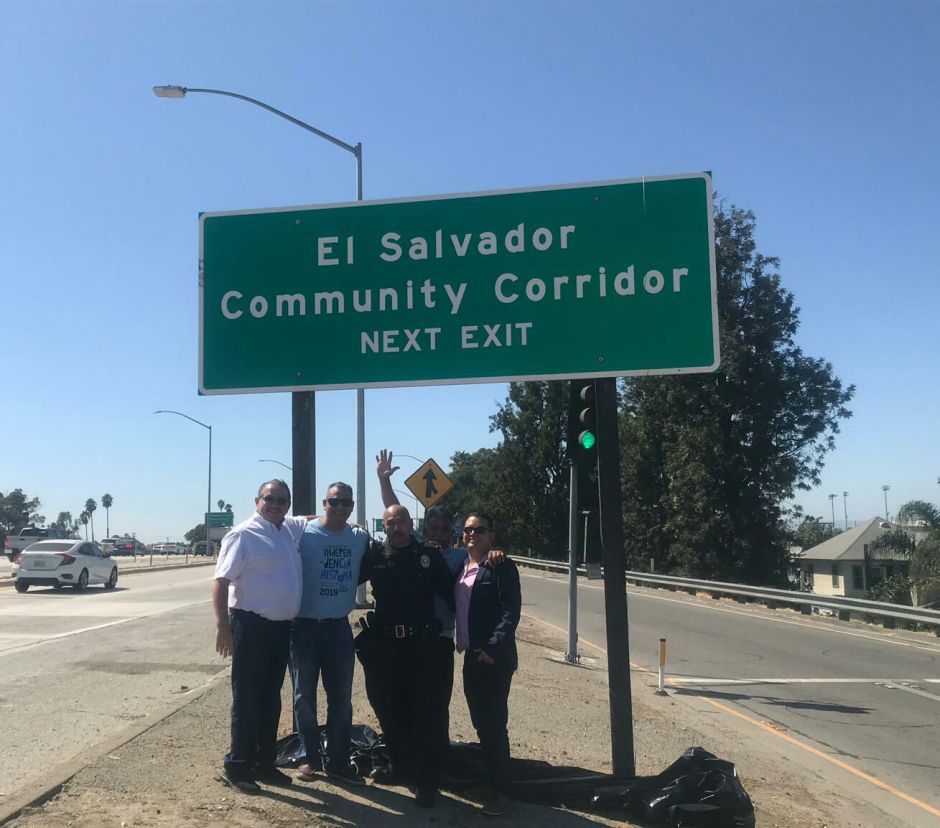 Salvadorans celebrate the new poster that indicates where the Salvadoran Corridor is located.

Thirteen years ago the idea of ​​a “was bornSalvadoran Corridor ” that brought together merchants, artists and immigrants from El Salvador, the second largest group of Latinos residing in Los Angeles.

The process was not simple and required state legislation and numerous steps to become a reality. But today, Salvadorans have their own corridor. Thanks to the support of community members who raised the funds to make it possible, the corridor now has signs at the exit of the I-10 highway announcing its presence, at the exit of Vermont.

"This signaling is historical, particularly at this time when the immigrant community of El Salvador and other Central American communities are under attack, ”he said Oscar Dominguez, founder and President of the Chamber of Commerce of the El Salvador Corridor.

"Interstate 10 is one of the busiest roads in the United States and this will give us the opportunity not only to increase visitors to our neighborhood, but also to recognize the great contributions of Salvadorans to our city."

The Salvadoran Corridor extends along the Vermont Avenue from 11th Street to West Adams Blvd in the Los Angeles Peak District, where more than 255,218 Salvadoran immigrants and their families live. The Corridor was designated the official neighborhood of Los Angeles in 2012 and currently has more than 150 restaurants, shops and street vendors in El Salvador.

In an interview with The opinion, Dominguez shared the story of this runner, from its conception, more than a decade ago, until it came true.

“The idea of ​​making a runner from which we Salvadorans can be proud was born from seeing other communities, such as Koreans and Chinese who had their own sites, such as Korea or China Town”, Said Dominguez and said that the Jewish community had been the first to install a corridor in Los Angeles, on Temple Street.

Dominguez indicated that the idea of ​​doing so in Vermont originated because there were several remittance agencies that bore the names of banks in El Salvador.

In the corridor, visitors can find Salvadoran shops, agencies and centers such as the one located in 1726 Vermont where classes, workshops and training meetings are offered. "The center of Vermont Street is an incubator, which has already helped start 55 businesses," said its founder.

The broker is based on four fundamental axes, said the president of the Chamber of Commerce.

"He First axis is the Chamber of Commerce, where we offer support, classes and training to those looking to open their own business. We also have a cultural axis, by which we offer training for artists, writing classes. Five years ago we presented the Salvadoran Film Festival, ”he said.

Dominguez also described a community axis, which brings together leaders of Salvadoran organizations and the sport shaft which recruits children of Salvadorans so they can develop through sports.

“We have to support each other as a community, as do other communities, for example, Armenians or Koreans. They help each other and support small businesses. As Salvadorans it is essential that we begin to dream big and to teach our children, our grandchildren that you can dream"He concluded.

For more information you can visit: https://www.facebook.com/esccamaracomercio/

Everything for New Year's dinner at the Mercadito del Este in...

Le Petit Paris 75, a Parisian bar in the Pigalle san...