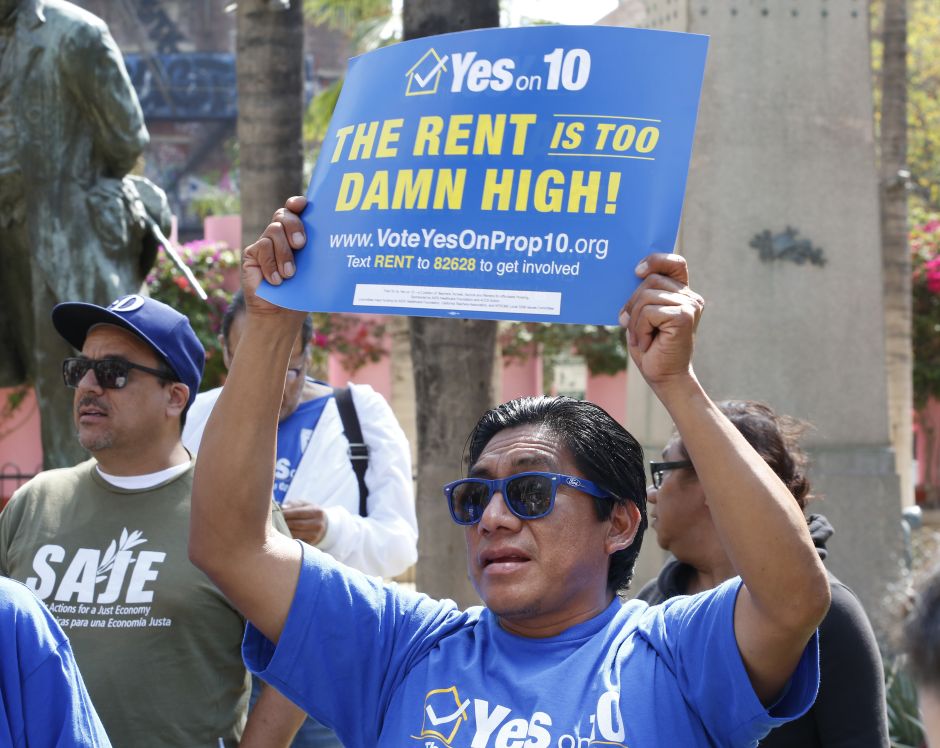 They consider that the limit set is still quite high, and does not help working families

For years tenants have protested the high increases in different communities in California. (Aurelia Ventura / The Opinion)

The California legislature sent to the desk of Governor Gavin Newsom, a bill to limit the rise in rental of housing by 5% plus the percentage increase in inflation, which could result in an increase of up to 8% to the annual income. However, the measure did not satisfy tenants' rights defenders.

“In some part it is good, but on the other hand, it allows up to 8% increase per year in income. It's too much! ”Says Trinidad Ruiz of the Los Angeles Tenant Union.

“What the state legislature should have promoted is a law that limits rent increases for ten years so that tenants can recover since in the last ten years we have had exaggerated increases of up to 50% and 100%. People do not hold more income because salaries do not increase at that rate, ”he says.

Measure AB 1482 presented by the Democratic Assemblyman of San Francisco, David Chiu, will limit the increase in housing income in California by 5% plus the rise in the rate of inflation.

Governor Newsom supports the negotiated measure with rental homeowners and apparently with groups advocating the rights of tenants. He is convinced that he will limit gentrification, evictions and homelessness.

Monse Urias, who lives with his family in Long Beach and pays for a one-bedroom apartment for $ 1,100 per month, also agrees that the increase ceiling that is contemplated in Bill AB 1482 is too much.

"A cap would have been fine for a percentage lower than 3%, but 5% plus inflation is a very high limit," he says.

Monse says that the apartment where he lives is not worth the rent of $ 1,100. "I have just been raised $ 100, and we do not change because all rentals are very expensive," he laments.

Governor Newsom said that with the Tenant Protections Act 2019 (AB 1482), California will have strong protections and tools for people who rent.

“It will serve to protect them from escalation of rent increases and eviction; and it will fight the housing crisis accessible to California, ”said the governor.

This measure was born in the framework of the state crisis of homelessness and the lack of cheap housing. Apparently it would benefit 7 million tenants. Half of the renters, about 3 million allocate more than 30% of their income to the rent.

Trinidad Ruiz of the Los Angeles Tenant Union says that the problem in the angel city is not homelessness. “There is a lot of empty housing. What happens is that the tenants have no rights and cannot pay the rents they ask for. When they are evicted or go to the street; or they leave Los Angeles or California, ”he says.

“Those who dedicate 50% of their salary in paying for housing, run the risk of getting sick; and unable to pay the rent, they can end up on the street, ”he says.

AB 1482 will prevent rental home and apartment owners from evicting tenants without giving a valid reason for the government. Currently in most of California, landlords can kick out a tenant without justification. Sometimes just because they complain or demand arrangements in their homes.

Some unions such as the International Service Employees Union (SEIU) welcomed the measure. April Verrett, president of the local 2015 considered that this legislation is crucial to protect the tenants from constant increases and obliges the tenants to provide a justified cause to ask for the eviction.

“Throughout California, people, regardless of income or race, are suffering to pay the rent. We have been forced to go to the street or sleep in our cars because the tenants of the corporations evict us without justification. No Californian should fear the loss of their roof, for failing to receive a paycheck or an emergency, ”he said.

This initiative is inspired by an Oregon state law that sets a 7% cap on rent increases plus the average inflation.

Some cities in California already have local laws to prevent income from rising beyond 4%.

Measure AB 1482 is expected to be signed by Governor Newsom in the following days or weeks.

The fight against opioids seeks to save lives among Latinos

Crossing the United States by running, the crazy bet of André...

Latino seeks a seat in the state Assembly to represent South...

French Boss, Laurence Laplanche: “In France I no longer had time...