Home Latest News The fight of America, the girl with crystal bones 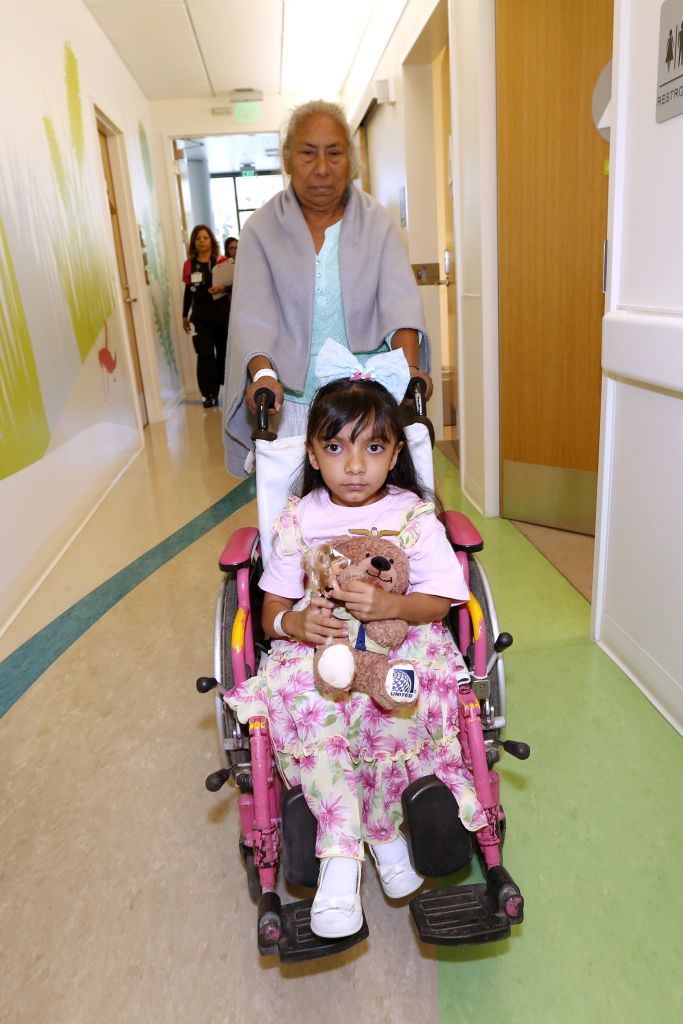 The child was born with a genetic condition that causes her bones to break easily; Grandma does her best to help her granddaughter.

It takes more than 35 hours to arrive by bus from the port of Mazatlan in Mexico to Los Angeles to bring your granddaughter América Cruz Acosta to the Shriners Children's Medical Center in Pasadena.

America is an eight year old girl who was born with Osteogenesis Imperfecta, a disorder genetic that provokes that the bones be break easily.

“One day after she was born, we bathed her and noticed something strange in her hip. The girl cried a lot. We took her to a clinic. They got together like four or six doctors. They told us that he had osteogenesis imperfecta, ”recalls the grandmother of the child for whom the news of the disease meant a great pain.

The girl was newborn and already had broken feet. "They had to plaster it."

A doctor in Mazatlan predicted that it would not last three months.

But the grandmother did not settle or give up. “God has the last will,” he recalls that he said thunderous; and he set out to fight for the life of his son's only daughter, who is deaf and dumb.

“The girl's mother is also deaf and mute, but she left. We don't know anything about her, ”he explains.

So Mama Sol took care of the newborn as if she were her own daughter.

Four years later, he learned that in Los Angeles there was a children's hospital that could help America.

“A friend had a known person with the same disease and whom she was helping at the Shriners Hospital in Pasadena. I found out that I had to go to the Children's Hospital in Hermosillo – the capital of the state of Sonora. There they did a video interview and agreed to attend America, ”he adds.

In 2015, when the child had already had at least ten bone fractures, an average of three a year, she arrived at the Shriners Children's Medical Center.

Pediatrician Manu Raam, who has been taking care of the child for four years, says that, from the treatments, the frequency of bone fractures and the level of pain have greatly decreased.

“When the girl first arrived, she had a lot of pain. I couldn't sit without support, ”he explains.

With treatments, America has grown tall and can walk with a walker. It no longer just depends on your wheelchair, says the doctor.

Dr. Raam explains that osteogenesis imperfecta affects one in 10,000 people.

"It is caused by a genetic mutation that causes bones to be very weak, like glass, and they break easily causing a lot of pain," he explains.

Although there is no cure, exist treatments that decrease he level of pain and frequency of the fractures.

“Some children take them for several years, and then they don't need them anymore. Some more serious cases occupy lifelong treatment. There are slightly affected children and they have no pain. They are only under observation. Others are affected more severely. America is in the middle level, ”he says.

What is sought with treatment is that they have a good quality of life. However, when they turn 30 to 40 years old, the doctor says they have noticed a hearing loss and problems with the heart valve.

"The most important thing is that America has responded very well to the treatments given every four months, and can live many years," he says.

And he comments that it is normal that in Mexico he has been given a three-month life diagnosis. "There is not much knowledge there about the disease and access to the medicine does not have it"

Shriners Hospital does not charge Mom Sol a dollar for medical care in America. He got a charitable person to let them stay at home in the neighborhood of El Sereno in Los Angeles during the days he comes to medical treatment.

“The hardest thing is to raise money to pay for the trip from Mazatlan to Los Angeles. Together plastic containers, I make breakfasts, kermeses, collections with a boat. I don't sit here because I want America to get ahead, ”says the grandmother.

His son, the father of America, is the one who supports them on a day-to-day basis with his work in a tortilleria where he barely earns the minimum wage -102 pesos per day-, just over five dollars. "Because they are deaf and dumb, they don't give them a job anywhere," says the grandmother, who shares that her house has no floor and the area of ​​Mazatlan where they live is very much in need.

America is a very polite and sweet girl. When the doctor examines her and asks her to open her mouth to check her tongue and tonsils, she refuses for a while. He is sad that the doctor realizes that a tooth is about to fall out.

Mama Sol says she would like to get a psychologist for the girl, but they don't have the financial means. He worries to see that the minor is very distressed to have a stature smaller than that of his companions or because he cannot run and play like them. “I don't want to be crystal, he tells me often, and I don't know what to do. Only he needs therapy to learn to deal with those feelings. ”

America is in the third year of primary school. Outside of her genetic condition, she is a normal girl without health problems.

"He's very smart," says the proud grandmother. “I watch your diet a lot. I don't give him any flour or candy. It doesn't hit a flu, but it's because I take care of it. ”

But sometimes, the 66-year-old grandmother feels that the forces run out.

"Sometimes I would like a double so that it doesn't depend so much on me," she says. From Monday to Friday, Mama Sol has to wait outside the classroom in America because there is no one to take the child to the bathroom. "The children run out to let me know, Mama Sol, Mama Sol. America wants to go to the bathroom."

Despite all the sacrifices involved in caring for her granddaughter whom she considers her daughter, she says that this girl gives her tremendous strength to get up daily and fight for her well-being.

For America, there is no other mother than Mama Sol, whom she calls, Mama, she says proudly.

To help America and her grandmother

Participate in the fundraising campaign on the GofoundMe.com page and look for: American flights to heal your bones.

According to Trump, American wine is better than French wine. Is...

The coronavirus in Los Angeles is already around 10,500 cases