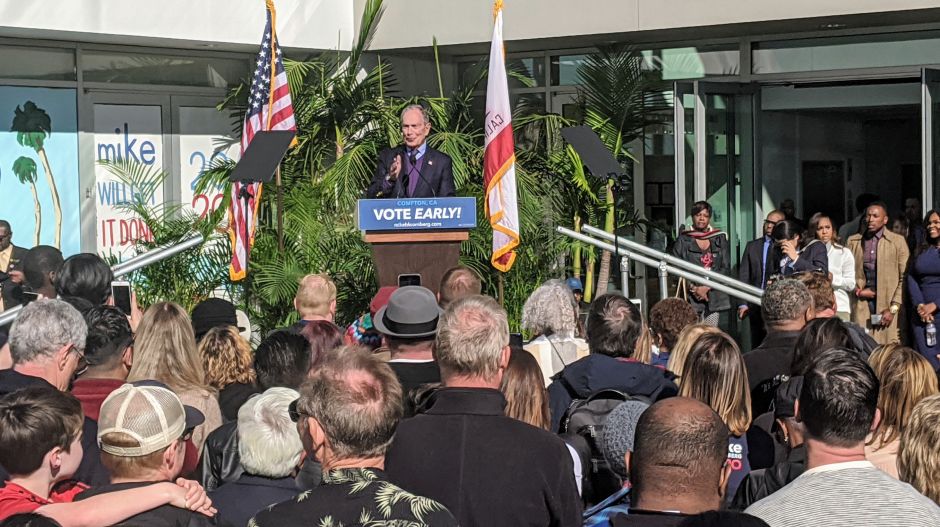 The candidate for the presidency of the United States bets on his experience; ensures that immigrants deserve immigration reform on the way to citizenship.

While the Democratic candidates for the presidency of the United States closely followed the results of the Iowa caucus, whose elections were on February 3, candidate Mike Bloomberg chose to do something different.

He went to bet on the Californian vote. Since Sunday, the former mayor of New York has reached the golden state to advocate for early voting and motivate voters to go to the polls on March 3.

Bloomberg, 77, was in East Los Angeles on Sunday where he was backed by former Los Angeles Mayor Antonio Villarraigosa.

On Monday he began his campaign in Sacramento where he began a survey with supporters and organizers. He then turned to Fresno for an early voting event with “Ganamos con Mike”, a coalition of Latinos that supports the New York candidate and addresses critical issues in the 2020 elections.

He finally finished his tour in Compton, where he attended an event where Mayor Aja Brown and three city councilors, Michelle Chambers, Emma Sharif, and Tana McCoy, backed him publicly. There he began his tour on the “Get it Done Express” bus, which will take campaign supporters to events across the country, while sharing why they believe Bloomberg is the best candidate to defeat President Trump in the November elections. .

In an interview with La Opinion, Bloomberg said it is important to include immigrants without documents on issues ranging from health to immigration.

"We can't let people in our country, whether they're documented or not, can't see a doctor," Bloomberg said.

“One has to provide medical attention to everyone. We have to find ways to pay it, ”Bloomberg said. "Medicare for all does not work because 155 million Americans want the medical care provided by their employers that is better than what Medicare offers."

The presidential candidate said that if these private insurers did not exist, the federal government could not pay Medicare for everyone because the rates that Medicare pays are very low compared to what private insurers pay, which are the ones that keep hospitals running.

The undocumented deserve a path to citizenship

Regarding the immigration issue, Bloomberg highlighted how important the immigrant workforce is in the United States.

“You can't deport 11 million people. Our economy could not stand it, ”said Bloomberg. "What you do is simply give citizens a way."

Bloomberg agreed as several of his Democratic opponents that people without documents who have been in the country for several years have assimilated in all forms except in the legal form.

"Then we have to solve that problem and you do it by giving everyone a path to citizenship, and it is not unreasonable, but they know they have to learn the laws … They have to study all that to become citizens," the billionaire candidate acknowledged.

As for the Dreamers, Bloomberg said he can't imagine losing all the accumulated talent of these young people, many of them professionals, who came to the United States as children.

Without fear of being late to the race

Although the former mayor of New York is far behind in the Iowa elections, he said he feels very optimistic in reaching the presidency as his experience has shown.

“Number one, I ran the largest and most populous city in the world in the country (New York 2001-2013). When I left, I was quite popular, I think, very popular in a better way to express it. What I did was understand people and provide services. ”

Without much effort, Bloomberg is almost guaranteed a place for the next Democratic debate on February 19 in Nevada.

However, the controversy of Bloomberg's candidacy increased on Friday after the National Democratic Committee announced that it would abandon the grassroots funding requirement where candidates had to prove their popularity by collecting thousands of small donations.

Now the rule is that to qualify for the February 19 debate, candidates must register at least 10% support in four national surveys in the states of Nevada or South Carolina, or 12% in a pair of qualified surveys of The two states.

They can also qualify if they won delegates on Monday at the Iowa primary or on February 11 in New Hampshire.

Bloomberg has managed to launch his successful campaign on television, cable and digital media with money from his own pocket mainly.

"Alarming increase" in deaths from traffic accidents on the streets of...

What should dreamers do to avoid exposure to Migration?

A plate of food to open the conversation in the middle...

Advice from French chefs in America for pancakes like at home