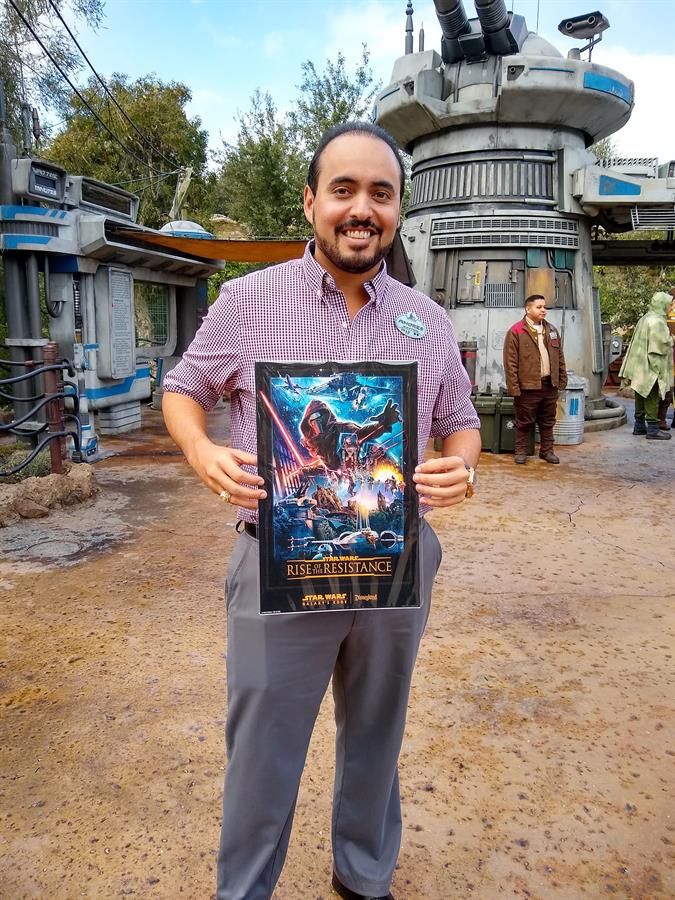 LOS ANGELES.- The work of five years how bio-medical engineer in the POT it was one of the keys that opened the doors to Andrés Ovalles to be part of the team that developed the attraction Disneyland Star Wars-Rise of the Resistance, what opens to the public in California this Friday.

For this creative who was born in Step, Texas, and grew up in Mexico, "the being Latino and speaking two languages ​​has always been an advantage“, As he told in an interview with Efe.

"Thank God in any of the three places where I have worked I have felt that my origin has been a disadvantage," said the Disney Project Manager, who worked "more than five and a half years" in the design and construction of the attraction in both California and Florida.

On the contrary, for this son of mexican – “My dad (is) from Sinaloa and my mom's Chihuahua“- his Latin root has allowed him to combine engineering discipline with the creativity necessary in projects like the one just finished.

Graduate of the University of Texas A&M, his work for five years in the American aerospace agency and his three-year term “in a company that designed hospitals in all the U.S"They gave him enough vision and experience to achieve his dream as a child:"Work at Disney".

“I grew up coming with my grandmother to this park,” says Ovalles at the entrance of Rise of the Resistance, which did not exist when he was little.

"And now to know that I have been able to work and be part of this extraordinary group of imaginative (creative) who have developed this iconic attraction, it excites me and fills me with pride", Add.

Therefore, when asked about what to say to young Latinos who are finishing high school and thinking about a professional career, they do not hesitate to answer.

“I tell you there are no limits. Sometimes it's hard and there are stereotypes that we let them affect us personally, but I invite you to believe and think that there really is no limit, that what you want you can achieve, ”he says.

Remembering that to fulfill his dream as a child, he not only had to obtain a professional degree from a prestigious university but also worked with dedication for eight years, Ovalles is proud to be part of Walt Disney Imagineering, the creative branch of the company.

"It was essential for us to design it once and build it twice," he explains, referring to the parallel construction that was developed in Florida – inaugurated in December – and in California.

For Rise of the Resistance, one of the main challenges of the creatives was that visitors "participate in the adventure" of Star wars instead of seeing her as spectators.

Thus, the new attraction "captivates" them not only for their technology and its design but because those who enter it are captured by First Order guards (First Order).

When trying to escape, the public undertakes a frantic escape under a shooting rain of the dangerous white armor guards Stormtroopers (assault troops), and other deadly challenges.

“The experts in the Star Wars they will appreciate the fidelity of every detail with which the attraction has been designed and created, ”says Ovalles, explaining that there were artists who dedicated themselves to polishing every final detail.

On the other hand, for the neophytes in the subject there is no doubt that Rise of the Resistance will be a hook that will attract them to the famous story originally created by George Lucas.

For each other, this new attraction of California is one more step forward in the amazing development of creative Disney what Bob Chapek, President of Disney Parks, described as "the most advanced and action-packed attraction that Disney has created. ”

"People who have been here for more than 20 years tell me that every time a new project comes out it is a creativity challenge and they are amazed to see how they have made it possible," Ovalle noted.

Therefore, for this Latin engineer and creative, the future is continue with your dream, creating stories like the ones he shared with his grandmother and "offering that same opportunity to many other children to share unforgettable stories, with their grandparents or with their parents." EFE News

The Mega Clinic arrives in Los Angeles to cure

Band of El Salvador will participate in the Parade of Roses...

California will eliminate contracts of private detention centers for immigrants