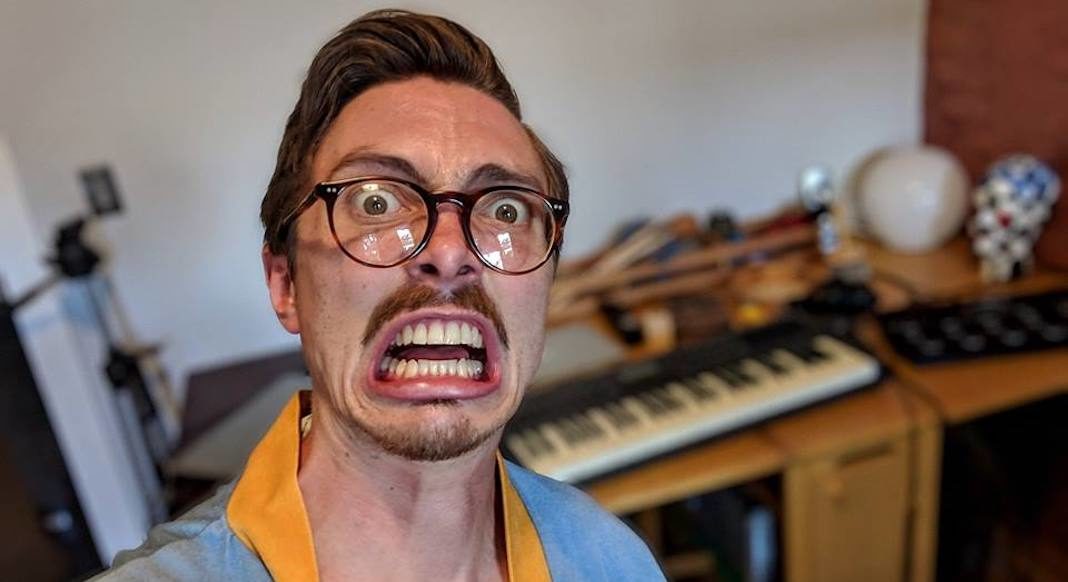 "The craziest mix between musical creation, improvisation and comedy". This sentence posted by a fan on the Facebook page of Marc Rebillet perfectly summarizes the immense talent of the man.

Born from a French father and an American mother, Marc Rebillet made a name for himself on YouTube in 2017, posting videos of him dressed lightly composing music using his keyboard, his computer, a microphone and a loop station. Quickly, his videos explode because the artist knows how to do everything: he composes brilliantly, sings, dances and laughs.

Two years later, Marc Rebillet fills the halls wherever he goes thanks to a kind of one-man show in which he improvises music with the help of the public. He finished in October a tour of more than 20 dates in the United States and Canada, and is currently touring Europe where he played two times in Paris on 19 and 20 November. "What I realize today is the product of years of work trying to make music," says the 31-year-old artist. "It is also the product of many thoughts, dreams, and frustrations to imagine how I could make my job one day. "

The Franco-American grew up in Dallas and spent many of his summers in Paris, where his aunt and cousin still reside. He started in the workforce as a waiter, then as a bank employee and tele-operator. A last job he was fired at the end of 2016. "They gave me two months of salary, it allowed me to take stock of my life and think about what I wanted to do." In early 2017, Marc Rebillet knocks on the door of bars in Dallas where he proposes to play his singular music. Seven months later, it is scheduled in five establishments per week. "It was a big bet because what I do is not for everyone", remembers Marc Rebillet who explains "Having taken advantage of all his scenes to learn, progress and refine my world".

Nicknamed "Loop Daddy" by his fans for his mastery of musical loops, Marc Rebillet has been playing the piano since the age of four. He studied at the conservatory in New York, before trying a film school to become an actor. "I also had the chance to grow up listening to all the musical styles thanks to my parents: from the classic to the electro while passing by the rap, the soul and the jazz", says the artist.

The other reason for the success of Marc Rebillet lies in the madness of his character. With each video, in each concert, the artist gesticulates in all directions, shrieks, as if possessed by his music. "What you see on stage is my fears, my desires and my sense of humor pushed to the limit," explains the Franco-American. "It takes a lot of energy, I can not do that all my life. "

On tour in Europe until December 4, Marc Rebillet is working in parallel to the release of a third album for 2020. He is also thinking about his reconversion. "I'm on a big project TV show that I can not say anything yet. If I want to last, I have to make a career in entertainment more than in music ".

Elodie Vidal: “I would like to put art back at the heart of our societies”

LAPD and Target come together to bring a little joy to...

Hispanic children: with more education than in 2017, but with math...