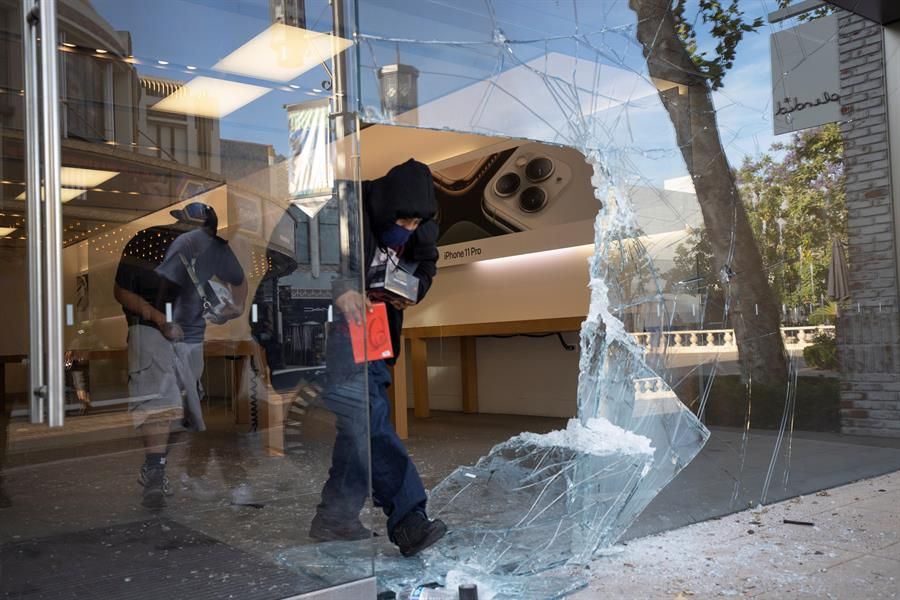 Looting at an Apple store in West Los Angeles.

Rodeo Drive, considered the most exclusive shopping street in the United States, could not be saved from looting on the chaotic Saturday afternoon and night.

But eventually the violence appeared, as had already happened at The Grove Mall and other businesses in the Fairfax area, when Police attempted to disperse protesters.

Either smoke or tear gas now being used to disperse crowd here at Rodeo Drive in Beverly Hills. It's working. @FOXLA pic.twitter.com/33BZOBKVnb

The Alexander McQueen boutique was looted. A camera captured the moment in which individuals are admitted to the exclusive clothing and accessories store.

#BREAKING: Protesters have been able to gain entry to the #AlexanderMcQueen store on #RodeoDrive in #BeverlyHills. Our camera captured the crowd quickly clearing the store of their merchandise. Live coverage on @CBSLA with @ChrisVHolmstrom and @SaraDonchey. #GeorgeFloydProtests pic.twitter.com/xg08ab5IAe

A group of looters attempted to vandalize the Gucci store, but after removing the protection boards that had been placed outside, the attackers were unable to break the windows to enter the premises.

GUCCI STORE ON RODEO DRIVE BEING LOOTED AND DESTROYED pic.twitter.com/D9ls5Y0fSb

Eventually, the Beverly Hills Police managed to control the situation, but the stores on Melrose Avenue did not suffer the same fate.

These vandals are destroying my neighborhood!
This is happening on Melrose and Fuller. #LosAngelesProtest #Melrose pic.twitter.com/SRT8fefK4r

Video: People seen running in and out of store in 8000 block of Melrose Avenue. https://t.co/01gIkl9vHc pic.twitter.com/0oFdhJrSSk

A building above Melrose in which an adjacent Starbucks café could be seen was burned down. Firefighters were struggling to put out the fire, which caused a dense column of black smoke.

Looters from the #GeorgeFloyd protest are burning down stores on #Melrose Ave in LA: pic.twitter.com/fK2JZ0ZZ98

Images from local television news shows showed that officers managed to detain dozens and dozens of suspects, whom they kept on the ground or against walls before processing their arrests.

In the United States, the puzzle of hierarchical relations at work

Latinos were kicked out of their homes in Hesperia

Volunteers inform and empower the community to participate in the Census