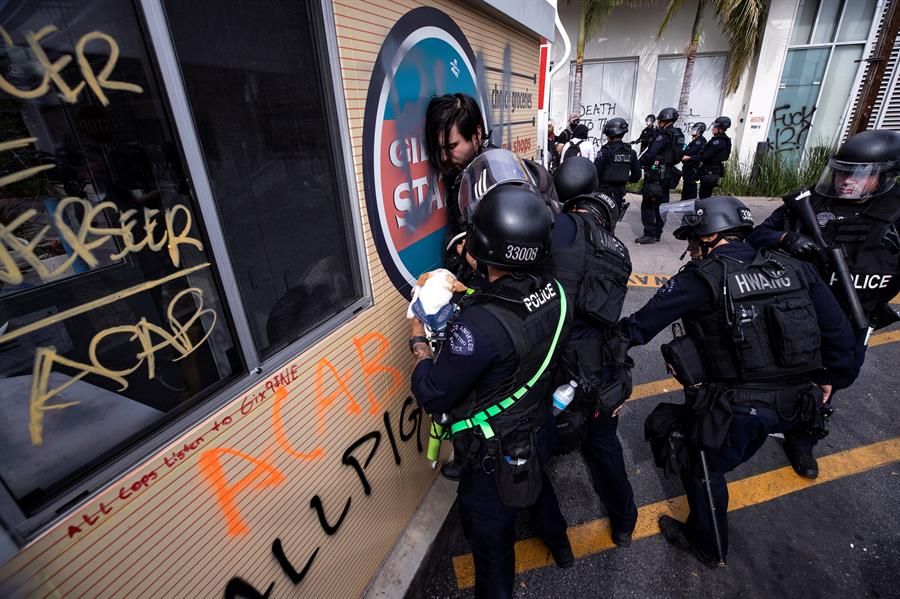 The arrest of a protester in West Los Angeles.

Protesters who participated in a protest in Los Angeles on Saturday against police abuse and racism over the death of George Floyd in Minneapolis, tweeted that the demonstration was taking place peacefully, as it had been organized, until Los Angeles Police officers began to clamp down on protesters, using batons and beating them.

Los Angeles authorities say violence in the protests is taking place because people who want to create these confrontations, create riots and promote looting are involved.

Here is a series of tweets that became highly visible and show how the demonstration happened, before the riots and the intervention of police officers began:

Shutdown Los Angeles from The Grove to the Beverly Center peacefully 👏🏽🙌🏽 pic.twitter.com/p7kACqpZaw

In Los Angeles today. This is absolutely beautiful. The heritage of my people coming through for our Black brothers and sisters. BLACK LIVES MATTER! pic.twitter.com/ovXaNDeL9z

This is dope there are sooooooo many people protesting now in Beverly Hills look at this view from our Penthouse office! pic.twitter.com/d7AmKQN5py

LOS ANGELES: This m … is real. They just drove around my neighborhood, I saw the last one just 5 minutes ago. If you're at the LA protest go now as soon as you can. ”

LOS ANGELES: This shit is real. They just drove through my neighborhood, saw the last one as recently as 5 minutes ago https://t.co/KGPffKfdXH

And the videos posted on Twitter by people who say they participated in the demonstration and accuse the police of inciting violence:

If you are #protesting in #The Angels BE SAFE. #LosAngelesProtest #protests #BlackLivesMatter #THE #LApolice #dtla #police #PoliceBrutality @KTLA pic.twitter.com/mdcidwWLBD

The LAPD beating protesters with batons and shooting rubber bullets directly into the crowd. It's BAD in Los Angeles. You can see the girl with the black top get injured… This started as a #BlackLivesMatter peaceful protest. UNREAL. #LosAngelesRiots #GeorgeFloyd pic.twitter.com/iAbwUGNQFW

In the next tweet even appears a photo of a person setting a LAPD car on fire, and from a protester who wrote: "He started the car, not us."

Check this out. Rubber bullet fired by #LAPD gashes by camera instead of my face during #GeorgeFloydprotest in the. pic.twitter.com/aTh46j2DZa

Many users said that the demonstration was taking place peacefully.

LAPD has started tear gassing, shooting rubber bullets, & beating protestors as they held their hands up & yelled the names of victims. LAPD started the violence. THE POLICE STARTED THE VIOLENCE IN LOS ANGELES. #LosAngelesProtest pic.twitter.com/pWgTbty1RZ

The curfew has been expanded to the entire city to keep Angelenos safe. People in the city of Los Angeles must stay indoors tonight, starting at 8 p.m. until 5:30 a.m. Sunday morning.

The curfew has been expanded to the entire city to keep Angelenos safe. People in the City of Los Angeles are required to stay indoors tonight, starting at 8 p.m. until 5:30 a.m. on Sunday morning.

Accused of murder of mother of 2-year-old girl who died after...