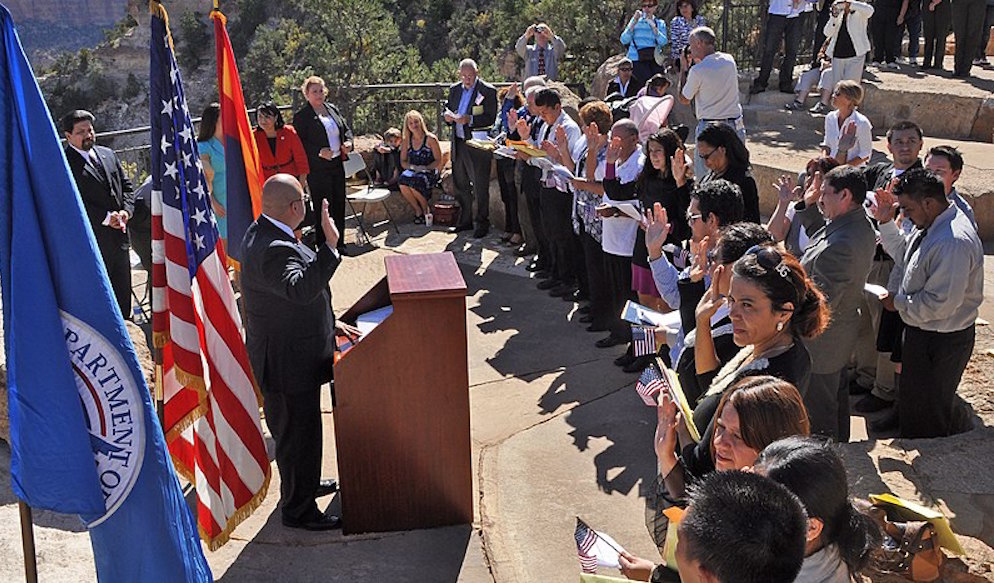 The Trump administration gave a small year-end giveaway to applicants for US citizenship. Those who submit their application from December 1 inclusive will have to take an extended naturalization test. The announcement, made on November 13 by USCIS (US Citizenship and Immigration Services), the agency responsible for immigration, sparked an outcry.

Administered to any individual who wishes to acquire American nationality, the new test will include 20 questions asked orally by an agent, against 10 in the previous version (which dates from 2008). As before, the candidate will have to answer 60% of the questions correctly, or twelve in total (against six for the previous version). These questions relate to the history of the United States, the country’s institutions, its symbols and values.

Another change: the list of questions and answers to be studied for the test has been extended. It drops to 128 against 100 for the 2008 version. These changes are part of the ten-year review initiated by USCIS for “ensure that the test remains a tool that comprehensively assesses the applicant’s knowledge of American history, government and civic values“. The new test was submitted for review to several organizations and volunteers across the country in the summer of 2020, the agency said in a statement.

The linguistic part of the test does not change: applicants who are not exempted from it because of their age or the length of their presence on American soil will have to undergo oral, written and reading tests intended for assess their level of English.

Several immigrant defense associations have criticized this new test, accused of making the naturalization process more complicated, and call on the future Biden administration to reverse it. They also fear that it will take longer to administer in a context where USCIS is already facing numerous delays due to the Covid and the large volume of suitors. Indeed, in the new version, the agents are required to read the twenty questions, even if the candidates gave the sufficient number of correct answers. Previously, they stopped as soon as a candidate had reached the threshold of six correct answers.

In addition, the Washington post noted that some of the new issues are more technical and political. While both tests ask “who represents the United States senator?“, The 2008 response -“all people of the state“- was replaced in 2020 by“state citizens“. A nuance that seems to reflect the Trump administration’s desire to exclude illegal immigrants from national representation, the newspaper analyzes.

Laurent Vonderweidt, French immigration lawyer in California and Paris, puts the new selection criteria into perspective. “Compared to what we ask people who want to become French, the test remains very accessible! ”, he emphasizes. The advice he gives to his clients is the same as before: “It’s like a driver’s license. Take it seriously, sit down to study the answers well in advance. It was true yesterday, it is true today. Few people know how many stars there are on the American flag for example“.

The new test came into effect two months after a federal judge in California suspended USCIS ‘decision to increase naturalization fees by 81%. These costs would have increased from 640 to 1,160 dollars.

Bac 2021, high school reform and consequences of the health crisis:...