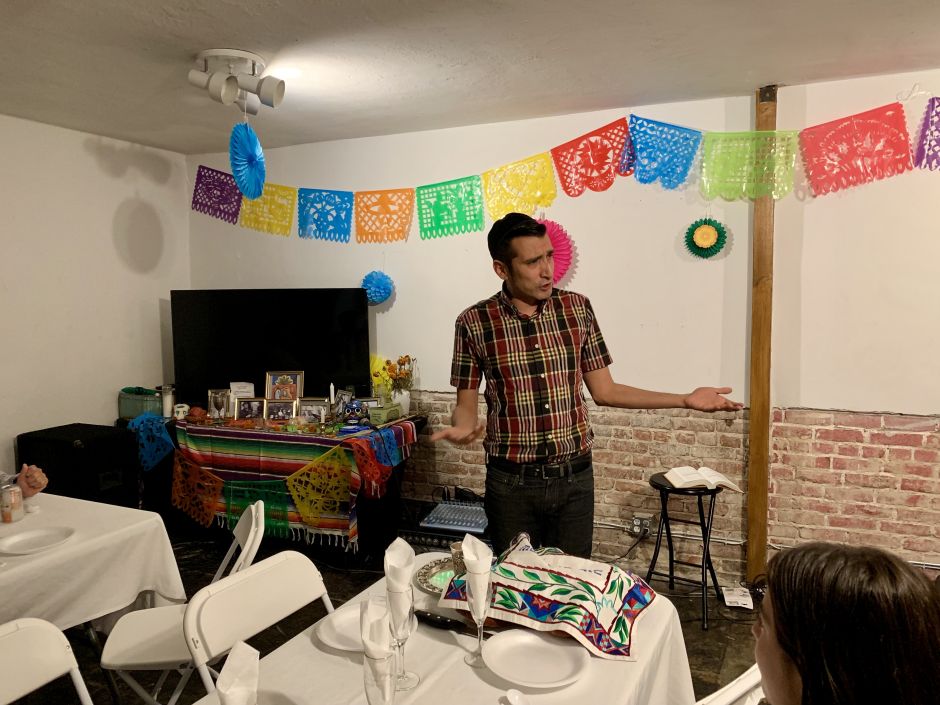 In the Boyle Heights neighborhood, a Mexican-American Jewish leader organizes them twice a month

Tradition tells that the first thing that many Jews ask you when they know you, is if you are hungry and if you are single or single.

If you answer that you are hungry, they offer you food; and if you do not have a partner, they try to find your better half because there is a belief that if they help form partners, they ensure the highest step in the sky.

Jewish-Mexican-American historian and spiritual leader, Shmuel Gonzales tries to accomplish at least the first, and at least two Fridays a month, opens the doors of the community center he directs and founded to feed community members at a Shabbat dinner Free full of Jewish Mexican food.

In the heart of the historic Boyle Heights neighborhood in Los Angeles, in the community space of the Boyle Heights History Tours organization, adorned with confetti and an altar dedicated to honor the dead, Shmuel served Shabbat dinner, which they attended Several friends of the community, not necessarily Jews.

"I do it because we need to make allies with other cultures. ”, explains Schmuel, a descendant of Jewish Mexicans, and who converted to Judaism.

Shabbat is the most important day for the Jewish tradition. Start Friday night with a family dinner, to which friends or people from the community are invited to spend a family evening around food.

“Anyone can enter. Every month, I offer this dinner once or twice. In Boyle Heights, we have a very small community of Jews, we are the children and grandchildren of the elderly. That is why we want to create community in the same place where our ancestors arrived, ”he says.

Schmuel has been preceded by six generations of Jewish Mexicans in Boyle Heights. “They arrived in 1896. In the first part of the 20th century, 75% of the neighbors in this neighborhood were Jews. In that century, the Jews were immigrants, ”he says.

The Jewish community in Boyle Heights was made up of working families that mostly came from Eastern Europe.

Shabbat Dinner is an opportunity to share culture, food and to pass on community stories, notes Shmuel, who founded the Center for Historical Studies in Boyle Heights where in addition to organizing Shabbat dinners and other Jewish celebrations, he conducts tours around the neighborhood, and comedy events.

“I am the leader of the Jewish community in Boyle Heights. Among the Jews, there are Latinos, African Americans, of all kinds of cultures. Many do not have the time to live as Jews, but it is time that many people leave the closet to say that their roots are Jewish and what, ”he says.

And he considers that it is very important for people who have both roots, the Jewish and the Latin as he share the culture. “It's not uncommon to be a Jewish Mexican. We have the same cultures, just a little different, ”he says.

Schmuel began the Shabbat dinner with blessings in Hebrew before breaking the bread and passing it to his guests.

“Shabbat is the end of the week; After working very hard, the Bible says we need a rest day. That's why on Friday afternoon we share and break bread, ”he explains.

Shmuel's very mexican Shabbat dinner is part of a group of dinners organized by angelic Jews supported by OneTable, a national non-profit organization that supports people between the ages of 21 and 39 to have an authentic and valuable Shabbat dinner.

Analucía Lopezrevoredo, director of West Coast programs at OneTable, explains that this type of dinner has been organized in Los Angeles since 2017, and is focused on the Jewish millennia.

“Shabbat is a community party to get together, meet people and not be alone,” he says.

“OneTable teaches coaching to those who want to host these dinners. It offers them a library of Jewish resources, and a credit to lower the price per person for dinner, ”he explains.

Some of Shabbat dinners are free for attendees such as Shmuel's, but others have a cost.

Shabbat dinners are organized throughout the country in about 17 cities.

“We want to change the narrative and show the joy of Jewish traditions,” says AnaLucía.

In Los Angeles, 7% of all Jews identify themselves as Latinos, but Shabbat dinners are open to everyone regardless of race and religion. According to a 2019 report by the American Jewish Population Project in the United States, there are about 227,000 adult Latinos who identify Jewish religion as their religion.

Edith de la Torre, a Mexican non-Jewish immigrant who grew up in Boyle Heights, does not miss the Shabbat dinners organized by Schmuel.

“Without looking for it on the Internet, I got information that said‘ where the Shabbat could be celebrated ’. It came that in Boyle Heights there was a historian who held Shabbat dinners. When I came the first time I loved the atmosphere and all because we are like a family, ”he says. Since then, Edith does not miss any dinner.

He admits that he has been fascinated with Jewish culture. “I like Jews because they are very persistent. They don't stop until they get what they want, but they are also very relaxed and easygoing, ”he says.

According to Los Angeles Conservancy, about 40% of the population of Boyle Heights was Jewish until 1920 and 1930. Then the neighborhood was filled with Mexican immigrants.

Martin Olivera of Boyle Heights Neighborhood Music School, of Mexican grandparents, a Catholic servant but who appreciates the values ​​of the Jewish community for defending the rights of immigrants, enlivened Shabbat dinner with his violin, playing and singing traditional music of the Jews of Eastern Europe.

OneTable has an application where you can check all the places where there are Shabbat dinners in Los Angeles.

Campaign launched to include immigrants in recovery for COVID-19

Good Living in New York: the first salon to answer all...

[Webinaire] Covid-19 and real estate: what assessment on the sale and...

A plate of food to open the conversation in the middle...