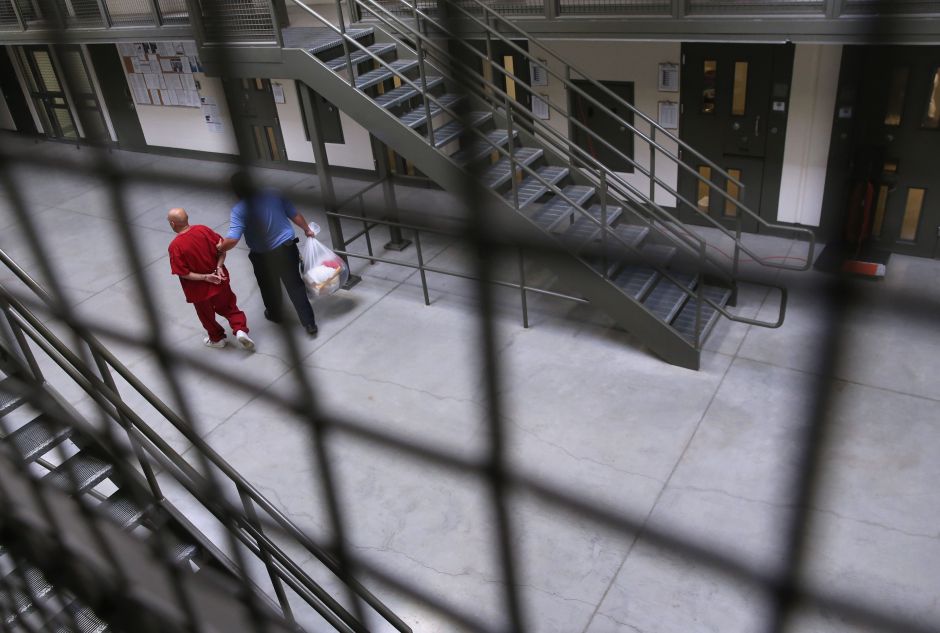 At least ten immigrants in custody at the Adelanto Detention Center have gone on hunger strike, protesting against the lack of protections to prevent them from acquiring the coronavirus.

"Most of us are afraid of being infected and never seeing their families again.. We want to be released. The guards do not wear masks or gloves, ”said Francisco Zúñiga, 27, a Chilean immigrant who has not eaten for five days.

“The risk is higher for colleagues who suffer from chronic diseases such as diabetes. And if we catch it, we are going to spend much more time locked up, "he said.

Francisco has been deprived of his freedom for two months, after being detained at the southern border, when he tried to re-enter the country after leaving for Mexico to see his family.

"There are people of all nationalities here: Latinos, Russians, Africans, Hindus and other Asians who have been detained for months and years, but who do not dare to protest against the threats to charge us, or send us 'to the hole', as they they call the cell of confinement ”.

He explained that the conditions to prevent the spread of the virus are dire in Adelanto. "There is no social distance. We are all together. They do not bring gel to disinfect hands or there are masks; food is poor and there is a lot of garbage. You believe that if someone gets a coronavirus, they are going to bring him a ventilator so that he can breathe, ”he questioned.

His despair has been such that Francisco signed his voluntary departure to return to Chile, but watch the time go by without being informed when he is going to leave.

"Here I am awaiting my deportation with fear of getting sick from coronavirus."

Desperation in the distance

From Chile, Zhenia Ocares spoke with The opinion about the case of his partner, Marcelo Guzmán, 46, who has been fasting for ten days.

"It is maddening. I am alone with my six year old son and one year old daughter. Marcelo started the United States out of fear, after the social outbreak of October 2019 in Chile, where many people died when they went out to protest during the curfew. He left with the clothes he was wearing and without money, "he said.

But when he arrived in the United States, Zhenia said that Marcelo found something worse when asking for political asylum.

“During this time he has gone on hunger strike, they have never approached him to find out his state of health. They do not have security measures to avoid contagion of the coronavirus. They don't even maintain hygiene and they give them soap. ”

He says that after the credible fear interview, he was released on bail to release him for $ 25,000. "It is impossible to pay them. The family that we have in the United States was helping him with the payment for the lawyer, but with the epidemic they lost their jobs, and they can no longer pay for legal services. ”

She does not have the means to help her husband. "I have chronic hypertension. Because of the quarantine, I can't leave the house. I am jobless. The time that Marcelo has been detained has caused us a lot of economic and psychological damage ”.

Her six-year-old son cries for his father every day, and this mother no longer knows what explanation to give him. "He did not commit any crime. He only crossed the border. Why keep him in jail for so long. Marcelo is a very determined and optimistic man, but lately because of the video call I have seen him very emaciated and frustrated ”.

Of the five months he has been detained, four have quarantined him for an outbreak of chickenpox in Adelanto.

“It is very cruel what they do to asylum seekers, especially now that we have a global health crisis and when priority must be given to bringing families together. Then they neither send them to their countries nor give them their freedom, "said Zhenia.

Those who participate in the hunger strike are, in addition to the Chileans Marcelo Guzmán and Francisco Züñiga; from Nicaragua, Freddy Bojórquez and José Bismarck; from Mexico, Jairo Giovani Parra; from Sri Lanka, Dineshkanth Jeevan Dhara and Vasidharan Chandhirasiri; and from Ukraine, the brothers Zhyhalin and Rybin Volodymyr.

José Marroquín, who left Adelanto on April 2 after almost two months in detention, said that if the virus reaches the immigration center, it will come from outside.

"It will be carried by staff or newly arrived detainees. In the morning they catch an immigrant; and for the afternoon they already put it in the blocks where everyone is ”.

Alexx R. Pons, a spokesman for the Immigration and Customs Enforcement (ICE), said they have reports that there has only been one detainee on a hunger strike in Adelanto since April 11.

"A detainee is considered to be fasting after 72 hours without trying food, and is referred to the health authorities for evaluation and treatment," he said.

He added that ICE does not retaliate against hunger strikers.

At the moment, he assured that no positive case of coronavirus has been reported among detainees or staff.

For the good of all

Juan José Gutiérrez, coordinator of the Coalition of Full Rights for Immigrants, said that out of respect for the human rights of detainees in migration centers and in the face of the pandemic, those who are not dangerous criminals should be given immediate freedom, and whose only crime is not having papers or requesting asylum.

"It is a health obligation to ensure that these centers for immigrants do not become places of contamination of the virus, Which would put the entire population in danger, as has already been seen with the deportees who have sent Mexico and Guatemala and are infecting people on their return. ”

He emphasized that keeping immigrants in detention puts their health and that of everything at risk. "They have to be released and given medical access."

"We make the French dance far from home" –

Innocent man spent 20 years in jail: they finally condemn the...

[Webinaire] Investing in real estate in 2021: which strategy to adopt...