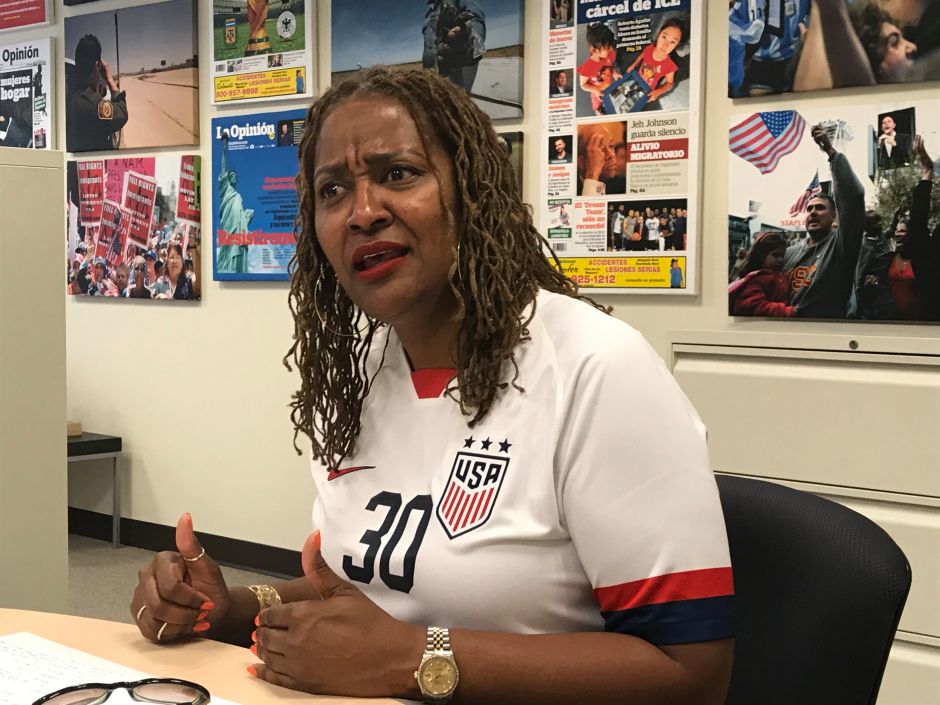 State Senator Holly Mitchell, campaigning for a seat on the Los Angeles County Board of Supervisors, said it is these times of crisis, when we realize that elections and leadership matter.

"We have to choose people who are compassionate, able to do hard work, make decisions, and do the right thing. Therefore, I have to say that the November election will matter, "said the senator during an online meeting with the editorial board of La Opinion.

From her home where she remains confined with her 19-year-old son and her 13-year-old Golden Retriever dog, in respect of the "Stay at Home" order, decreed to prevent the spread of the coronavirus, she commented that she does her job as Committee chairperson. Senate Budget and the Shared Budget Committee to make available resources that allow the state to help everyone.

Mitchell vies for District 2 seat to replace supervisor Mark Ridley Thomas, who will leave the Board of Supervisors next year, at the end of the period that the law allows him to occupy the position.

Third generation angelina, was elected to the California Assembly in 2010; and in 2013 he jumped to the state Senate.

The senator has taken advantage of the quarantine to connect with her represented by phone or teleconference.

“To be honest, it is the other person on the line who takes the conversation to the campaign, before I talk about it. I am told, Holly no one knows what the county does. Now I think they have a better understanding in terms of providing that network of services that people need to survive. ”

However, he said he also listens to concerns by thinking about how to find solutions through public policies.

Between the concerns that have been raised during your quarantineThey highlight those of fast food business workers like McDonald's who ask for a risky salary and safety equipment because they have not been given masks.

“I am also listening to tenants who have been laid off or had their hours reduced, and cannot pay the rent. They are looking for the government to protect them; and there is confusion about the moratorium on evictions. "

But he has also spoken to small rental homeowners who need rent to pay the mortgage on their building or the duplex they rent, and their banks are giving them no grace period to pay.

Parents with children in schools who do not have consistent access to the Internet have told her that even though the school was able to give them a tablet, without the Internet at home they cannot see the teacher or fulfill their lessons.

"That is troubling, because according to statistics from the Superintendent of Public Education, minority children are always behind in math and reading."

While Parents with children with disabilities complain that their children are not receiving any support from what they get when they attend school.

Mitchell advanced to the second round in the March 3 election, days after the world changed due to the coronavirus. Los Angeles City Councilman Herb Wesson is 2,500 votes below his opponent, anticipating a very close campaign for the November general election.

"ANDCOVID-19 is going to impact my campaign, but the reality is that it is impacting everyone, as well as my opponent. The way we approach and educate voters has to be different ”, I consider.

The advantages that he considers in his favor over his opponent are: a strong presence on social networks, his record and his abilities to create public policies.

"I am a strong leader, better equipped than my opponent, and once elected I will pay off in Los Angeles County to ensure that African Americans and Latinos have the resources they need to be healthy."

She added that she is proud of the coalition that has managed to bring the Board of Supervisors together for her campaign, and happy about the support of Commissioner Ricardo Lara and leader Dolores Huerta.

The senator said that as a Los Angeles supervisor she would prioritize the following topics:

FrancExpat Santé: living abroad and getting treatment in France

They welcome more than 7,400 new citizens in Los Angeles