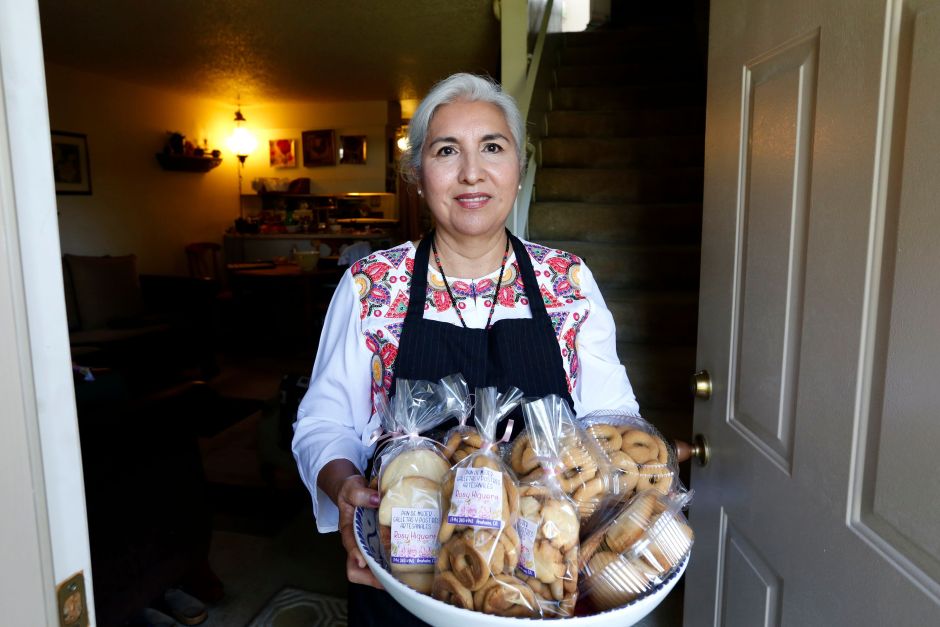 Immigrant says to connect with their customs when preparing coricos, women's bread and other delicacies of their land

When the teacher Rosy Higuera starts to knead the cornmeal to make coricos, the traditional cookies of the north of Mexico, the memories gather.

"The smell of cornmeal reminds me of my people. I get a lot of longing for my land and my family. I connect with my customs ”, says this Mexican immigrant.

Rosy not only prepares the delicious coricos made with cornmeal, eggs, shortening and sugar but also makes other products of the typical Sinaloa pastry such as the woman's bread that has brown sugar inside and wheat empanadas.

A few years after emigrating to the United States, she says that nostalgia invaded her and she found that the preparation of breads and cookies that her mother Meli used to prepare, helped her feel better and close to her roots.

But he also discovered that he could sell his cookies among his friends and earn extra money.

Rosy came to southern California from his native Mocorito, a municipality north of Sinaloa, which saw members of the popular group Los Tigres del Norte born in Rosa Morada, one of its towns.

This immigrant from Sinaloa, a pastry lover, is an educated woman. She graduated from the Normal School in Sinaloa as a teacher and from the natural sciences career. He taught for many years in Mexico until he retired.

She arrived more than 30 years ago to meet with her husband Alfredo who was already working in California. They settled in the city of Anaheim in Orange County where he currently lives with his family. The eldest of his Pavel children who is now 38 years old is the only one born in Sinaloa; and the two youngest children, Alfredo, 32, and Mara Lucia, 22, were born in the United States.

At the beginning when he began making the choruses, he did not think about selling them but they were only for family consumption. Then he started giving them away among his friends. When they asked for more, he decided to do to sell in baby showers and other parties "I currently sell cookies in a restaurant and fill orders for events," he says.

The love for pastries comes from family. His mother had a market stall where she sold coricos, women's bread, empanadas, muffins – known here as cup cakes – and other delicacies from the Sinaloa home-made pastries.

“My mother made bread in a wood-fired earth oven. Baked the trays with the help of a shovel, ”he says.

Rosy not only helped to make bread but also went out to sell on the street.

“I have always been very luchona and moved, very good merchant. He went house to house to sell the bread. I was selling everything, ”he says.

He also made small cranberries – sweet milk – and sent his brothers to sell them. "Sometimes they ate them and sold nothing," he says laughing.

At his home in Anaheim, in his small kitchen, Rosy juggles to prepare his choruses and other Sinaloean breads.

"In a corner, I settle to make my cookies," he says.

As he prepares them, the smells and flavors of his house immediately come to his mind, helping everyone to his mother. “I remember even the noise of the casseroles,” says this woman whose greatest pride is to have been a teacher of her people and that her former students continue to call her a teacher.

Rosy actively participates in the promotion of his native Mocorito, considered a magical town in Mexico; and is co-founder of the Sinaloense Fraternity of California since 1991.

However, he happily confesses that making choruses is one of his passions as it gives him a lot of satisfaction because it allows him to follow his family's baking tradition and feel close to his land and his people, even thousands of miles away.

Parking lots are set up to serve diners

Antony Blinken, a Francophile as Secretary of State

Eliminate charges that make it impossible for exreos to reintegrate into...

What is involved in the Border Patrol deployment?

The Dallas Museum of Art extends its exhibition on Dior