Home Latest News They reveal mural depicting the past, present and future of the Los... 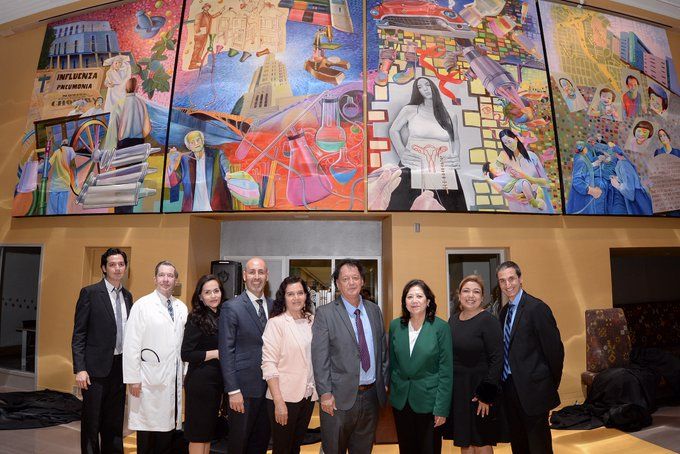 The work of Mexican painter Manuel Benítez is called ‘A history of community service’.

The painter Manuel Benítez Espinoza (c) together with the supervisor Hilda Solís and other officials. (Supplied)

Manuel Benítez Espinoza was 30 years old when he came to visit Los Angeles from his native Nayarit, Mexico, without imagining that this visit would change his life.

He felt that he had a heart problem and without medical insurance, a friend recommended that he go to the LAC + USC Medical Center General Hospital, located in Boyle Heights.

“There they treated me very well, they checked me and told me that what I had was depression and not heart problems,” recalled Benítez, who is now 62 years old.

The medical staff advised him to do something that distracted his mind. Benitez had an interest in painting so, without waiting much, he began to make his works of art.

“First I started drawing pictures and then painting. I painted in black and white, but then I shot to paint in color, ”said Benítez.

He enjoyed his hobby so much that he mastered painting perfectly until he became a professional painter, sculptor and muralist.

After becoming known in his native Mexico, the painter was invited to present some works of art at the Mexican consulate in Los Angeles and later to paint a mural in Lynwood.

The director of the Los Angeles General Hospital LAC + USC began to see his work and his career and offered him a new project.

"It was to make a portrait of the hospital from the human aspect and the delivery of its people," Benitez said. "I feel that fate brought me back to the hospital where it all started in the matter of painting."

On Thursday, the mural “A History of Community Service” or “A history of community service”, painted in acrylic on canvas by the painter Benitez, was unveiled at the Wellness Center of the LAC + USC Medical Center.

Supervisor Hilda Solís, who was present for the unveiling of the work, said that the Mexican artist was so captivated by the legacy of service offered at the LAC + USC Medical Center that he agreed to work with community members to accurately represent the complex of the medical campus and its history, sometimes problematic, through "a charming mural".

Solís is the representative of the first district that includes the LAC + USC Medical Center hospital. "We all benefit when LA County departments proactively commission public works of art that reflect the dignity and character of our diverse neighborhoods," said Solis.

The figurative / narrative art mural is painted in acrylic mounted on canvas on wooden frames. It is divided into four squares of four by three meters each.

The colorful images attract a lot of attention, but it impacts their meaning more.

The first picture represents when diseases, such as influenza, were difficult to control and some nuns began to assist the sick. In the image you can also see the carts that carried the sick. Later we talk about how the hospital was improving at the same time as science was advancing.

The third image of the mural, which for many may seem strong, represents how Latin women were sterilized without their consent.

"It's like a form of public apology that the hospital makes so that it doesn't happen again," Benitez said.

The muralist said that his daughter was the one who modeled and in the painting he is seen holding the image of a female reproductive system.

"She could not get pregnant and after posing for this painting she calls me and tells me that she is pregnant … I don't know, maybe it was a sign of something good to prove this," Benitez thought.

The last picture reflects the faces of several children and doctors performing an operation. This is a symbol that the hospital serves all people regardless of social status, ethnicity or age, said Benítez.

A new tech fund for the benefit of French entrepreneurs in...

The LA School District joins efforts for the 2020 Census

Latinos are disappointed that Bernie Sanders is leaving the presidential race