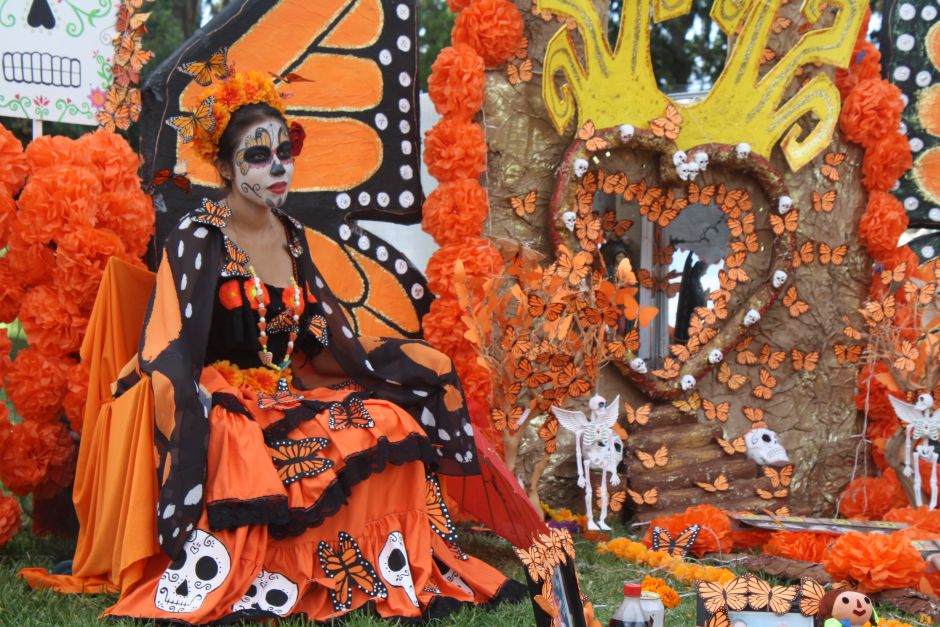 On its 20th anniversary of the Day of the Dead event, the cemetery celebrated it with 40,000 souls

These were some of the reasons why almost 100 families decided to raise an altar in the Hollywood Forever cemetery that held on Saturday, November 2, their twentieth anniversary of the traditional Day of the Dead. On this occasion the theme of the celebration was the 'Sacred Migration', so all the people who participated built an altar with this theme.

In the case of Jenny Morales, daughter of migrants, at her altar "The Monarchs of Morales", the young woman uses the monarch butterfly in all spaces where she placed photos of her loved ones, including her father Alfonso Morales, who died four years ago years of a stroke.

In addition, she and her niece dressed as butterflies symbolizing the transformation of the cocoon, and in that way, tell people who stopped to contemplate the altar, that life does not end, only transforms and does not stop, but will depend on each of us how much we want to remember and keep alive the image of that loved one who has come forward.

"The monarch butterfly is a symbol of migration and all of us who are here today are or come from migrants," said Jenny, who added that it took about two months to plan the altar where several family members participated.

In the case of Hazel, an immigrant from El Salvador, he could no longer return to his country to say goodbye to his grandparents with whom he grew up, which is why for 11 years he has built an altar in the Hollywood Forever cemetery to remember them. In addition, her husband Josh, who is Anglo-Saxon also participates and now he also honors her relatives.

"Thanks to this type of event, many people who did not know about the celebration now know it and apparently they like it very much that some have adopted it," said the young woman, who stressed that the preparation of the altar in honor of her relatives It brings you many memories such as your grandfather's scent of tobacco, or your grandma's salted beans.

Hazel said that he increasingly includes more people at the altar and that has helped him to "remember and value how important they were in his life."

We are all immigrants

One of the largest altars and where people stopped more frequently to contemplate and take the selfi, was Alfredo Romero, who built a wall that symbolized the border wall where people appear who died in their attempt to reach the US.

On a personal level, Alfredo said he wanted to honor his grandparents and uncles who have already left, but that, thanks to them, now his family has a better life in the United States. That's why he has photos of his grandfather working in the field.

"It is important that the new generations find out that it was not easy," he says.

However, the reason that has led him to perform an altar for the fourth consecutive year was the death of cancer by his younger brother Victor Hugo.

Before he died we came to this event and he loved it, Alfredo said. At that time the doctors had already evicted him and although we had hope he could not stand it.

"That day he was asking me if he was going to build an altar in his honor when he left and a few months later he died," he said.

The young man explained that the preparation and construction of the altar has been another reason to celebrate with the family to remember those who came forward. Although this time he took the opportunity to send a message of solidarity with migration in the United States, especially at this time when the migrant community in Latin America is constantly under attack.

´´I´m sure that if the new generations learn how difficult it was for our ancestors to reach the US, and everything so that our families had a better life, they will value and continue fighting not only for the family, but for the migrants who now have afraid of being deported, '' said Alfredo, who needs 12 relatives to simply build the altar where at least 15 relatives and thousands of people who died trying to cross the border were remembered.

Lisa Lechuga, granddaughter of migrants, said that she could no longer meet her grandparents since they died when she was a child, but through the celebration of the Day of the Dead she could know the tradition better and for 11 years she has built an altar to remember her relatives, however, this year she and her husband, Even Batolatti, decided to do so in honor of the children who have died at the border in their attempt to reach the United States with their relatives.

We firmly believe that all human beings, especially children, deserve to be treated with dignity and respect, said the couple in a letter placed next to the altar where she painted – herself – the face of some of the children died while in custody of Migration authorities

Lettuce expressed that he did not want to be very political in his altar message, but considered it was of the utmost importance that the thousands of people who come to celebrate the Day of the Dead to the cemetery, who know and know what is happening at the border with the minors; she hoped that most people would agree with her about the fact that "there is no human being who is illegal."

For Juan Corrales, born in the United States, but raised in Durango, it took a tragedy, the death of his godson, to value and learn more about the tradition. Although he already knew a little, the young man said that the process of participating and building the altar helped him understand its importance. Even, her sister who had been 10 years dead, for the first time on Saturday they remembered her as other relatives who have left, but were very important in her life and family.

Corrales said it was his first time participating with an altar and emphasized that everything was very easy since he only communicated with the cemetery authorities and immediately told him that there were spaces, presented a project and was accepted. He affirms that he liked it and felt very well remembering all those loved ones who have passed away and now he hopes to remember them annually.

The Hollywood Forever Cemetery opened its doors to the public on Saturday from 11 a.m. and culminated his countless activities at 12 p.m., with a concert with the rock band Café Tacuba, which vibrated at least 40,000 souls who had celebrated most of the day in the holy field.

The celebration was so diverse and numerous that at times it was difficult to walk between the avenues of the building between thousands of catrinas and disguised people, including minors and entire families.

In addition to music and altars, those present enjoyed art galleries, processions, photographic exhibitions and folk dances among other activities.

There were some people who complained about the commercialization of the event and indicated that the main meaning of the celebration was being lost, while others welcomed it and underlined that the commercialization allows it to reach more people and in that sense, more individuals will know and possibly they will adopt some aspects that please them of this millenary tradition.

Why do u want to join this company?

Why do people buy white furniture?

Can you use a calculator on the Louisiana real estate exam?