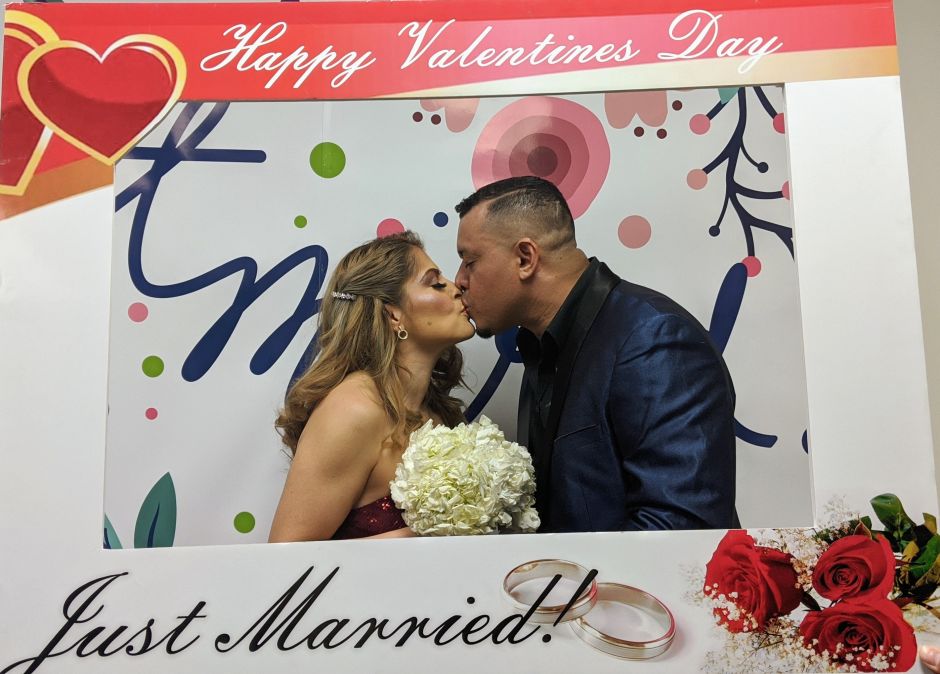 They go to the civil registry to unite their lives during February 14, date in which an appointment is not required to be attended

Gustavo Flores and Karen Vargas had talked about marriage for a while but failed to finalize the plan, or find an appropriate date. The couple has seven years of meeting and three of them, dating.

So a little less than two weeks ago they both came up with the idea of ​​getting married on Friday, February 14 at 11:00 a.m.

“We plan everything fast. He bought me my dress and we came to get married, ”said Karen excitedly, who wore a long white suit, as she would have done at a large wedding in front of dozens of guests.

His partner was not far behind, he visited a black and white outfit, which he combined with shiny shoes. The celebration was accompanied by their mothers, a brother and their two children.

"I want to tell you that I love you so much and I hope I can fulfill all your wishes," Gustavo told the bride glad that in a matter of minutes Karen would also have the last name Flores.

The boyfriend agreed to be a little nervous but said he was very happy to have a family with Karen.

The couple arrived at the Norwalk civil registry office, a city southeast of Los Angeles, to make their marriage official; just as dozens of people did

Portia Sanders, spokesman for the civil registry office, said that this celebration of marrying lovers during February 14 has been held for a long time and is very popular.

The office performs weddings on a daily basis but on Valentine's Day all the employees of the place place a little more sparkle for the special event.

"Usually (the couples who do) are those who have this date as their anniversary and / or so they don't forget the date (in future celebrations)," he explains.

Sanders said that during Valentine's Day he has seen couples and family members who arrive dressed from the most elegant attire to those who arrive with shorts and shirts. "We've seen everything," he said.

This Friday, the couples began arriving at the place from 8:00 a.m., to officially celebrate their marriage. Whether dressed casually or with traditional wedding dresses and a bouquet of flowers; Everyone looked radiant and in love.

In the photo room was Laghton and Christina Hernández. The couple said they have been in a relationship for three years and that they have a 2-year-old child.

"We chose this day so you don't forget the anniversary," Christina said.

“First we wanted to get married for November 25, which is our anniversary (of boyfriends) but we talked and said it was good, that we would do it today (February 14).”

Froy Ruiz, father of the bride, said he was very excited to see his daughter marry his partner.

"We all celebrate a lot that they are getting married today and that they chose this significant date," he said.

His wife and mother of Christina, Lupita Ruiz, said she was still surprised but very excited to see her daughter and son-in-law marry although only with part of the family present.

The grateful and excited boyfriend told his wife that now that they are married they hope to last as long as other couples they have seen.

"And we want our children to see what real love is," Laghton told Christina.

Walter and Heisi Camilo were also in the photography room. They said they decided to get married on February 14 after four years of dating.

"This is a very special date to remember our love, which is the basis for this special day," said Walter, assuring that the atmosphere felt good vibes everywhere as many couples decided to enter and leave the civil registry office. To unite their lives.

Heisi, who was not wearing a white dress, said she was saving it for when they got married in the church.

"For now I just wanted to wear this dress," said the excited bride.

Requirements for the wedding

Sanders said it is only on February 14, if he falls from Monday to Friday, when they accept couples to marry without an appointment.

“Both must arrive at the office and bring their witness. If they don't have one, here they are provided one for $ 20, ”the spokeswoman said.

For those interested in getting married on Valentine's Day, it is recommended that they apply for their marriage license online.

"The two are coming and here they get their marriage license, that's $ 91 and for the ceremony it's $ 35 and they can bring a witness," he explained.

The civil registry of the county of Los Angeles realizes around 50 marriages by the civilian in a regular day, in its seven offices.

However, this figure rises when this special date that is Valentine's Day arrives.

Couples can apply for their marriage license in advance at the offices or on the web portal: www.lavote.net

The main office in Norwalk is located at:

The other offices are:

Dominique Ansel permanently closes the doors of his restaurant in Los...

[Webinaire] Covid-19 and health insurance: how to protect your health and...