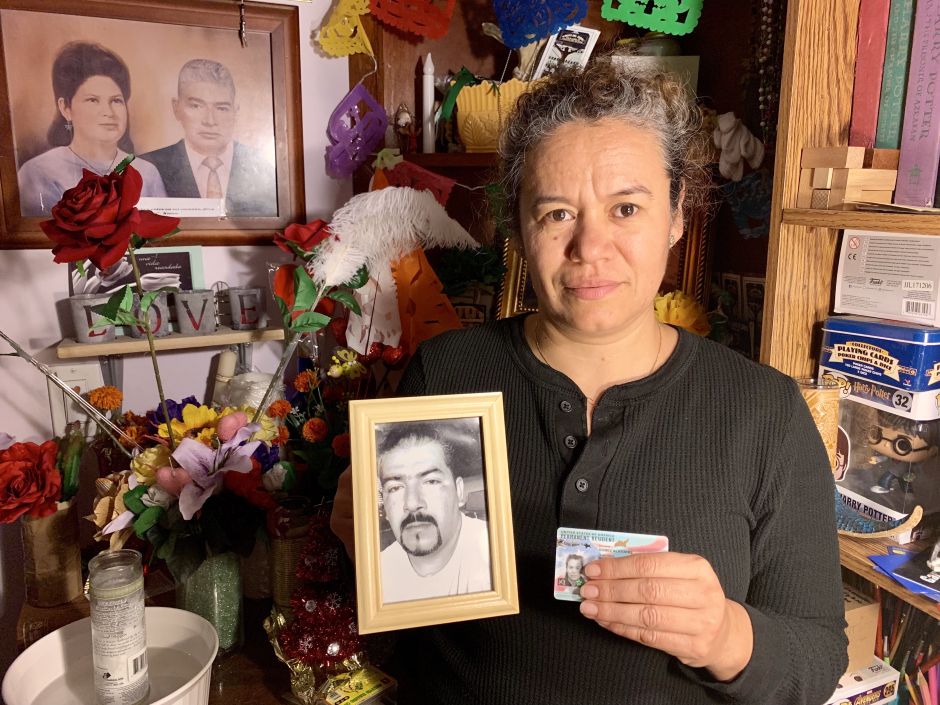 An unexpected accident causes her husband to die, and she is left alone with the immigration adjustment process

When Magdalena and her husband Hilario Gómez were closer than ever to begin their residency procedures in the United States, after more than two decades of waiting, a tragedy found their home. Hilario lost his life in a sudden and unexpected accident.

However, one year and two months later, his wife Magdalena obtained the card permanent resident.

“I feel happy, but at the same time very sad because my husband is not with me to receive his residence and enjoy something he always wanted to have,” she says.

24 years ago, Magdalena and Hilario left their town in Jalisco, Mexico, and emigrated to the United States, bringing with them their eldest son who is now 25 years old.

In Los Angeles they formed a home and had three more children, a daughter who is now 22 years old, and some cuatitos – male and female – of 12 years. Hilario worked in recycling, and Magdalena as a cook in a popular chicken business.

“In 2001, a brother of Hilario applied for residence for him and for me because he was his wife through petition 245 (i). The wait was supposed to be for ten years, but since 9/11 (the terrorist attacks) came, the process was extended, ”explains Magdalena.

As the petition did not advance, when his daughter Joana, born in the USA, turned 21, they decided to submit another application for adjustment of status.

"In 2018, we went to see the immigration lawyer Eric Price who asked us to gather all the documents we needed to start the process, ” accurate.

Magdalena says that the lawyer explained to them that since they had a previous petition, the 245 (i) added to the residency application they would make through the adult daughter, would not have to travel to the US embassy in Ciudad Juarez to ask A sorry.

In June 2018, they met all the requirements to adjust their immigration status. The couple was very lively. Finally, they could become residents.

However, two months later, a misfortune in his own home changed everything.

“I went to leave my younger children to school. When I returned home I saw that my husband was lying under the car in the yard. I thought I was fixing something, but when I saw that it was not moving, and two neighbors trying to move the car, I suspected something bad was happening, ”she recalls overwhelmed by the feeling.

On August 10, 2018, Hilario died at the age of 45 in a mishap when he tried to stop with his body, his vehicle that accelerated due to a mechanical failure, began to walk only in reverse.

"He died instantly from the impact received," explains Magdalena.

Hilario's unexpected departure was a blow to the whole family. "It has been very hard," he says.

Magdalena came to think that since petition 245 (i) had been presented by her brother-in-law, her husband's brother, when Hilario died and became a widow, she could no longer settle.

"Attorney Price told me that there was no problem, and that my procedure was going ahead," he explains.

Magdalena filed the residency petition without her husband in April of this year. "I had the interview on October 9 and a few weeks ago, I received the work permit first, and then the residence."

This 43-year-old mother has a hard time smiling even when she is already a US resident, something she always wanted.

“For many years I felt frustrated, unable to move forward and have a better job for not having papers. Now I have them, but my husband is not with me. I really need it. We were 24 years old when he died. I buried him exactly 26 years after meeting him, ”he adds.

Trust that the residence, open the doors for a better paid job, and to study.

“I want to study to be an interpreter in sign language,” he says. But she also yearns to become a citizen in five years when she qualifies for that procedure. “I want to do it in order to vote. I have lived more years in this country than in Mexico. If all those who were residents became citizens, another rooster would sing to us, ”he says.

Already with his resident card, Magdalena will travel to Mexico in December for a week to visit his parents, whom he has not seen for 24 years. “I will fulfill my husband's dream. He wanted me to become a resident to go see my parents. "I don't have anything to go there anymore," he told me, and his parents had already died, "he says.

What can we learn from the history of Magdalena?

That even in the darkest moments of our lives, there is still hope; and for that reason, we have to continue fighting. Magdalena suffered one of the worst tragedies I have ever known, but she was able to move through this complex process.

Why didn't she have to leave the country for a pardon?

Because she was a beneficiary derived from her husband in petition 245 (i). Petitions 245 (i), which were issued until April 30, 2001, gave immigrants the opportunity to obtain residence in the United States with a fine of $ 1,000.

How much is the average waiting time for those who request an adjustment of their status under 245 (i) in the case of siblings?

Normally the waiting period in a petition for brothers and sisters who are from Mexico takes 22 years. For the Philippines it is 21 years, and for India it is 15 years. The rest of the world has a waiting time of 13 years.

It is important to clarify that petitions 245 (i) ended on April 30, 2001. Immigrants who made a petition after that deadline need another route to obtain residency. In addition, the current government has mentioned that it will eliminate the category of brothers in the future. It is important that immigrants, who do not have another relative with legal status in the country, but that a brother or sister filed a petition for them before this administration or a new one, eliminate it.

How mindfulness meditation helps us live the present better

Hollywood Seeks Healthcare Workers… So It Can Resume Filming