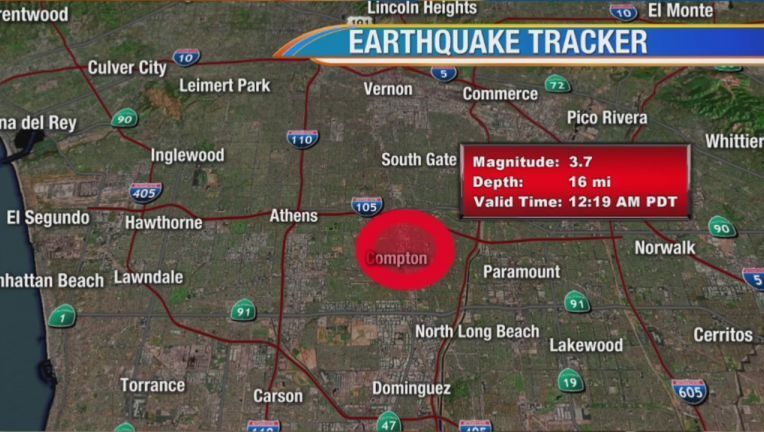 An earthquake of magnitude 3.7 hit the Compton area Friday morning, according to the United States Geological Survey.

The Compton-centered earthquake struck at 12:20 a.m. Y had a depth of 14 miles. According to the Geological Survey, the earthquake struck 1.5 miles west of East Rancho Dominguez and 2.4 miles southwest of Lynwood.

People felt tremors in Orange County and parts of Los Angeles, even in the San Fernando Valley, East Los Angeles and Norwalk, the entity said.

There were no immediate reports that the earthquake caused damage or injury. A Tweet from the Communications Division of the Los Angeles Police Department said "there was no impact on the LAPD Dispatch Centers" after the earthquake.

No impact at the LAPD Dispatch Centers following a 3.7 magnitude #earthquake centered near Compton. About a dozen burglar alarm calls since the shaker, otherwise business as usual. The 9-1-1 system in LA City is fully operational.

Earthquakes occur when millions of residents across the state participated in the earthquake drill Great shakeout Thursday, 30 years after the earthquake of magnitude 6.9 Loma Prieta that shook northern California in 1989.

Hours before the Compton area was hit, a tremor of magnitude 3.8 struck near Ridgecrest, which was where two powerful earthquakes struck in July.

Governor Gavin Newsom recently submitted the application MyShake, which is designed to give people a notification in seconds about an earthquake ahead.

Win tickets for the Kids United show in Miami Beach

[Webinaire] Tourism, management and digital professions: what transformations are underway, and...