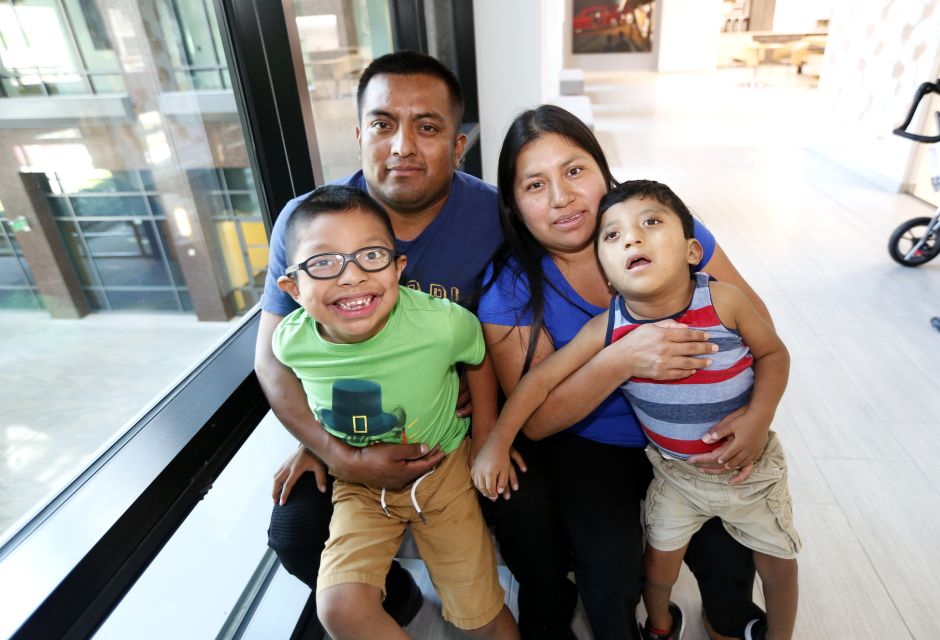 Zacarías Alonso Mendoza and Juana Gómez Canseco got an unexpected surprise when This week they received the news that they are already permanent residents of the United States, because their only two children, born with severe disabilities in the United States, will need medical attention and care for life.

"I'm very happy. Now I can feel freer to take my children to many places because the truth if I was afraid that suddenly a raid could arise, they would deport us and the children will stay hereí ”, says Zacarías Alonso, 35.

Migration lawyer Alex Gálvez surprised the couple of Mexican immigrant parents with the good news of the residence at the Eddie El Piolín Sotelo radio show.

“I want to tell you that after the judge of the Court approved to give you residency, the prosecutor had 30 days to appeal your judgment and since he did not do it, you are already residents,” says the lawyer.

Zacarías and Juana are from San Bartolomé Quialana, Oaxaca, Mexico. They emigrated to the United States 12 years ago after marrying in their town. They live in Glenwood Springs, Colorado. Zacarías works in construction.

Seven years ago they had their son Ever Isaac; and three years later, to his second son Ezra Abraham. Both were born with severe disability; and require attention 24 hours a day.

Zacarías, the father of the minor, says that two years ago when he tuned to the radio and listened to the Piolin Show, he was lucky that on that day, the immigration lawyer Alex Gálvez had been invited.

“He was talking about how undocumented parents with children with disabilities can obtain residency. I didn't know anything about that, ”he says.

At the end of Gálvez's intervention on the radio, Zacarías decided to make a telephone appointment with the lawyer. “I didn't want to say anything to my wife because she wouldn't have left me. I would have given him distrust, ”he says.

At the distance between Los Angeles and Glenwood Springs, Colorado, lawyer and father talked. When he decided to give the case to the lawyer Gálvez, he told his wife who, surprised, could not believe it.

“The entire process was carried out at the immigration court in Denver, Colorado. To save family expenses, I only sent a lawyer on the day of the hearing with the judge, ”says Galvez.

Finally this week, it was confirmed that the couple of parents would no longer be living in the shadows because they had been granted residence.

Attorney Gálvez says that many undocumented parents are afraid to request this relief because they think they are not eligible for the issue of Public Charge that will deny permanent residence to those who have received certain government benefits from October.

“I want to tell you that in these cases of children with serious health problems, this extension of the rule to the Public Charge will not affect. On the contrary, the more help the government has received for the treatment of their children with a serious special condition, it is better to show the judge as evidence, ”he says.

Galvez explains that immigration lawyers across the country have had to educate judges because this relief is not very common in states where there are not many Hispanics.

"It is called Cancellation of Removal and it is given undocumented parents with citizen or resident children with severe health conditions, although it can also benefit parents or spouses”, Precise.

And it emphasizes that it is very important to clarify that to benefit from the Cancellation of Removal, the son, husband or father must suffer a very serious health condition that requires help for the rest of their lives, as well as treatments and medications.

“All this has to be proven with medical evidence. The documents must speak for themselves. So you should not bring sick relatives to the judge. In this case, the children did not have to go to court, ”he says.

"The cancellation of the removal is such a true and strong relief that 100% of the cases result in a victory, and only a judge can approve them," he says.

The lawyer emphasizes that applicants for residence through children, husbands or parents with severe health conditions must meet basic requirements to benefit. "They must have lived at least ten years in the country continuously, have no criminal record and their children should not be over 21 years old”, He points out.

It also recommends that you seek immigration lawyers with experience in winning such cases. “Many Hispanic parents with children with disabilities or very serious illnesses do not know that this relief exists or are afraid to request it,” he laments.

Bathed in tears, Juana Gómez Canseco, 34, couldn't hide her happiness. "I'm very happy. Residence means a total change of life. I only ask God to continue giving us strength to push our children forward because if he gave them to us, he knows what we can do.r, ”he says.

And he confesses that raising two special children has been very difficult. “My boy was born 29 weeks. He was in the hospital for two months. From there, I have not rested. A week, he took them to 13 therapies, ”he says.

Juana called on the community to see if someone wants to donate a Van as they transport the children in a vehicle that is not adapted for those with special needs. She alone has to load and raise her children several times a day. "If I have help, but my husband works all day to pay the rent and bills," she says.

The popular radio conductor, El Piolín Sotelo says that the history of this family of Oaxacan immigrants, leads him to think that it is important that we do not complain about small things.

Better yet, he praised the parents' strength to raise their children and move them forward; and asked the Latino community to support and shake hands with families with children with special needs as much as possible.

"We have a mission to help those in need," he says.

Juan José Gutiérrez: "The people responded against Prop. 187 as never...

What are the arguments in favor of Proposition 22?

In these difficult times we are with you

40 years in prison for former LAPD agent for murder of...