Home Latest News Students learn from the Day of the Dead tradition and welcome immigrant... 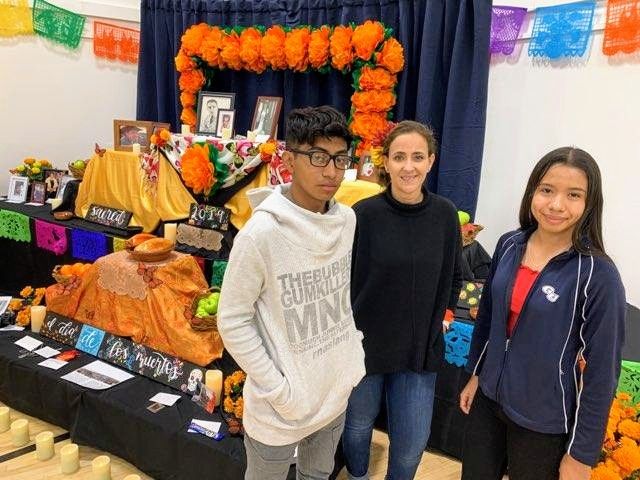 Yuri Ochoa brought an ornate toy cart to put as an offering for the altar of the Day of the Dead at his school in the San Fernando Valley.

Ochoa has a special affection for this cart since it is the last gift he received from his parents before they died when he was only 9 years old.

"My mother had cancer and on April 30, 2010 we took her in the car to the hospital in Guatemala," she recalled on Monday, a few days after the celebration of the holy saints in her home country and in many Latin American countries. .

“And when we were on a lap, a truck threw us into the ravine at about 3 in the afternoon. There we were until about 7 p.m. when they rescued us, ”added Ochoa, already in a voice between cuts.

After the death of his parents Ochoa was under the tutelage of his grandmother and eventually at age 15 he moved with his uncles to Los Angeles. He is now a student at Grover Cleveland Charter High School in Reseda, where the altar was held.

Kassandra González, another Magnet student for the study of the Humanities at Grover Cleveland Charter High School, wore a scarf to remember her grandmother who died two years ago.

“She did not live with us but visited us often,” said the 9th grade student. "She died because of her age," said the student of Salvadoran and Mexican roots.

Both students agreed that celebrating this day at school is a good option as it provides them with opportunities for knowledge and encourages them to continue celebrating those who have left.

"It feels good, especially with the people inside your heart so you don't forget them," Ochoa said.

Gonzalez said he was pleased to have learned the meaning of the essential objects that the altar should carry, such as flowers, butterflies, fire and water.

"This gives you an idea that it doesn't have to be something sad, but rather a celebration of the dead," said the student.

Inclusion for all students

Although the school has informed students about the day of the dead for many years, on this occasion the teachers and staff of the campus wanted to do something a little different by including English learners to be part of the altar.

Approximately 40 students from the Grover Cleveland Charter High School took their offerings to the altar that would only be on display for one day.

“The students brought objects for the altar and we explained the tradition of the day of the dead and its meaning,” said the teacher of the English learner class, Anelis de la Vega.

The professor said that for the first time the Magnet de Humanidades program joined students who have recently arrived and are mainly from Central America. The goal is to make them feel welcome to this country and its diversity and traditions.

Academically, the altar is part of an extensive course about Mexico where students learn the origins of the Mexica, its culture, traditions and history. This year, the scope of the course has new meaning for the existing student population of the school, as well as for new immigrant students.

“Although the (school) magnet has celebrated this tradition for more than 30 years, we are delighted to give a new meaning to the altar presentation, especially through this unique design by artist Aldo Cruz addressed to our Cleveland student community” said Jennifer Macon, humanities coordinator at Magnet School.

“Many of our students come from different parts of the city, the county, maybe other parts of the country and certainly from other countries, so it is very significant to have this type of activity where we can join the school to appreciate what We have in common our love and appreciation for others, ”added Macon.

The altar had as one of its main images the monarch butterfly that represents migration, which for many people has become the symbol of the immigrant's journey. In school this served to represent not only the journey of new students from the south, but also to represent the academic journey of students as they evolve into adulthood as leaders and university students.

2-year-old baby dies in Torrance after being left in the car...

French Boss, episode 9: there is no age to undertake