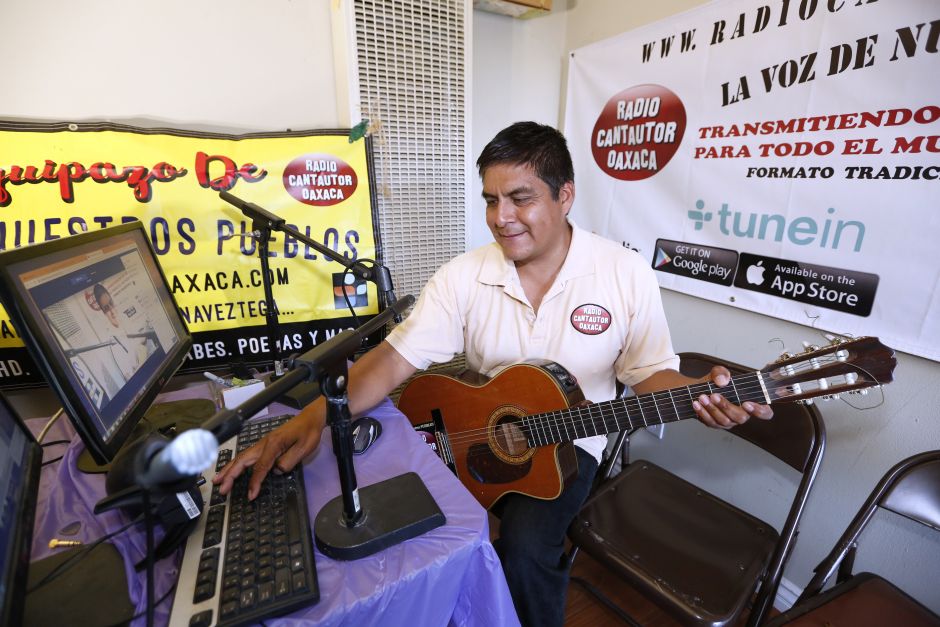 It is a radio that in Zapotec promotes traditions, uses and customs; and is seen as the voice of the Oaxacan peoples

The Oaxacan musician Adrián Beltrán Morales created the Radio Cantautor Oaxaca as an online platform to promote his own music, but five years later he has become a social service vehicle for the Oaxaca community of Los Angeles and a means to spread the customs, customs and traditions of the Oaxaca state.

Those who hear it, feel traced back to their villages.

Much of the programming of Radio Cantautor Oaxaca is broadcast in Zapotec, the main language of Oaxacans living in Los Angeles.

“The need to have a platform to promote my songs led me to found this radio. I am a composer. I tried to play on several radios, but it costs and it was impossible for 40 and 60 of my songs to play every day, ”he says.

Adrian was born in San Bartolomé Zoogocho, a town in the Sierra Norte de Oaxaca. From the age of five, his brothers taught him to play the guitar.

At age 22 in 1992, he emigrated to New York. After a while, he returned to Oaxaca where he spent two years and when he returned in 2008, he decided to come to Los Angeles where he has always made a living as a musician.

“I compose my songs and play music. I record them myself. It's romantic music, cumbia and rancheritas, ”says Andrés.

"My father taught me since I was little that music is a world passport that opens doors wherever you are," he says.

Adrián has become prestigious as a musician under the artistic name "The Cantautor de Oaxaca". Hence the name for Radio Cantautor Oaxaca.

“Music is a vocation. If it had not been for that love that I have for him, I would have long discarded, ”he says.

Radio Cantautor Oaxaca transmits varied music 24 hours a day. Between the programming the songs of the Cantautor of Oaxaca and traditional Oaxaca music are mixed.

“I chose them because of their Zapotec and their joy; and because they are always smiling, ”he explains.

Much of the programming is in Zapotec, since most Oaxaca immigrants living in Los Angeles speak Zapotec.

“Los Angeles is Oaxaca. The eight regions are here, ”he says.

Veronica as Natalias are trilingual, speak Spanish, English and Zapotec.

The work of Adrián and all those who participate in Radio Cantautor Oaxaca is voluntary.

And if only musical, they began to function as a radio that serves the Oaxaca community of Los Angeles; and spread the customs and traditions of Oaxaca.

“We promote the festivities of our towns that are celebrated here in Los Angeles. There are many. On weekends they are full of cultural parties with music, dance, food and dance, ”says Adrián.

“And if they need help, we try to meet those needs. For example, a person has cancer and needs support. If someone is lost and they can't find it. We let people know when someone suffered an accident and is in the hospital, ”Verónica explains.

Adrián says he already has reporters in all parts of the world, mostly from Oaxaca, who collaborate voluntarily.

Guests are also often invited to community events in the Oaxaca community. “We go free as long as the event is for the benefit of their people,” says Adrián.

“We invite people to go because they are parties for the benefit of the people of Oaxaca,” observes Veronica.

The singer-songwriter from Oaxaca carries his guitar and sings.

Five years after having emerged on the Internet, Radio Cantautor Oaxaca begins to see the results. "The most beautiful is when people tell us that thanks to the promotion we made, the event was full and they thank us," says Adrian.

They also follow up on the works to verify that they are actually done in Oaxaca. “And we filmed the events so that when help arrives, people see how hard their countrymen work to raise funds to help them. Among Oaxacans, there are very good people and a lot is done, ”he says.

Veronica says that she is pleased that they already recognize them and call them by their names. She is already identified as The Yalalteca Doll. “Yalalteca comes because that's how they tell women that we are from Yalalag, Oaxaca; and doll because I changed several times in the celebrations as in weddings in Oaxaca. Then, people began to say that it looked like doll by cambiate me so much, ”he observes.

He says she never imagined being on the radio. “When Adrian proposed it to me, I said what I am going to do, what I am going to say. And he already had another girl. I told him, what do you want me for. I am not a second table dish, ”he laughs.

In addition to being a radio host, Verónica works in a restaurant and cleans houses.

Natalia worked in a factory and cleaned lunch boxes at dawn.

"This project is an opportunity to contribute something for our culture and serve the community”, Natalia best known by Nolhe Yadao says that in Zapotec it means“ woman from the hill ”.

"The name came because where I was born, there are hills everywhere," he says.

Where to listen to Radio Cantautor Oaxaca?

"You can listen to it on your cell phone by downloading the Radio Cantautor Oaxaca application on TuneIn”, Says Adrián who trusts that they feel happy because they are not only heard by Oaxacans but also by people from all over Mexico and Guatemala.

Radio Cantautor Oaxaca has its rules, no rudeness or jokes are told with double meaning.

“We have to focus, be ethical and do it well,” says Veronica.

You can find this radio station on Facebook: https://www.facebook.com/radiocantautoroaxaca/

Coughing and without a mask, he went to a party. Now...

Is the Los Angeles police identifying gang members as youth who...