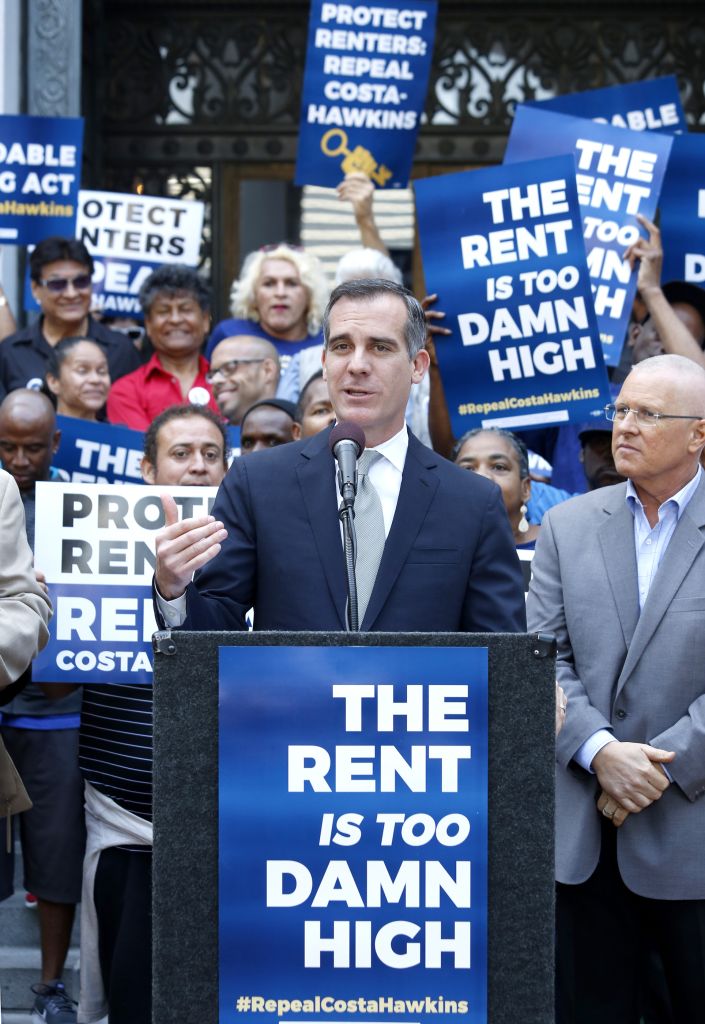 04/23/18 / LOS ANGELES / Los Angeles Mayor Eric Garcetti and Councilmember Mike Bonin joined housing advocates, labor leaders and community activists during a press conference outside Los Angeles City Hall in support of the Affordable Housing Act, which would repeal the Hawkins Coast Rental Housing Act of 1995. The advocates announced the submission of over 565,000 voter signatures throughout the 58 counties in California to place the Affordable Housing Act on the statewide November ballot.Ê (Photo by Aurelia Ventura / La Opinion)

The Los Angeles Council approved a new law that prevents builders with real estate projects that require a vote of the councilors, can give political contributions to candidates for municipal positions.

“From the first day I took office, this is legislation that I believe in, and for which I have fought,” says Councilman David Ryu who for four years tried to pass a municipal law to reform electoral finances.

“Today we have taken a crucial step. There is nothing more fundamental than trust in our democracy, and today we are laying the groundwork for the municipality to work for the people, ”he says.

The campaign finance reform was one of the first bills that Councilman Ruy tried to present in 2015 when he arrived at the Council.

In the first stage, it was intended that donations be prohibited even from unions, political parties and groups, and only leave those of individuals. But the measure was completely unpopular among the councilors, and did not get a single vote.

In 2018, it presented similar legislation. The difference with the ordinance passed this week, introduced in January of this year, is that it was supported by the City Ethics Commission.

"It's a bittersweet victory because Councilor Ryu would have wanted a much stronger law. Therefore, recognize that it is not perfect, but it is worse not to do anything. This municipal law is only a first step towards a broader reform for which he will continue to fight, ”says Mark Pampanin, spokesman for Ryu.

It will also give people the assurance that the construction projects that are voted for their neighborhoods, respond to a need, and not because the corresponding councilor received a bulky check in donations from the builder, indicates.

“We must recognize that there is a lot of distrust among the Angels towards the Council. There is a perception of corruption. With this law, we are going to make sure that no real estate project is tied to a political contribution, ”he remarks.

Ryu did not receive donations from builders with businesses with the City when he competed for the position in 2015.

Kathay Feng, director of the Common Cause organization saw the ban established by the Los Angeles Council as very positive. "Open the field so that more people can participate for a public position in the Mayor's Office," he said.

And he explained that what happens is that the builders or groups that give money to the Council candidates receive more attention and more careful consideration in return.

“By human nature, we tend to be friendlier to those who give us a generous amount for a cause. Those donors gain special access. Now that these donations make politicians change their decisions on important issues, it's hard to know”, He observes.

But the new law considers that it comes at a time when many real estate projects of accessible housing in the City are carried out. So, says Feng, it responds to a need.

The ban on political contributions from real estate developers who do business with the City of Los Angeles will enter into force for the general election of the year 2022. It will apply to the candidates for the Council, the Mayor's Office, the City Attorney and the Municipal Comptroller.

Why is Madison WI the best place to live?

How much money do you need to live comfortably in Corpus...

Who is the principal in a single agency relationship?