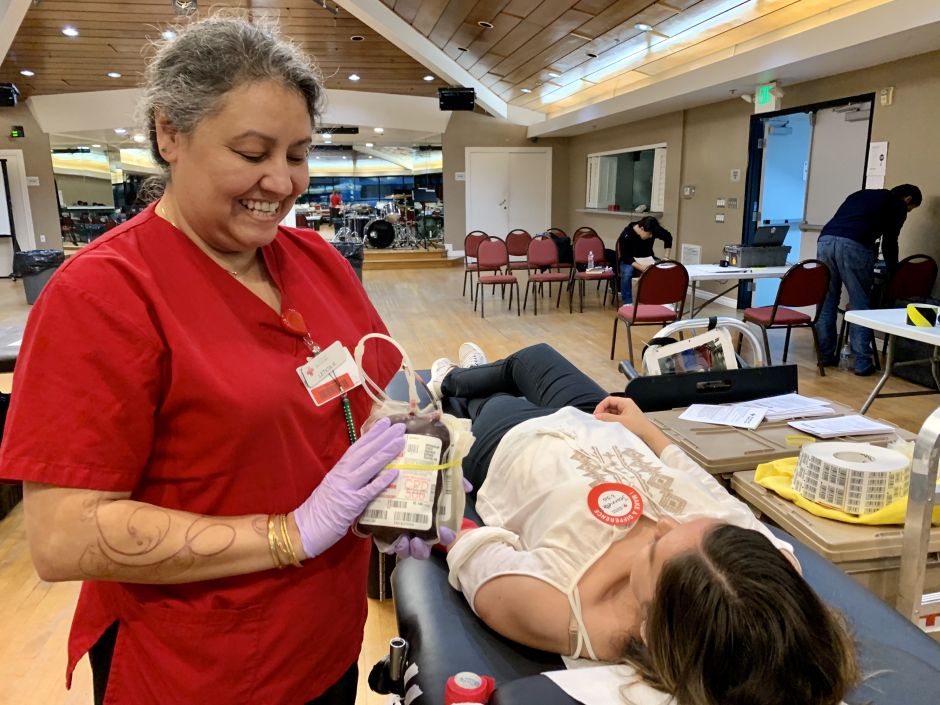 Jeannette Díaz decided to donate blood when she learned from the news that there is acute shortage in hospitals in southern California. But It is not the first time he is a donor but the third time.

“When I was in school I donated at 18 and 19 years old. Now I am 29 years old, and this is the third time I donate. I hope I can help save a life, ”says this young woman, the daughter of Mexican immigrants who works as a graphic designer, and lives in Whittier, California.

Jeannette made an urgent call to Latinos to be encouraged to donate blood. "Its for a good cause. Please do it! I grew up in a house with parents who were afraid to donate, but this is nothing to scare. It is only a picket, and the extraction takes about six minutes. The only recommendation is not to carry heavy things, not to exercise vigorously and drink an extra quarter of water in the next 24 hours after donation.", He says.

In the last 50 years, it has already become customary in January to celebrate the National Blood Donation Month, which coincides with one of the times in which hospitals suffer from lack of supply.

“During the year we have two critical periods of scarcity, at the beginning of the year and summer. In this season we begin to notice the lack since Thanksgiving because many people do not donate these days to walk at parties; and at the same time, accidents, murders and emergencies increase, ”says Roberto Torres, field manager of the Red Cross in Los Angeles.

Which are the requirements?

“It's very simple to donate. It can be done from the age of 16 with the consent of the parents and up to 100 years. It is not a matter of age but of a good state of health. Last year, an 87-year-old man who was very healthy donated blood, ”explains Roberto.

Who can not donate?

“If you have a cold or are sick with a cough, you can't do it. You have to be healthy and feel good. People with AIDS and syphilis cannot donate. Foreigners, or those who have recently traveled abroad and visited places where there is malaria either. You have to check the list of Mexican states and countries with restrictions on the Red Cross website, ”he says.

Roberto observes that there are many myths about what can happen when someone donates.

"Those who have a tattoo or have had a body piercing to put on an earring, a ring, etc., can donate the same day as long as they have done those jobs in a state-regulated place," he emphasizes.

But if the tattoo or the call piercing in the body you did it yourself and reused a syringe, you must wait a year to donate, indicates.

He also says that it is not true that diabetics cannot donate. "If they are healthy, they can do it," he observes.

Before donation, people who want to donate have to answer a rigorous questionnaire, which determines whether they qualify to be donors.

Another great myth is that people gain or gain weight after donating blood.

"It is completely false. Do not get fat. On the contrary, donating blood helps us to detoxify ourselves. In the next 52 days you produce new blood again”, Says Yuri Casco who donates blood since the age of 16. He is currently 38 years old. “The only years I have not donated was when I left the country to Africa, and the year I got pregnant and was a mother. In those cases, one must wait a while, ”he observes.

Yuri says she donates blood motivated to save a life. He became even more aware when his father cut his tongue during an epileptic seizure and needed an urgent transfusion.

“The doctor told us that if they had not donated his blood, he would have lost his life. They donated 14 units of blood, like three bottles of blood, ”he says.

"You never know when you may need a blood donation," he observes.

Like Jeannette, Yuri asks Latinos not to be afraid of being donors. "I feel normal after donating blood. Once I passed out, but because I hadn't had breakfast and had a lot of coffee. That day before donating blood, they should make their meals on a regular basis, ”recommends Yuri who works in a hospital, and daily sees the need for blood transfusions.

He also likes to donate because he sets the example for his son. “I teach him that it is good to give someone who is going through an emergency situation; and it is always better to give than to receive, ”says this mother who rose as if nothing from the stretcher where she was laid to donate blood.

The blood donation is equivalent to a pint, which is the size of a small bottle of water, and serves to save three lives. There are people who can donate two pints, but they have to meet higher requirements.

Either way, all the blood collected is examined in laboratories to determine that it is in good condition and free of infections. Once assessed, it is sent to hospitals.

Roberto Torres of the Red Cross comments that the type of blood that is most in demand is the negative O, followed by the positive O, then the A, and fourthly the combined B and AB.

"Six out of ten Latinos have blood type O”, He observes.

And he emphasizes that if we all donated twice a year, we would not have a shortage of blood. Our hospitals are at the top of the demand, ”he says.

Roberto says undocumented immigrants can also donate. “The only thing they need to bring at the time of donation is an identification that contains their picture and name. It can be the passport of their countries of origin or a consular registration, ”he observes.

With the consent of his mother, Abdías Toledo, 17, a high school student, came to donate blood.

Verónica Jiménez Kaiser, says that her son has already donated other times, and that he decided to be a donor.

All those who have donated blood between January 1 and 19 of this year, automatically enter a raffle to attend the Super Bowl that is held this year in Miami. In addition, the winner will have the right to take another person to the game. It has included the round plane trip, three nights at a beachfront resort and a 500 pesos card to spend on whatever you want.

If you want to have more details of the requirements needed to donate blood, visit the Red Cross page

Announce closure of the legendary MillerCoors brewery in Irwindale, California

Ridley-Thomas: Homelessness, the other crisis in Los Angeles

French-language cinema on display at the Raymond Kabbaz Theater in March...