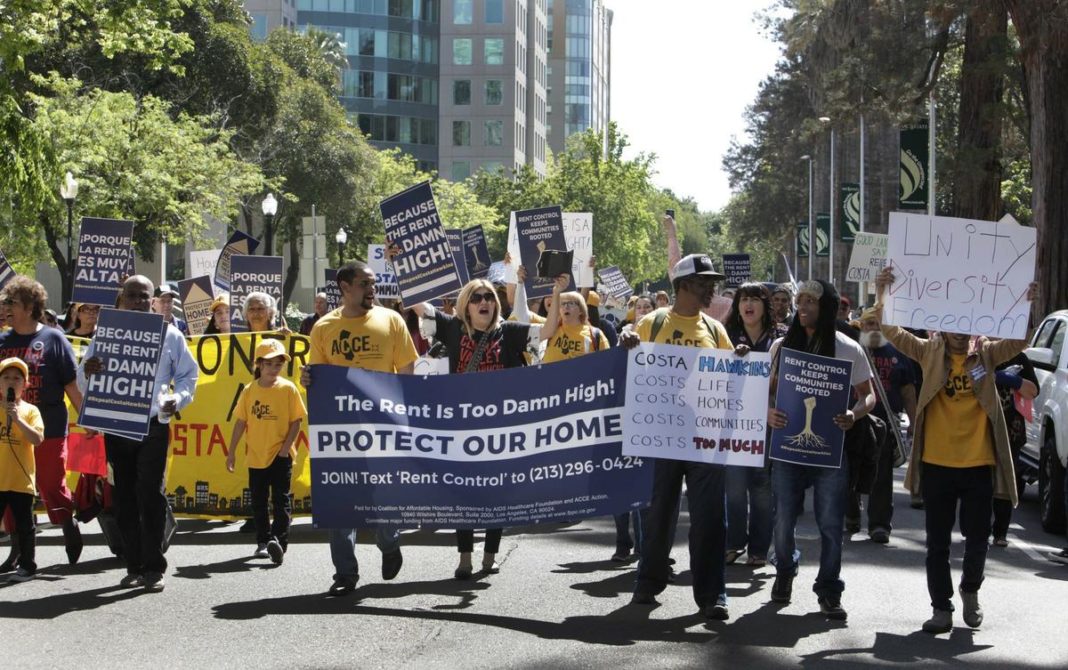 With the economy unbound and unemployment existing during the pandemic, thousands struggle to raise their rent money

María Luisa Arámburu, 79, who must wear a prosthetic leg, tries to maintain her home on H Street in Chula Vista, California, but her only daughter, who is her support, has been unemployed since March for the pandemic.

“I would like you to touch your heart. I have lived 27 years in this apartment and I never had a problem, but nobody knew how the problem of the pandemic would affect us. My daughter without a job and I have no pension to pay, “he said.

An organization has tried to support her so that the woman, who is a Mexican immigrant, remains in that place during the health crisis.

Aramburú is one of thousands of San Diego County residents who lack the resources to pay the rent they covered on time before the pandemic hit.

The health contingency put some 430,000 workers out of work in San Diego, according to official estimates.

So today a city councilor in California is proposing a moratorium to prevent evictions in San Diego from lasting a year.

The plan could even expand San Diego funds to help tenants in the worst circumstances.

The president of the city of San Diego government council, Georgette Gómez, presented this Tuesday a proposal to extend the moratorium on home and business evictions until March 31, 2021.

The official argued that the economy is still unable to rebound due to the pandemic, that unemployment remains high and that additional aid that the federal government provided to the unemployed is about to end.

“When we initially approved the moratorium on evictions in March, we expected six months to be enough for tenants and small businesses to recover from the economic effects of COVID-19,” said the councilor.

The city of San Diego also hoped that the federal government would provide enough relief to hundreds of thousands of people who had lost their jobs.

But “unfortunately the pandemic does not decrease, unemployment remains high, many companies remain in trouble, and the federal government’s response has been woefully inadequate,” city council member Gómez said in written comments.

He said it is “critical” to extend the term of the moratorium and give more relief to San Diego residents due to the health emergency.

If approved, the proposal, which is expected to pass by a majority in the San Diego city council, the moratorium in the county would go from March 2020 to March 2021.

It is eight more months from this next month end to give the Sandieguinos time and opportunity to recover from the economic damage that the pandemic has caused.

The moratorium was already extended last month and is in effect until the end of September. In June, the enlargement barely got a majority of votes, passing with five in favor and four against.

The current moratorium prevents landlords from evicting tenants and small businesses that are unable to cover their rent or lease payments due to financial difficulties caused by the pandemic, is slated to expire on September 30.

This time, although the proposal sounds more ambitious, Georgette Gómez hopes that the argument that additional aid to the unemployed is to end this week, will contribute to his plan being approved.

“Between rising unemployment and the end of the weekly federal unemployment benefit [que era un bono] At $ 600, Sandieguins should have more leeway to make their rent payments, “even those who are behind schedule, he said.

“The impact of the pandemic has not yet diminished enough to justify lifting the moratorium this fall,” said Gomez.

A problem that has become apparent

The county government approved funds of $ 15.1 million in tenant relief and nearly $ 19 million in assistance for small businesses with monthly rent arrears.

The Californians Alliance for Community Empowerment Action (ACCE), an association that defends tenants in California, ensures that inequity and injustice in housing has already impacted for more than a decade and has been exposed with the pandemic.

José López, an organizer with the alliance, said that “there are wealthy people in California who are spared the ravages of the pandemic by paying less than their fair share.”

“We wanted to make sure that if we can’t be comfortable, that they don’t feel comfortable, either,” Lopez said.

He added that when the communities that least feel the impact of the pandemic in San Diego understand that general housing stability is needed, then they can collaborate with those most in need.

ACCE is one of the organizations that will present the main arguments in favor of extending the rent moratorium until March of next year.

Hispanic signs the advancement of the coronavirus in Los Angeles

Psychologists on wheels: therapy for migrants arrives in a van

Firefighters advance to 62% containment of the Los Angeles Bobcat Fire