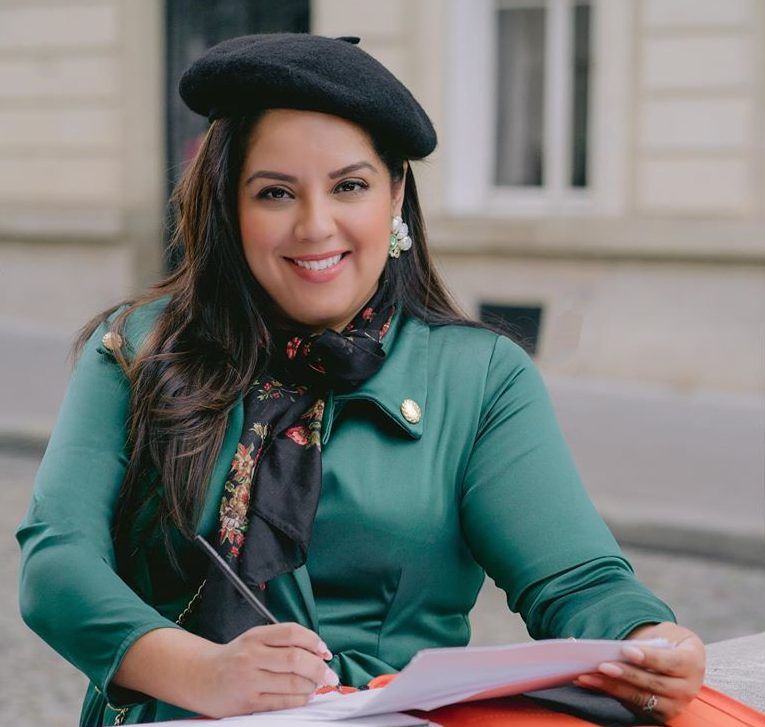 Johana Hernández feels she is dreaming. You can't believe that you just opened a shop with your own couture designs in the city of Beverly Hills.

"I feel very happy. My dream was to have my store and the opportunity has come at the perfect time. The city of Beverly Hills has welcomed me with open arms, ”says this 33-year-old young Hispanic woman, who specializes in the design of haute couture dresses and brides.

His parents are immigrants from El Salvador. They came to Los Angeles more than 40 years ago.

The taste for design comes to Johana since she saw her parents work in the sewing factories in Los Angeles that sewed for well-known brands in the market such as Guess, Gap or Calvin Klein. "My aunts also sewed," he says.

Johana explains that he likes fashion because it allows people to fix themselves in different ways.

"I have a lot of passion for design. I love how it helps you transform", Explain.

This young fashion designer was born in Compton, but went to Downey High School where she graduated in 2004. Recently her name was placed in the Downey High School Hall of Fame as a tribute to her achievements at such an early age. He went to fashion school at the Institute of Design and Marketing (FIDM) in Los Angeles.

“I started studying design at age 18; At 19 I found my first job as a leading designer, and my first collection was presented by the Wall Street Journal; at 24 I opened my own company Glaudi by Johana Hernández, ”he says. But he has also designed for brands with Isaac Mizrahi Jeans, Eli Tahari, Hanna Montana license and Disney License, among others.

He decided to put his Glaudi shop in honor of his mother named Gladis. The store in Downey is located at 8808 Imperial Hwy. "Four years ago I opened it," he says.

Johana says that the fashion business for her is not only a matter of vanity but an opportunity to help others.

“At 24, I launched my collection to raise funds for the children of Mexico and El Salvador,” he says.

But it has also gone to him that among his client portfolio there are several Latin artists such as Gloria Trevi, Natalia Jiménez, Anahí, Rossy Rivera, María Conchita, Lucero, Alejandra Espinoza, among others.

She is also delighted because she is the designer of the queen of the beauty contest in El Salvador, Zuleyka Soler who will represent her parents' country in Miss Universe 2019.

“Águeda López – the Spanish model wife of singer Luis Fonsi – is the image of my brand,” he explains.

Her parents José Reynaldo Hernández and Gladis Hernández, she says, feel very proud of her.

"I thought they were going to be scared when I told them that I was going to open a second store in Beverly Hills, but they believe in me and the community is very supportive," he says.

Johana has two brothers. One of 31 years and another of 35 years.

One of his greatest inspirations is his grandmother whom he never met and who died of cancer.

“She inspires me to keep going. And I feel very blessed to work in my passion and to come from a humble place. I am the only Latina in many fashion events. For many designers, fashion design is a hobby for me, it's a career, ”he says.

Johana was the first Salvadoran in Paris Fashion Week this year.

Define your style as modern, elegant, fresh and feminine. Their prices are not completely unattainable. “Wedding and quinceanera dresses cost $ 2,500 up; and those of party from 600 dollars ”, precise.

"My designs are tailored to customers," he says.

Johana believes that his success is due to his passion for design and that he puts his heart into his work.

“Everything has been very natural. I love what I do, and I give great importance to the details. I like that my designs are unforgettable, ”he says.

And he confesses Christian and believer. “I do everything with a purpose and I always try to help other people. For example, we give graduation dresses for girls who don't have money, ”he observes.

The Glaudi store in Beverly Hills is located in the heart of the sophisticated city, one block from the famous Rodeo Avenue at 9608 Brighton Way, zip code 90210.

“The work is done in Los Angeles and in Turkey. In this last country because there they do a lot of embroidery work, ”he says.

In 2014 she was nominated by People magazine in Spanish as one of the 25 most powerful women; while Latina Magazine named her among the 30 favorite stars under 30.

If you want to know more about Johana's work, visit his site: www.glaudicolection.com You can contact her at info@glaudicollection.com

His gyms closed, he embarks on medical outfits