Home Latest News Evita Dubon, the only ambassador of Guatemalan folklore in L.A. 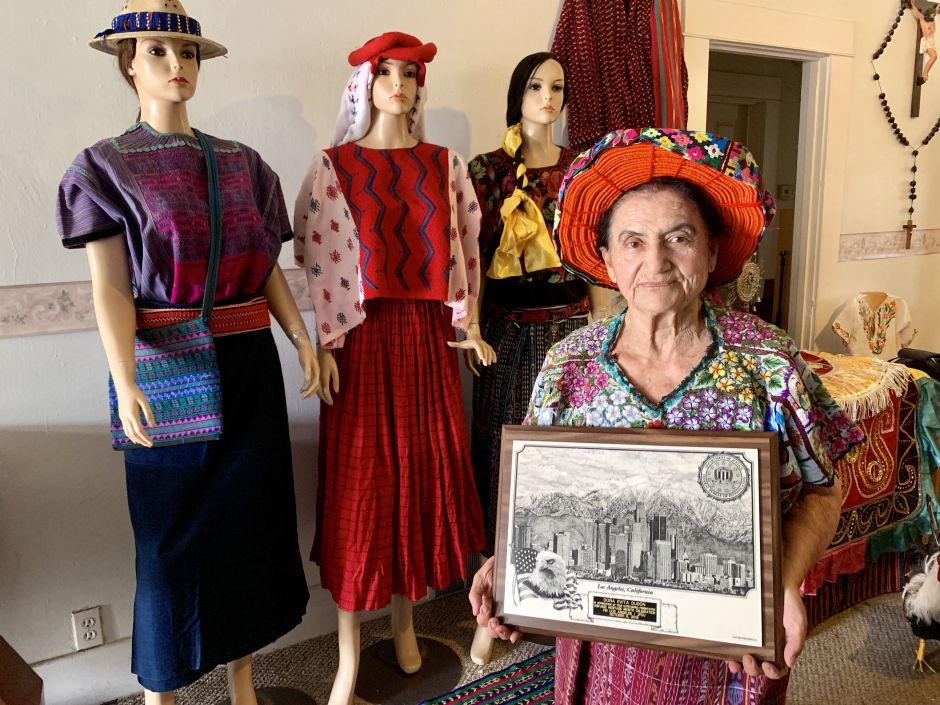 At 85, Evita Dubon has energy for a while since it hurts nothing and she enjoys good health. This octogenarian gives herself the luxury of dancing, teaching the dances of her native Guatemala to the members of the folkloric ballet “Mi Bella Guatemala” – which she founded more than 20 years ago – and making presentations wherever she is invited.

Since he arrived in Los Angeles at age 51, he has been dedicated to promoting the culture of Guatemala, has many traditional costumes of his country and an extensive collection of traditional crafts and objects. In fact, he has set up a small museum in his home in western Los Angeles dedicated to honoring his homeland.

"All this makes me not feel far from Guatemala”, Says this tireless Guatemalan immigrant.

Mother of seven children, six of whom are Silvia, Miriam Virginia, Vilma, Estuardo, Sandra and Eric. Evita came to the angel city when her children were already adults. Here in the United States are two of his children.

“I could come before, but I didn't do it because when you leave the very young children to come to work in the United States, then they claim it,” he says.

His first job when he finally emigrated to Los Angeles was as a babysitter in a house. “Before hiring me, my future employer asked me what my experience was. I told him, because I just raised seven children, my own children, ”he recalls answering.

“I took care of a girl until she was three years old. I took better care of her than if she were my own daughter. I have always thought that with the alien, one has to be more careful. He also cleaned the whole house and made food. He rested one day a week. When they told me they were going to have another child, I quit. It was too much work. One more day I was still there, I was going to get old overnight, how tired I was, ”he says.

From there he went to work at a hotel for the elderly. ”They also exploited me there because I was taking the turn of the people who were the owners of the work. They paid me a share of what they owed without working. There I hurt my vertebrae when carrying sick elders, ”he says.

Evita became a legal resident in 2002. In 2009 she became a citizen of the United States.

But almost since he emigrated, he joined the Association of Guatemalan Fraternities as responsible for culture. "At that time there were more than 50 fraternities," he says.

In Guatemala she had graduated as a physical education teacher at the School of Physical Education. He also studied Crafts and Beauty at the Metropolitan Municipal School of his native Guatemala.

So with her background as a physical education teacher and knowledgeable about the crafts of her homeland, the dance was natural.

“When I was in the Association of Guatemalan Fraternities, it was a requirement that we present a dance. It all started there, ”he remembers.

For more than ten years he was part of the Guatemalan folkloric ballet Ranima Binek and gave a lot of enhancement when doing the choreographies and buying costumes. In 1998, he created the folkloric ballet "Mi Bella Guatemala".

But she is not happy to present herself in different scenarios of California and Nevada, in universities, schools, colleges, libraries, cities, fairs, theaters, parades and wherever they invite her, over the years she was given the task of collecting handicrafts and typical objects from Guatemala. He also began to buy costumes and clothes typical of the various regions of his homeland.

“Here I got a marimba. I found her a garage all ruined and broken. I rebuilt it, ”he says.

The handmade pieces and clothes have brought her throughout the years in her travels in Guatemala. Evita has even a few rain sticks, a kind of long traditional wooden pipes that, when moving, resemble the noise of the rain when it falls.

“I feel very happy to be a promoter of Guatemalan culture. That gives me life and a lot of desire to live. My ballet “Mi Bella Guatemala” is presented all year. We go where they invite us, ”says this mother and grandmother, proud to be 100% chapina and to take Guatemala in the heart.

For Evita, Hispanic Month is very important because it reminds her that the independence of Guatemala took place in peace.

“I ask Guatemalans who live in this country to preserve their culture, their roots; and teach your children the culture and traditions of the country, ”he says.

In the summer of 2012, Evita was recognized as a Distinguished Citizen by the Guatemalan Week Committee proclaimed by Los Angeles County since 2002.

Seven short films on the big screen of the TRK during...

Starbucks apologizes after two Riverside sheriffs complained that they were not...