Home Latest News Chef Amateco: Opens his own restaurant and leaves the days behind homelessness 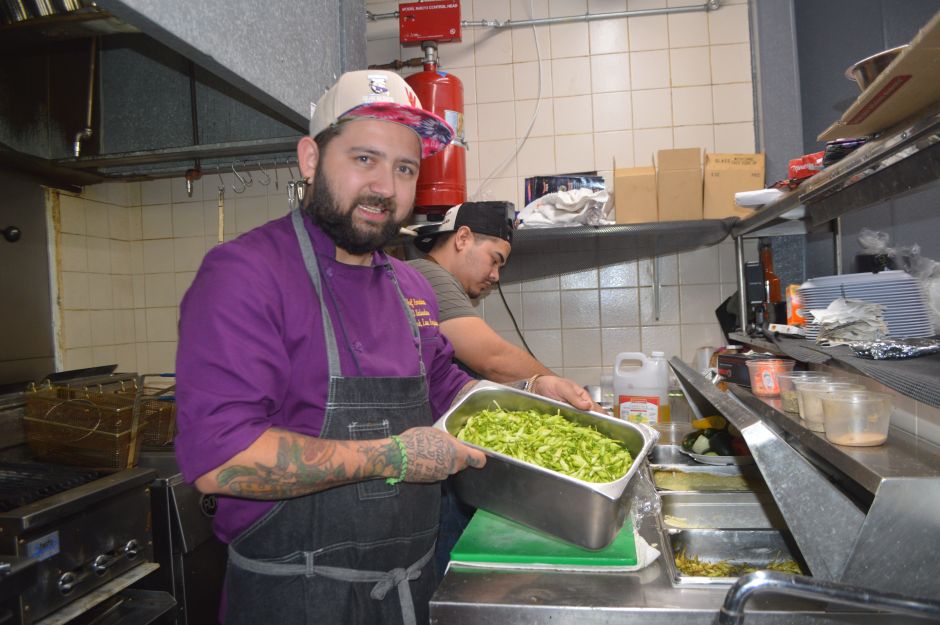 Salvadoran Wilbert Martínez is an immigrant who faces his battles

With a very peculiar style, ranging from his colorful uniforms to a cap of his own brand, Wilbert Martínez enjoys the success of his restaurant ‘Mariscos El Amateco’.

Gone are the days when I had to collect cans to buy food and sleep under a bridge.

Chef Amateco, as he is known for being a native of Llano del Amate in El Salvador, has gained popularity since 2015 when he created the famous loroco pizza.

This flower is typical of Cusco food and the creation of this dish, opened the doors to fulfill his dream of becoming an entrepreneur.

To achieve this, the 32-year-old Central American has had to pass several tests.

He lived for 19 days in "The Beast" —a freight train that not only transports supplies along the roads of Mexico but also migrants seeking to reach the United States. He walked another 24 days in the desert to reach New York, where he first established himself as a dishwasher and then as a cook in a Colombian restaurant.

However, his desire to overcome it brought him to the city of Los Angeles, where he lived the darkest hours of his history.

“The person I had come to live with took me out of his house. I ran out of money and then I had nothing left but to live on the street, ”says Martínez, who remembers what he had to live like a homeless man.

From that moment, the purple color marked his life.

When he woke up from his first night as helpless he realized that a person had sheltered him with a blanket of that color. Therefore, he uses it in his uniforms and in the decoration of his restaurant.

Thanks to an acquaintance he managed to leave his life in the streets and was reunited with his great passion: cooking.

“It was a dishwasher, I cleaned bathrooms and I had to start over again. I took it as an exam that God wanted me to pass, but I had come to Los Angeles to grow up not to continue working for others, so it was when I invented the parrot pizza, ”says the chef.

Luck smiled at him at the 2015 Salvadoran Fair when a person became interested in his parrot pizza and offered him a partnership in which they began an important distribution of his dish in southern California and in Las Vegas, Nevada.

The pillar of his life

With his pizza business on track, Wilbert saw the perfect opportunity to open his restaurant El Amateco 1 in the city of Compton and, a few months later, El Amateco 2 in Van Nuys.
However, after six months he was forced to abandon his dream.

“Closing my restaurant was painful, it was my baby. Then we opened the restaurant of the Valley and the two restaurants are lost, it was an economic and emotional loss because I lost many friends, ”he acknowledges.

In the midst of that painful moment, Chef Amateco met his wife, Wendy Martínez, who says he has become the compass he needed to fulfill all his dreams and openly and successfully open Seafood El Amateco, about 14540 Vanowen Street, in Van Nuys.

“In six months the two restaurants close, but at that moment I know my wife, who begins to guide me. I needed someone to help me execute my dreams and she was the one who helped me, ”he says excitedly.

"Maricos El Amateco is amazing, God gave me a restaurant twice as big as the two that I had to close."

The success of Chef Amateco is reflected in the wide range of products of his brand that range from tanned, spicy sauces, caps and very soon a line of his striking uniforms.

"The Amateco is already a registered trademark, where we put it works," he says.

For next year, El Salvador has two major projects at the door. The first is the opening of his second restaurant, Kachimbon & Beer and the publication of an autobiography.

Chef Amateco revealed that in his book he will tell about his life but that above all you will narrate his experiences when crossing the desert before arriving in the United States.

Wilbert has overcome obstacles, has gone cold, hungry and indicates knowing what failure is, but has never lowered his arms and kept fighting for his dreams.

Chef Amateco has created the Foundation Missionaries on Foot, through which once a month he delivers food to the homeless.

"Only those who have already been through it can understand what a hot plate means," he says.

Success story: the French SKEEPERS displays its ambitions in the United...

In the United States, the film “Mignonnes” never ceases to annoy...