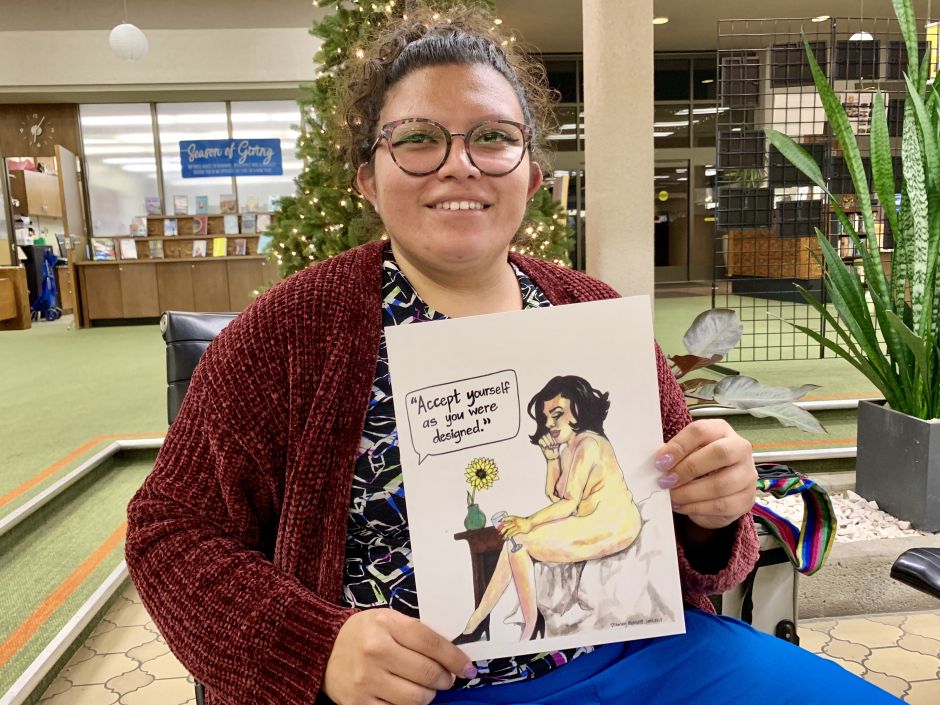 Young artist breaks through with his talent, denounces abuse and tries to increase women's self-esteem

Since Shirley Alonso was able to access a pencil and paper, he discovered that he was given the drawing. When she was in sixth grade, between the ages of 10 and 11, a teacher discovered her skills and motivated her to develop her full potential. At 27, she is an artist with a mission: to make women of all sizes love themselves.

But also through his illustrations he denounces the abuses against immigrants, gives value to dreamers and dares to say what many women keep silent.

"My art is the thoughts that many consider taboo to talk about them, but we must motivate self-esteem and dignity among people who resemble us," he says.

Shirley is the daughter of Nicaraguan immigrant parents. He lived until he was eight in the historic neighborhood of Boyle Heights. Hence his family went to Pasadena, where he lives today.

“When I was in high school it was when I learned more techniques to draw faces. I realized that it could be done, ”he says.

She was raised by her maternal grandparents because her parents were always working. She is a graduate in graphic design and communication from Notre Dame University in Belmont, California. He currently works with special children for the Pasadena School District.

“My dream is to be able to live completely from my art, and that my own graphic design business allows me to pay my bills,” he adds.

Through her work with special children, Shirley became aware that she was always motivating them to follow her dreams and her passion, but she was not chasing her own. "I had to follow my own advice, and show my own talents to the world."

This is how he decided that after his work in the Pasadena School District, he would take advantage of any free time to start creating his illustrations with cause.

He has put his design business Art Kid Shirley. “When I was in school, they called me Art Kid (girl artist in Spanish). I want to keep that artist girl inside me. ”

For her, her art is her "silly" humor, what she is and what she is trying to become, but also her therapy, her freedom and escape from reality.

“I draw the old woman. First I do my work in pencil or with marker, and then digital coloring, ”he says. However, there are some that paints in oil.

His artistic work always carries a message. Like the one dedicated to President Trump and the Migration and Customs Service (ICE): “Danger. The President and ICE in the area. Keep your children away. Attacks can cause injuries or deaths. ”

But seek respect for women. In one of his illustrations it is observed: “Women can be found in this area. Keep your distance and respect them. ”

This artist and designer wants women to have confidence in themselves and not seek validation for their body and beauty; also stresses that each stretch mark should be celebrated because that is part of being human, he says. "Accept yourself as you were designed," says one of his most beautiful illustrations.

Shirley's art is motivated by his own life. “I was very quiet and shy. My art has been my voice because through it you can say many things. ”

Many of his illustrations contain the phrases that his grandmother repeated when he was growing up. One of them, very popular among the Latino culture: “before dead than simple”, which refers to women always having to be well groomed. In other words, it is better to die than to appear in public without a good presentation.

Other phrases with which he grew up listening at home and now using, are: "Foolish with desire"; "Tremendous"; “Seeing and not touching is called respecting”; “Pinolera (a word used to call Nicaraguans).

For a long time she herself suffered from low self-esteem and felt blocked as an artist, but "I regained my confidence through my humorous works that have helped me deal with my own demons, which many people enjoy."

Shirley sells his work at events or cultural festivals.

“I feel very proud of what I have achieved so far,” he says. Although he recognizes that selling his art has been his greatest challenge.

He offers cards with his illustrations, stickers and makes some cartoons that attract a lot of attention.

“My art seeks to provoke a conversation not to look away. It's about what our mothers and aunts were ashamed to talk about. And I suppose, if my art likes and annoys people, it's that I'm not such a bad artist, ”says Shirley.

“The coronavirus ruined my year of study in the United States”

Have you already made the marketa? They will distribute free toys...

‘El Salvador, great as its people’ gives a taste of its...