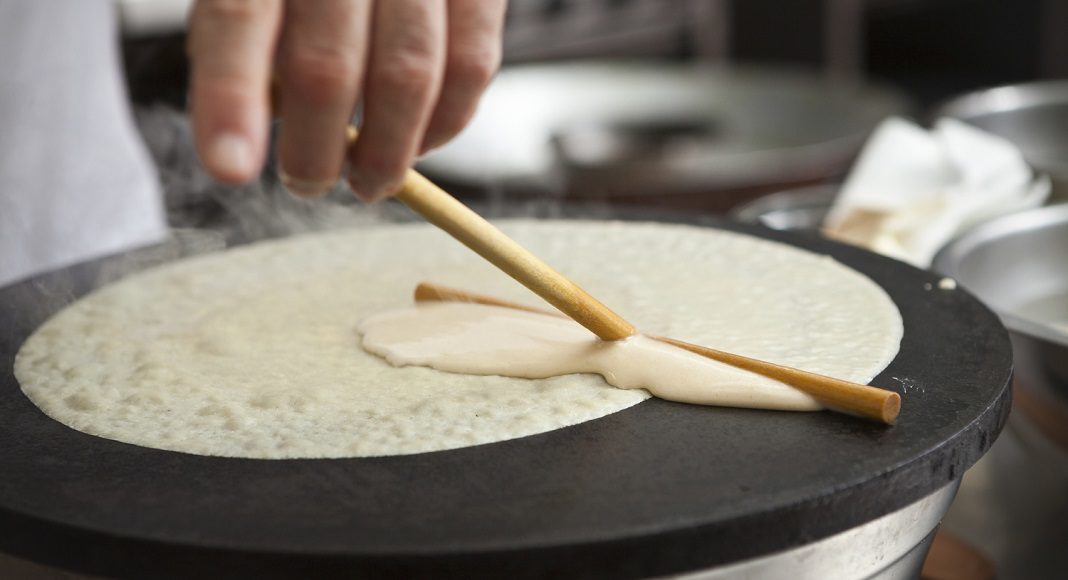 Sunday February 2 is not just Super Bowl day. While some will go and find the best crêperies in their city to celebrate the candlestick as it should be, others will try to make their pancakes as a family. French Morning asked French chefs based in the United States their secrets for a successful homemade pancake.

Gilles Renusson, an instructor at the Secchia Institute for Culinary Education in Grand Rapids, Michigan, remembers the recipe by heart. “50 years ago, I entered a hotel as an apprentice, and I had to learn about fifty recipes by heart, including that of pancake batter”. Immediately, the chef recites the recipe he knows on the tip of his fingers. "Iyou need a liter of milk, 400 grams of flour, 7 eggs, 50 grams of butter and sugar and half a teaspoon of salt ”.

He recalls that "The pan should not be too hot, it is essential for good cooking". Her little secret for adding butter to the mix? "You have to let it brown a little, and add it immediately to the dough and stir well, and then put the dough in the fridge the day before cooking." The French chef says that we can add "of Grand Marinier or cognac ”.

For Romain Cornu, pastry chef for the Hakkasan Group in Las Vegas, “the most important is butter. I use Irish salted butter, it's the top butter in the United States. It gives more taste.”Another technique, which makes the dough lighter, “Is to beat the whites before adding them to the rest of the dough". And for all his pastries, Romain Cornu confides that he takes exclusively “Fleur de sel". And for milk, “Organic milk, which has more fat, is also the best".

Whereas for Jean-Claude Perennou, pastry chef at Cannelle Lic, in New York, "The most important is the flour, I take the" King Arthur "which is a good quality". This Breton recalls that “what you have to remember is that you have to let the dough rest for at least 4 hours, it made it less elastic ” so that the flour starch can swell. And once the pancake is ready, he says, “for sweet pancakes, the winning combo is banana, nutella with a scoop of ice cream".

The problem that we often encounter is the lumps that form in the dough. Yannick Dumonceau, originally from Lyon and pastry chef at ONE65 San Francisco, gives his little secret: “You have to pour lukewarm milk to avoid lumps”. Her hint of love: a drop of rum or orange blossom to give the pancake a different taste.

Elodie Pouliquen-Darmon, from La Chouquette in Los Angeles, says that "My secret is lager!". This Parisian, of Breton origin, moved to Los Angeles three years ago to open the pastry shop, La Chouquette. "The most important thing for me is the butter, I take the Breton butter found in Trader Joe ”. For the tasting phase, she likes to stay “simple". "I put sugar and lemon juice, it's delicious!”, She explains.

Sautéing the pancake isn't just for impressing American friends. "If you hold a coin in your left hand and blow the pancake with your right hand, it will bring prosperity!", recalls Gilles Renusson. To your stoves!

Elodie Vidal: “I would like to put art back at the heart of our societies”

The pandemic puts students in check