Home Latest News Activists and children ask for toys and not detention centers on Three... 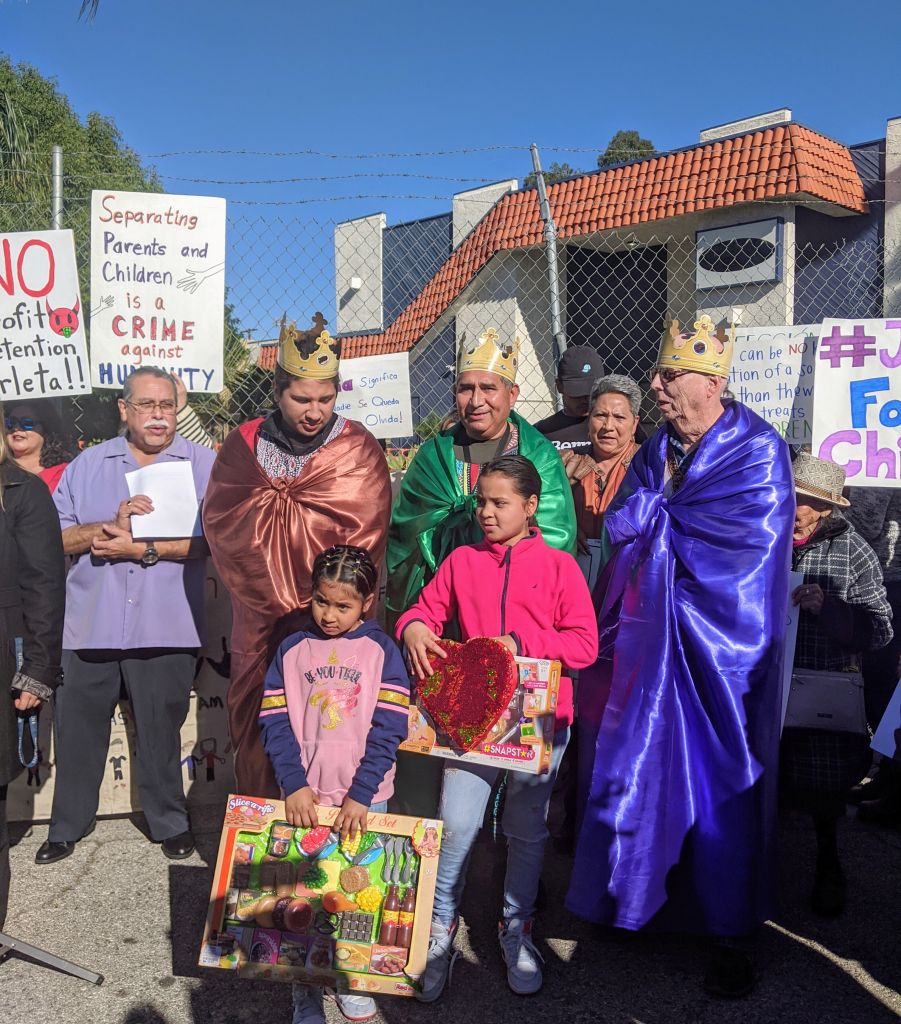 In many parts of the world, on January 6, the three wise men arrived at the children's homes to bring them toys. This is a Catholic tradition in honor of the kings Melchor, Gaspar and Baltazar, who supposedly guided by the star of Bethlehem reached the baby Jesus and presented him with gold, frankincense and myrrh for his birth.

However, while some little ones celebrated this family tradition, others advocated the release of those who remain locked up in detention centers throughout the United States.

They were the little sisters Iris Barrios, 9, and Britany Barrios, 6, who arrived with their grandmother Mayra Todd to protest against the construction of a juvenile detention center in the city of Arleta, in the San Valley Fernando

The town is currently vacant and fenced with wire fence and not to transfer ads.

At their young age, and due to their own experiences, the girls asked for “schools instead of prisons” for many other boys who, without having caused any crime, are imprisoned for days or even months.

Iris and Britany arrived as refugees with their parents from their native Guatemala. The girls spent eight and 16 days in a detention center in Houston, Texas until they were released to fight their case from outside.

With very few words, Irais said that they slept on the floor and covered themselves with aluminum foil. The girl said it was a very unpleasant experience.

“They treated me a little well but other children were not treated well, they were picked up at 6 in the morning to eat,” Iris said Monday at a press conference. “We don't want (children) to be in jail because children die there sometimes. It is better schools not arrests. ”

The event held in Arleta was organized by the Justice Coalition for Immigrant Children to request that the possibility of creating a child detention center at the VisionQuest facility, located at 9120 Woodman Avenue, near Nordhoff Street be canceled.

Last year, this company received more than $ 25 million in grants, divided over a three-year period, to create and supervise juvenile detention centers in Texas, Arizona, New Mexico and California.

VisionQuest identifies itself as an entity that provides intervention and treatment programs to at-risk minors worldwide. However, monetary support was granted without even having secured the locations where the juvenile detention centers will be.

"VisionQuest has been exposed for having abusive staff who take care of their campuses and have also been reported that staff members have hanged, slapped, hurt and promised to make a 'living hell' for migrant children, according to the Philadelphia Inquirer," said Jorge Boches, LAUSD teacher and instructor of the Aztec group Kalpulli Teotlalli Tepeyolntl.

“They were almost bankrupt and now they are using this method to make millions behind the backs of our migrant children. That is something we are not going to support, ”said the teacher.

Sports coach Luis Millanao said that in his experience of so many years in the area, he can see how green spaces are needed for children to perform physical activities.

He said he considers it crazy that while they are charged huge amounts to rent a field, the government spends millions of dollars in detention centers for children.

“I don't think it's the right thing for the United States to make prisons for children. It is not good for humanity, ”he said.

Activist Gloria Saucedo said the community is upset because her own taxes are being spent on something that will cause psychological problems in youth.

"It is incredible that gifts are being given today worldwide and what is being given here is a detention center for children," said the activist.

The president of the Los Angeles City Council and representative of the CD-6 that includes Arleta, Nury Martínez, said in a statement that as the daughter of immigrants she strongly opposes the creation of that detention center.

“Some call them detention facilities or detention centers. I call them prisons, ”Martínez said. “You should not benefit from the anguish of children. That does not take place in Arleta or anywhere else in the city of Los Angeles. ”

Councilwoman Martinez filed a motion on November 15, 2019 to ask the Department of Planning and Construction and Security to identify whether a detention center can be built in that location.

The Opinion tried to get a comment from VisionQuest but at the end of the article there was no response.

Proposition 187 has not lost relevance

Frédéric Jung, Consul of France in San Francisco: “I want to...

Four young talents of classical music in concert at the Consulate