Home News & Politics With a first opening in LA, Lab Five dreams of being an... 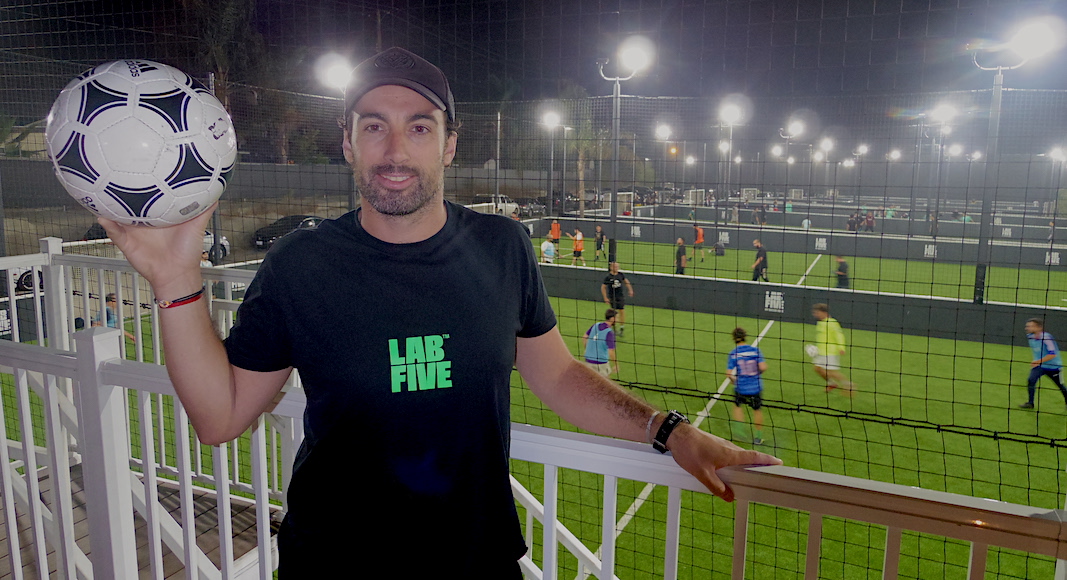 Open everyday from 9:30 am to midnight

The power of a countertop discussion should never be underestimated. It can take you far. In any case, she made Sebastien Abonnel, originally from Aix-en-Provence, cross the Atlantic.

The Frenchman officially opened Lab Five in mid-September, a set of outdoor 5-a-side football pitches in Pacoima, north of Los Angeles. “A center where you feel at home, with a family atmosphere”, he promises, passing in front of a field full of children and where a Mexican melody resounds.

He never imagined what would happen to him almost 10 years ago. While still a sports management student and intern at Nike in Paris, this former professional footballer discovered indoor football during a match between colleagues. A concept that appeals to him. He then decided to reject Nike’s job offer, and to use the family industrial warehouse in Aix-en-Provence to open the doors of Soccer Center in 2011.

The case is going well. But Sebastien Abonnel keeps in mind his American dream shaped by television series and great athletes like Michael Jordan. “I wanted to try something”, he admits. The adventure will then begin in its center in the south of France. On Sundays, he welcomes expatriate families (an international high school is nearby) and sympathizes with a father from San Francisco. Sunday morning coffees and discussions became a habit in 2014. The father – who is none other than Gilles Mischler, one of Facebook’s first employees – is seduced by his concept and his state of mind. “He told me that in the United States, there were only multi-sports fields with rounded angles, no French football pitch. He offered to help me develop Urban soccer centers on the American West Coast by investing, but I didn’t take him seriously ”, says the southerner, who has multiplied the conversations on the subject.

He then decides to go to California in 2016, on the pretext of a trip with his wife, and sees Gilles Mischler, returned to San Francisco after his French parenthesis. “We created the online box around a beer”, fun to say the 35-year-old Frenchman: “Gilles had the budget, I had the know-how”. The hardest part was yet to come.

Ready to take the plunge, starting in 2017, he multiplied his trips back and forth between Aix en Provence and California, in search of land to rent. And the disillusions begin with the visit of vacant lots at $ 150,000 per month in San Francisco, or even the hidden faults of a land dug up in San Diego … The disappointments are numerous, their file not reassuring the cautious owners, nor the authorities local: “It’s not the number 1 sport in the US, although soccer is growing among children and the Latino community.” But not enough to demoralize the one who defines himself as a “bulldozer”. After a hundred visits, he finally found his happiness: a plot of 12,000 m2 formerly dedicated to car auctions. “We convinced the owner with our long-term project.”

So begin the earthworks, the creation of grounds covered with synthetic grass, the lighting. Then, it is the turn of the Covid-19 to abuse its project. “We were supposed to open in early March, but it rained for two weeks. Then the pandemic forced us to close our doors. ”

A health crisis which strengthens them today. “The town hall allowed us to reopen for training”, explains the Frenchman. As stadiums and parks are closed, many kids’ clubs need places where they can express themselves. And Lab Five seems to have convinced them. Welcoming many families and groups of friends, Sebastien Abonnel keeps in mind the ambition of the beginnings, a diversified activity: hosting birthdays, academies (Juventus de Turin has already signed), corporate events, parties for the local community or even organize football leagues for fans of competition – in great demand on American soil – once the sanitary measures are lifted.

Already, after three weeks of activity, he is delighted to see the eight courts (29 by 16 meters) filled to 65% between 5 and 9 pm and to have been able to hire 4 people. But he does not intend to be satisfied with it. To improve the experience, Sébastien Abonnel will install a giant screen where the matches will be broadcast, as well as a terrace and a catering service. “We want customers to feel at home, to stay forever”, assures the one who also plans to set up a shop.

But the biggest innovation will be on the ground: “They will be equipped with cameras for a 2.0 match.” Trackers (installed on the ankles and the connected ball) will analyze the game, whether it is ball possession, precision, the number of assists … “It will give the possibility of orienting the game on performance.”

Despite the difficulties, Sebastien Abonnel emerges more strengthened than ever from this entrepreneurial experience. “The world of soccer is small, opportunities as an investor and operator are coming to me today. There is something bigger to do. “ With his partner, they are currently focusing on the Californian development of Lab Five. For that, they benefit from an envelope of 6 million dollars.

Four centers are already in the starting blocks. The one planned in San José is “in the design phase”, and two in Los Angeles (East and South Bay) are about to be signed. A second fundraising of 3 million dollars with a French industrialist is planned for the end of the year. “The goal will be to colonize the United States”, quips Sébastien Abonnel. The competition does not scare him: there are too few centers compared to the population density.

He hopes that soccer will emerge stronger. “There are efforts to be made on the part of cities and public authorities. We want to integrate this discipline into the local ecosystem, and in particular in after-schools ”, he pleads, praising the values ​​of teamwork, discipline and the socialization of football.

Open everyday from 9:30 am to midnight

They fear Trump will suspend the Trusted Traveler program in California

From a local swap meet to the bench

California housing crisis: although around 151,000 people live on the street,...

The guitar of Stephane Wrembel draws "Django the impressionist"