Home Latest News They mount art exhibition in honor of the Virgin of Guadalupe and... 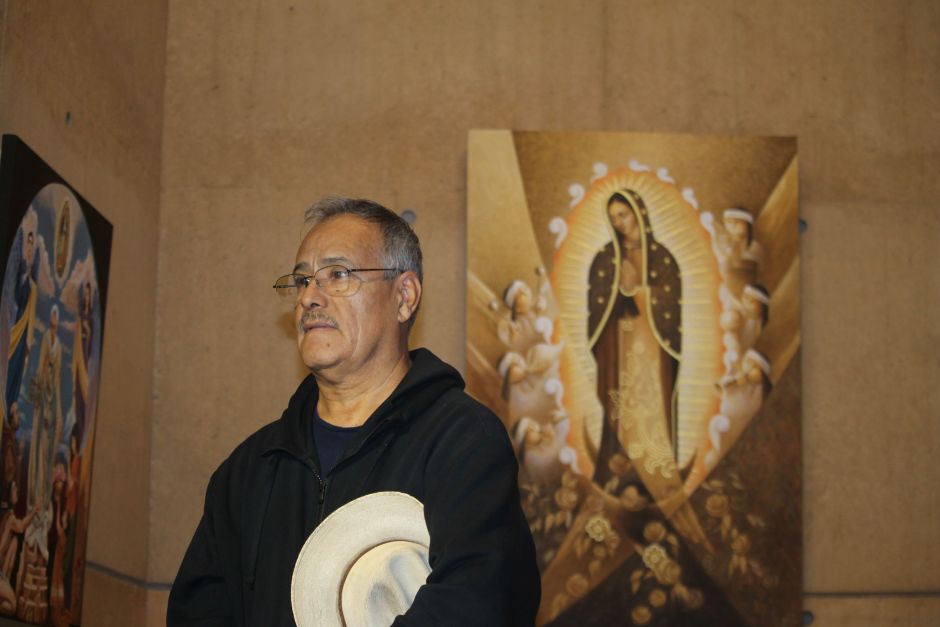 The famous Mexican writer and Nobel Prize for literature in 1990, Octavio Paz, once said that he did not know if all his countrymen were Catholics, but what he was sure was that, whether they were Catholic or not, they all declared themselves Guadalupans.

The Virgin of Guadalupe and San Juan Diego, symbols of identity and unity for Mexicans – and thousands of Latin Americans and other people – who reside in California can admire until December 16 an art exhibition that honors the “Morenita del Tepeyac ”and the Indian who appeared three times in December 1531.

Ten pieces of sacred art by maestro Lalo García and artists Laura Vásquez Rodríguez, Rosa María Álvarez and Rick Ortega were installed next to the chapel dedicated to Our Lady of Guadalupe, in the Cathedral Our Lady of Los Angeles.

“As a dancer, artist, Catholic, Mexican, angel and immigrant, I have a very special relationship with the Virgin of Guadalupe, thanks to the gift of painting that God gave me,” said teacher Lalo García to La Opinion. “In my office, God has allowed me to reflect my religious experiences through something visual; some artists have done it with music and I owned it, but mine is a unique way where I can visually share my experiences with our virgin brunette. ”

Precisely, in a work achieved with a pen and ink on a board entitled "Prayer of a Dancer", Garcia reflects himself as the Indian Juan Diego with the message: "Guadalupe Tonantzin. Tú that you understand us and fill us with love. We come all your children to ask for a sale. Just as some pray or offer it to you, your song receives our dance as a deep prayer ”.

The spelling mistakes in the message were written with premeditation because the work is very personal for the artist. Try to give intonation to the words as if they were spoken by a Nahuatl indigenous, which was the language of San Juan Diego.

“I worked on this work 15 minutes before my dance practices; while others warmed I drew the image, ”he said. “For us, the pre-Hispanic dance of the Aztec concheros or dancers has nothing to do with the show. For those who perform the dance is the purest way to pray to the Virgin of Guadalupe. ”

The canvas work “El Mensajero” by the artist Laura Vázquez Rodríguez, shows Juan Diego as the messenger who heard the voice of heaven from the mother of God, the Virgin of Guadalupe, which communicates in the native language of the indigenous .

In the work, the virgin is captured in the sky and her image is stamped on Juan Diego's yacht. Angels are also appreciated in the painting and they are the faces of the artist's own children, Yesenia and Lorenzo, in addition to their nieces Bianca and Sofia.

"The red roses in the painting represent the blood of Christ and the water symbolizes the baptism we receive, in addition to the protection of the Virgin," the artist described.

The teacher Lalo García added that with the presentation of the works, the Virgin of Guadalupe is honored as “the patroness of the arts”, at the same time that all the believing people are invited to, through the testimony of the artists know that “we have a protector, a unique virgin in the world and in Marian art that evangelized an entire continent, and under her protection we must reflect the blessings we receive each day, and at the same time, enjoy the beauty of each one of the pieces ”.

The piece called "The Journey of the Migrant" -which will be a mural to be installed in a parish "is a contemporary theme that afflicts migrants in the United States, and, on a journey through the images, people included in the Acrylic painting on canvas are those who make the journey from their home countries to seek stability in this nation and provide a better life for those who left behind.

“All the immigrants arrived here, but we also achieved it with the blessing of her that was already waiting for us,” said maestro García, a native of Coeneo, Michoacán. “The painting also shows the last trip that all migrants in the world will make; it is that journey from which he does not return, the journey of death ”.

The exhibition marks the beginning of the celebrations in honor of the Virgin of Guadalupe and San Juan Diego throughout the Archdiocese and in the Cathedral. A one-month pilgrimage with an image of the Virgin will culminate in the 88th annual procession and mass in honor of the "Morenita del Tepeyac", on December 1 in East Los Angeles.

A storm will bring rain and snow to the mountains of...

Together We Art artists raise funds for troubled youth

Sell ​​and buy in the United States: how to choose your...