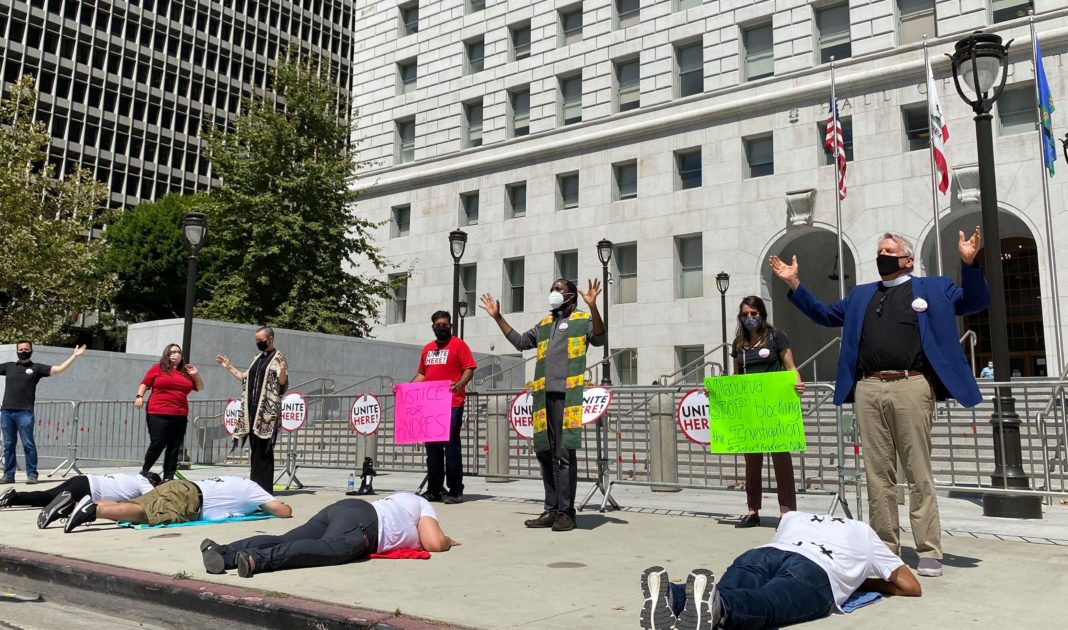 Dozens of workers affiliated with the UNITE Here Local 11 Union and community members carried out a protest action through a caravan of cars to demand that Los Angeles Sheriff Alex Villanueva stop opposing aAn independent investigation into the murder of Andrés Guardado.

The 18-year-old Salvadoran-American boy was killed on June 18 at about 6:00 p.m. by a Los Angeles sheriff’s agent in the city of Gardena in Los Angeles County.

An independent autopsy by his family last week confirmed that Los Angeles sheriff’s officers shot him five times in the back. The Los Angeles County coroner confirmed the same results on Friday, July 10.

“We are raising our voices to demand that Sheriff Villanueva make an independent investigation, and that they are not responsible. Five shots were fired at Andrés when he was already on the floor”Said Ada Briceño, co-president of local 11 of the UNITE-Here union.

With the automobile demonstration they wanted to make it clear that they are going to continue fighting for the law to be applied. “We cannot allow Latino and African American people to continue dying at the hands of the police“

The protest caravan is for Andrés Guardado, his children and his parents, he said. And he emphasized that the police must be there to give security to the community, not to kill. “It is incredible what we are experiencing.”

Protesters left number 464 south of Lucas Street in Los Angeles bound for the Palace of Justice in downtown Los Angeles. They carried signs taped to the windows of their vehicles, demanding justice.

Andrés is the son of Cristóbal Guardado, a cook, a member of UNITE HERE Union Local 11 for 14 years.

Both Cristóbal and Sandra, Andrés’s mother are immigrants from El Salvador. The boy was the youngest of three brothers.

He was born in Los Angeles and grew up in the Koreatown neighborhood. He worked full time as a security officer, but in his spare time he had a second job at the garage where he was killed. He studied mechanics at Los Angeles Trade Technical College.

The incident where he lost his life occurred in the 400 block of Redondo Beach Boulevard in the city of Gardena in southern Los Angeles County.

According to the Sheriff’s version, Compton station agents observed Andrés at the scene, and when the boy turned to look at them, he grabbed a gun and started to run. The bailiffs went after him in a short chase.

According to the sheriff, there were several shots fired at Andrés, who was pronounced dead at the scene. The autopsy revealed that there were five shots.

When one of his agents becomes involved in a shooting, and someone dies from the bullets of the agents, a series of investigations are initiated by the same Sheriff’s Department.

But it is the Los Angeles County District Attorney’s office that after analysis determines whether there are criminal charges, and whether the shooting was justified.

Sheriff Alex Villanueva did not like that forensic doctor Jonathan Lucas had made Andrés’s autopsy public, since he said that it puts the investigation, the prosecution of the case and any administrative or criminal process at risk.

“This will compel the Sheriff’s Department to use court orders to prevent witness testimonies from being tainted before interviews.”

He noted that Dr. Lucas acknowledged that he succumbed to pressure from the Board of Supervisors and the Office of the Inspector General, and surprisingly admitted that he sacrificed the integrity of the investigation in a bid to satisfy public curiosity.

He added that the Sheriff’s Department will not comment on the Andrés Guardado case until the investigation ends. “Doing so would set a poor precedent that may threaten the integrity of future criminal investigations including officer shootings.“

Lucas, the forensic doctor, said in a statement that after thinking it through, he revealed the autopsy report of Andrés Guardado Pineda. In doing so, I have given careful consideration to the major variables in this case, supporting the administration of justice as well as the public right to know. I don’t think these are mutually exclusive. ”

Burcher who is also one of the closest advisers to Villanueva, andwrote about a news report about the murdered boy, “why so much coverage on Guardado. How about Isabella Cortes and Patricia Alatorre. Why does this man who chose his fate have so much coverage from you, but two murdered 13-year-old women, one of them raped, get nothing ”.

On July 15, it emerged that Captain Burcher was no longer the head of Villanueva’s office and was resigned to the Sheriff’s East Patrol Division. At the same time, an administrative investigation into the comment was launched on the networks.

“It is really problematic that the same day that Sheriff Villanueva declared that he would not comment on the Andrés Guardado case, his team leader went to social media to do exactly that.Said Nicholas Yoka, an attorney for Andrés’ family.

“Capital Burcher not only denigrated a young man who was shot and killed by one of his own agents, but he did so in a public forum, and in the midst of an investigation into a homicide conducted by his own department.”

He added that all of this makes it clear that the sheriff is unable to conduct an independent investigation into the shooting.

“Captain Burcher’s statements demonstrate that the results of the investigation are predetermined and that the department has no interest in finding out the truth. ”.

Farmworkers: between fear and need

Hayes-Bautista: attacks on the Latino community are cyclical