Home Latest News The celebration of the Day of the Indigenous Peoples arrives to replace... 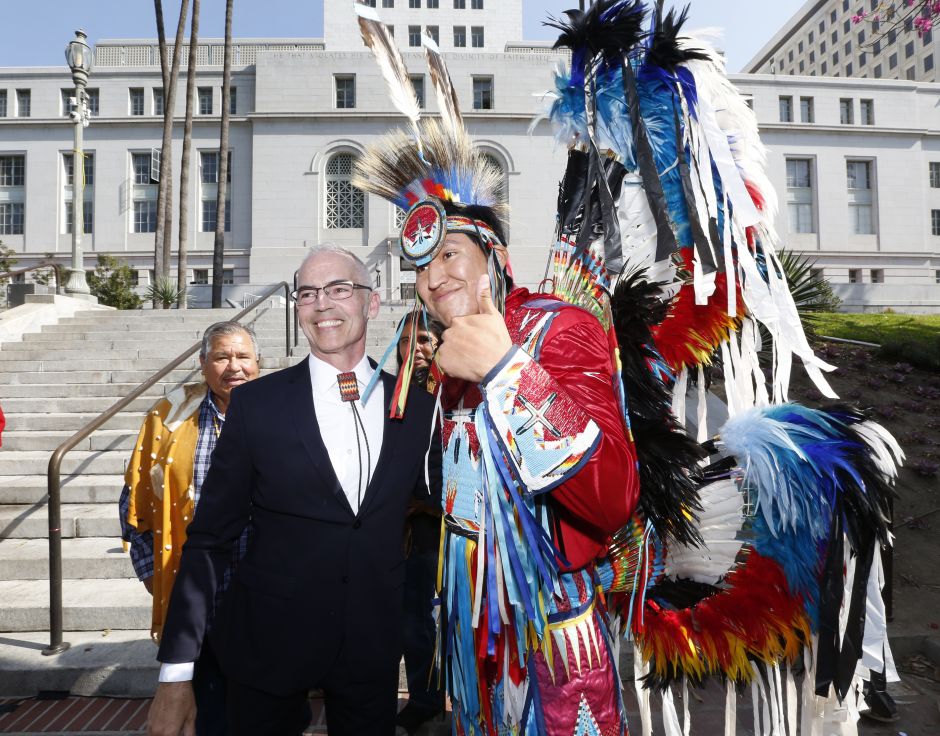 With a prayer and a blessing from the earth marking the four cardinal points local tribal leaders began a ceremony this week to announce the celebration of Indigenous Peoples Day this October 13 in Grand Park in downtown Los Angeles.

The ceremony was led by the Chief of the Tongva tribe, Anthony Morales. Los Angeles is located on Tongva land.

The Indigenous Peoples Day event to be held for the second consecutive year is being organized by Councilor Mitch O'Farrell's office and the Native American Commission of the City and County of Los Angeles.

As a member of the Native American tribe Wyandotte Nation O'Farrell led an initiative to replace Christopher Columbus Day with Indigenous Peoples Day during his first term. In 2017, the city council voted to establish the Day of Indigenous Peoples as the second Monday in October, thus replacing the day of the Discovery of America.

Although history has identified the Italian admiral and cartographer Cristóbal Colón as the navigator who discovered America, he was also personally responsible for inaugurating the greatest genocide known in mankind, said O'Farrell.

"That is why it is very important for Native Americans and Native Americans that we simply eliminate that day and replace it as the celebration of native Indians," O'Farrell said at the press conference following the ceremony of the Native American tribes. "We have dedicated ourselves to marking the day of remembering our ancestors while denying the myth that Columbus discovered America or any other place."

The councilor stressed that since 1970 several Native American groups have celebrated Native Indigenous Day the same day as the celebration of Christopher Columbus.

"We have made history because we remain the largest population of any city to make the change and now other cities have made the change," said Councilor O'Farrell.

"Our community has struggled a lot for this annual celebration, and for this platform to raise the problems, talent and contributions of Native Americans in Los Angeles," said Chrissie Castro, president of the Native American Indigenous Commission of the city of Los Angeles in a statement.

"Through this event, we pay tribute to the first towns of the city and the nation, the Tongva, and reject the violent and genocidal man who is Columbus."

This year's event bears the theme "Past, Present and Future" to continue advocating with state and federal legislators to replace Christopher Columbus Day with the Day of Indigenous Peoples.

Nationally, there has been a movement to replace Columbus Day with the Day of Indigenous Peoples. The long list of cities that have adopted resolutions to declare the second Monday of October as Indigenous Peoples Day includes Berkeley, San Francisco, Denver, Seattle, Anchorage, Portland, Albuquerque, Minneapolis and Santa Cruz.

Through this recognition the importance of honoring the contributions and sacrifices made by the indigenous ancestors is raised and the narrative of Christopher Columbus is denied.

O'Farrell said that although Indigenous Peoples Day is a time to celebrate all native cultures, all people of all nationalities are invited. It will be a Pow Wow dedicated to diversity.

This year the celebration will be attended by the semifinalist of "The Voice" Brooke Simpson, who is a member of the Haliwa-Saponi tribe and rapper, singer, songwriter and activist Taboo, which belongs to the Shoshone tribe. Also the winner of the MTV Video Music Award PJ Vegas and the acclaimed Native American rock group REDBONE among others.

They offer puppies for sale, and they scam people who want...

Puma attacks a raccoon in a house in southern California

A new minimum wage went into effect in Los Angeles and...