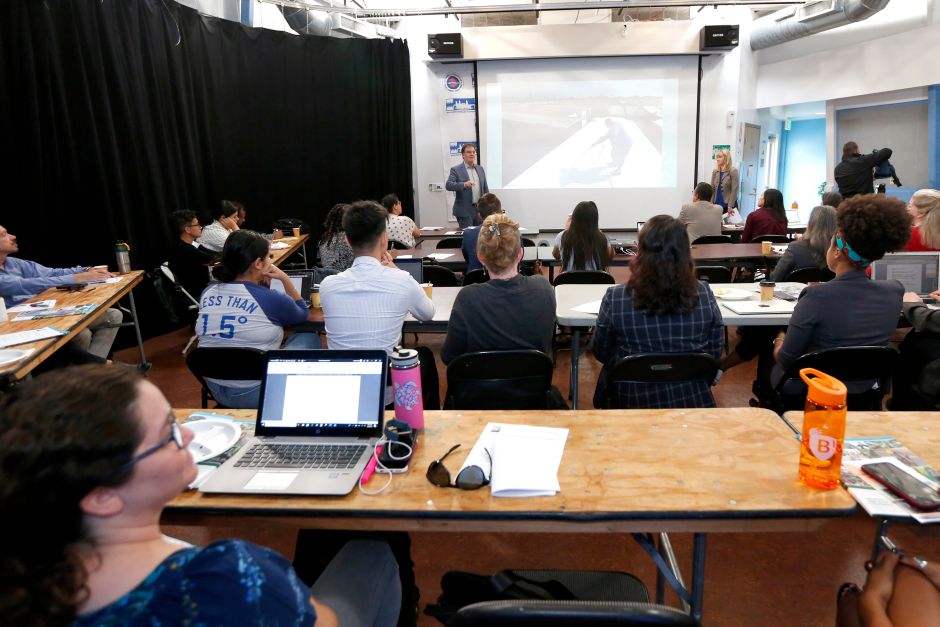 It is increasingly common to hear about climate change, but really, how much do low-income communities understand about this issue? How can you help from home?

They may not be informed that an efficient appliance could save up to five times the electricity of an old one. They may ignore that renewable energy can help reduce the cost of the bill or that changing the lawn for sun-resistant plants can save water bills.

CCEDA is comprised of organizations that are actively involved in the revitalization of California neighborhoods, including community development corporations promoted by residents, local governments, community action agencies and religious institutions.

A group of representatives of regional organizations and climate change leaders met on Tuesday to hear the options that their communities may have to face climate change.

Roberto Barragán, interim executive director of CCEDA, said that the most important thing is to have a conversation at the community level so that people understand how they are being affected.

"As organizations, activists and people who are involved in improving our communities, we can develop strategies on how to be more resistant to climate and how our residents can respond to climate change," said Barragán.

The director said that it is necessary for people to understand the reality we are facing, for example, in terms of temperatures.

“How much are electricity bills increasing? How important can it be to switch to solar energy? How important is it to talk about options for shelters for heat as centers for cooling? ”Barragán questioned.

Other methods to help and benefit more directly can be simply by changing old appliances to newer models that can spend up to five times less on the electricity bill, said Jonathan Parfrey, executive director of the Climate Resolve organization and founder of the popular CicLAvia event.

Parfrey said public transport should also be advocated, alleys where more water can be captured, homes with sun-resistant plants, water sources for children in public locations, among others.

“In a 100-year follow-up in Los Angeles we see that before there were 5 very hot days in the year. There are currently 25, ”said Bryn Lindblad, deputy director of Climate Resolve. "We see that hotter days equate to poor air quality and that is why we see more people, for example, suffering from asthma and respiratory problems."

Participants learned strategies to develop agendas that adapt to climate change, as well as resources and financial tools available to implement what they learned in their neighborhood.

Parfrey stressed that it is important to bring these financial resources to low-income neighborhoods because they are otherwise out of play. He set an example when electric vehicles began to become popular and companies gave incentives to those who obtained one.

“But where was this happening? In Beverly Hills, on the west side. In the most affluent neighborhoods, ”Parfrey said, ensuring that it is time to bring the necessary incentives and structure to low to medium income communities.

Investments of Weather Of California

During the briefing, the importance of California climate investments was also discussed. This is a state initiative that puts millions of dollars in “Cap and Trade” to reduce greenhouse gas emissions; In addition to strengthening the economy and improving public health, as well as the environment.

The initiative focuses on low-income populations that are affected by multiple sources of pollution in the state, especially those that are vulnerable to climate change.

The projects supported by this initiative include those that advocate zero-emission transport, affordable housing, renewable energy, household energy efficiency, water savings, sustainable agriculture, pedestrian and bicycle paths, among others.

To find out if your organization qualifies for any of these projects visit caclimateinvestments. Ca.gov

Real estate: invest in France rather than in the United States

Social distancing would be helping to flatten the curve of contagion...

Afrolatina who was undocumented seeks to be a Los Angeles councilor