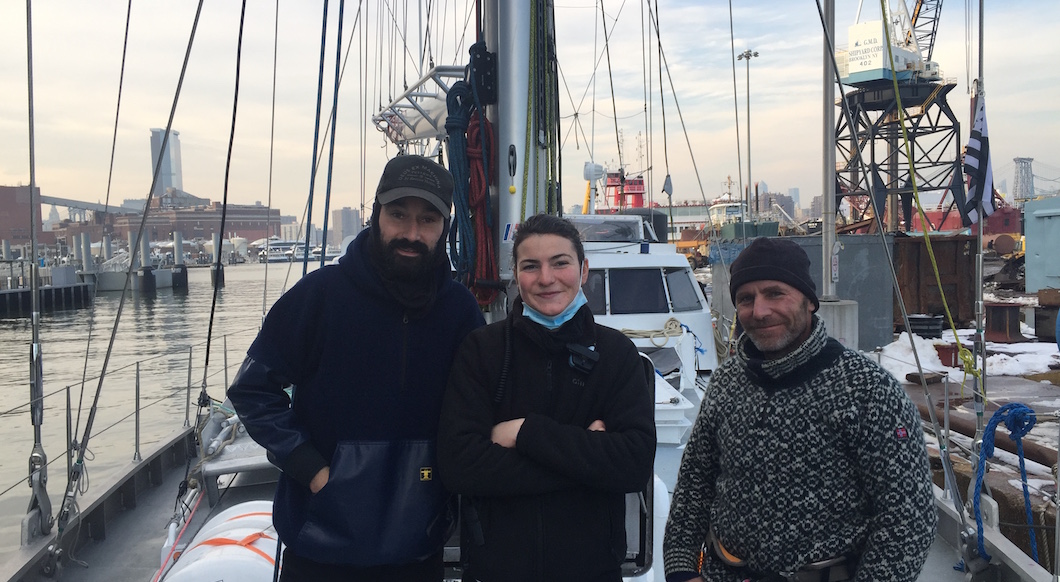 Near the New York ferries moored at the Brooklyn Navy Yard, two masts stand proudly facing the Manhattan skyscraper, amid cranes and port equipment. They belong to the Grain de Sail, the sailboat of the Breton company of the same name which wants to develop the transport of goods by sail between the two shores of the Atlantic. The sailboat arrived from Brittany on the night of Tuesday, December 15 with nearly 15,000 bottles of organic French wines intended for sale in New York.

Disembarking in a city stared at by the Covid-19? “It does not matter. We are here to work, not to sightsee“, Says the captain, Loīc Briand.

It’s not every day that New York sees such a cargo ship arrive. Far from the container ships to which the authorities are accustomed, the Grain de Sail measures twenty-four small meters and uses velic propulsion (sails) as the main mode of movement. It does have an engine, but this is mainly used for maneuvers of arrivals and departures in ports and occasionally during the crossing to ensure that it works. According to Loīc Briand, only 60 liters of diesel were used for the entire journey (almost a month) between Brittany and New York. “I think the Americans think we are nuts. They wonder how we were able to cross the Atlantic on a small 24-meter boat. They are used to container ships that measure 300. For us sailors, that’s normal. We find it funny“.

In addition to Loïc Briand, originally from around Saint-Malo, the crew is made up of three members: Faustine Langevin, second, Goulwen Josse, lieutenant, and François Le Naourès, sailor. They cut their teeth in fishing, sailing passenger transport and the merchant navy.

The New York stopover is an important step in Grain de Sail’s ambitions. This is the first transatlantic crossing of the freighter-sailboat, built by the Morlaix SME to transport the coffee and cocoa from Latin America necessary to supply its chocolate-roasting factory. After New York, the boat will set sail for the Dominican Republic to fill up on cocoa before returning to Brittany. In the long term, Grain de Sail would like to build other, larger sailboats attached to production centers in France and the United States, and make regular transatlantic rotations.

Seduced by the social and environmental dimension of Grain de Sail, Loïc Briand is convinced that the transport of goods by sail has a bright future. “This week again, a container ship lost 200 containers. At some point, you may have to ask yourself questions. A crew of 18 can’t do anything against 200 containers coming loose. We are on a human scale. Could we transport Chinese boxer shorts between Asia and Europe by sail? It would not be profitable. Can we transport value-added products at a limited additional cost? It’s possible“.

In addition to chocolate and coffee, Grain de Sail aims to conquer other markets, such as spices, whiskey and rum.

While waiting for the departure of the boat after Christmas, weather permitting, the curious can visit the Grain de Sail by appointment and taste the wines transported in its refrigerated hold. They come from seven French winegrowers. To avoid unpleasant surprises, the impact of long journeys on the taste of the wines has been assessed by Grain de Sail using fishing boats in France. “The selected winegrowers have never exported their wines“, Specifies Matthieu Riou, US wine and spirits director at Grain de Sail. He came to New York to promote it to New York restaurateurs and wine merchants. “It’s not the best time for sure, but there is real interest in the project from the start. The public is interested in initiatives that bring hope. It can work in our favor, he says. There are a lot of projects in Brittany around sailing transport. This can compete with the classic freighter. We may make the trip in a little longer. Nature works that way, but that’s okay. We know when the boat leaves but not when it arrives“.

Why do people move away from Minnesota?

Is University of Michigan safe?

What is the best town to live in upstate New York?

Is there a way to map out multiple locations?