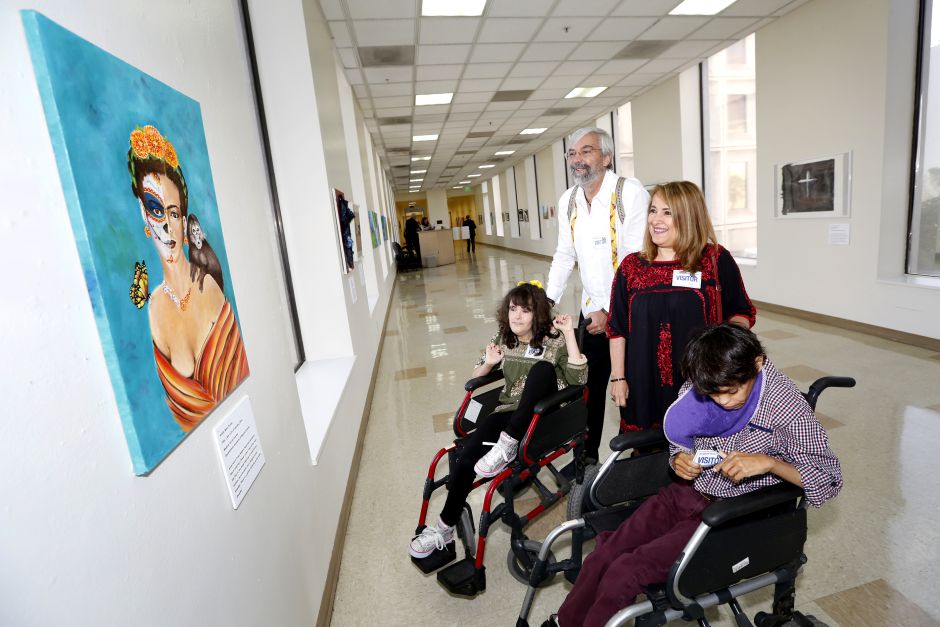 The exhibition, which offers free admission to the public, seeks that everyone has a space to express their talent

The artist Maru Pombo with her husband and two children with disabilities. / photo: photo: Aurelia Ventura.

In front of an enthusiastic group of people with disabilities, the Academy of Special Dreams Foundation granted a few days ago a special recognition to the Oaxacan artist María Elena "Maru" Pombo at the City Hall of Los Angeles.

Maru Pombo, as she is artistically known, is the director of the SONRYEE Foundation and was named a leading community ambassador for the Academy of Special Dreams of Oaxaca, Mexico.

With its foundation, the Mexican artist focuses on raising awareness in the community about people with disabilities. This topic is very personal for her because she has two children with mental and physical disabilities.

He said he initially had difficulty dealing with the situation of his children – who are now 36 and 32 years old – but he added that over time he appreciated life at his side.

“They have made me see the moon, the trees, the nature,” said Pombo who is inspired day by day to create his art. "Physically it can be difficult but you adapt"

Art in the Town Hall

During the event, the annual exhibition of Disability art 2019 in its 12th edition was also started where dozens of artists with different disabilities are presenting their works of art at the Los Angeles city hall.

"This is considered a testament to the creativity of people with special needs," said Michael Dergar, president and executive director of the Academy of the Special Dreams Foundation based in Pasadena.

"We believe that all people, regardless of their disabilities, should have the same opportunities to express their talents and succeed in the arts," said Dergar.

"This art exhibition is another opportunity to encourage, promote and exhibit the artistic expressions of these incredible artists from all over the country."

The Department of Disability and the City of Los Angeles was part of the association so that for the tenth consecutive year the exhibition will be held, which this year is in the Lobby of the City Hall of Los Angeles.

Stephen David Simon, executive director of the Los Angeles Department of Disability said they are very pleased to be able to exhibit the artists' work.

"The general public should know that these are real artists doing extraordinary work," said Simon. "They could have a full-time job just need the help they need."

The work of art entitled "Free at the End" is an oil on canvas depicting the life of artist Frida Kahlo, said artist Maru Pombo.

“It's the before and after. On one side she is with her pet and the cempaxúchitl flowers that are very popular now in November and the other part is when she is no longer in this world but she has a butterfly that represents freedom after a very difficult life of suffering ”, explained.

She said she was very grateful to be able to collaborate with the Academy of Special Dreams to be able to provide more support and resources to people with disabilities.

“I think the universe brings together the right people at the right time. [Dergar and I] have organizations that support people with disabilities, ”said Pombo.

Artists from the city and county of Los Angeles also attended the reception. Teacher Kathleen Victory arrived with 11 students from Alhambra where one is an artist presenting her work; The others were in support.

"It's very exciting to be here and see the progress of inclusion but we need to do more," said Victory who has participated in the event for eight years. "They all have some kind of limitation but one learns more from them than they do from day to day."

Dergar said the exhibition will be performing for a month and is free to the public. They must only register when entering the town hall.

He also invited those artists with disabilities interested in presenting their works of art visiting the organization www.specialacademy.org

They extradite from Mexico a fugitive who was fleeing justice in...

Children, children of immigrants, honor the Virgin of Guadalupe

In Nevada, the revival of the economy at the heart of...

Pharmacy cashier: "We are at high risk of getting the coronavirus"