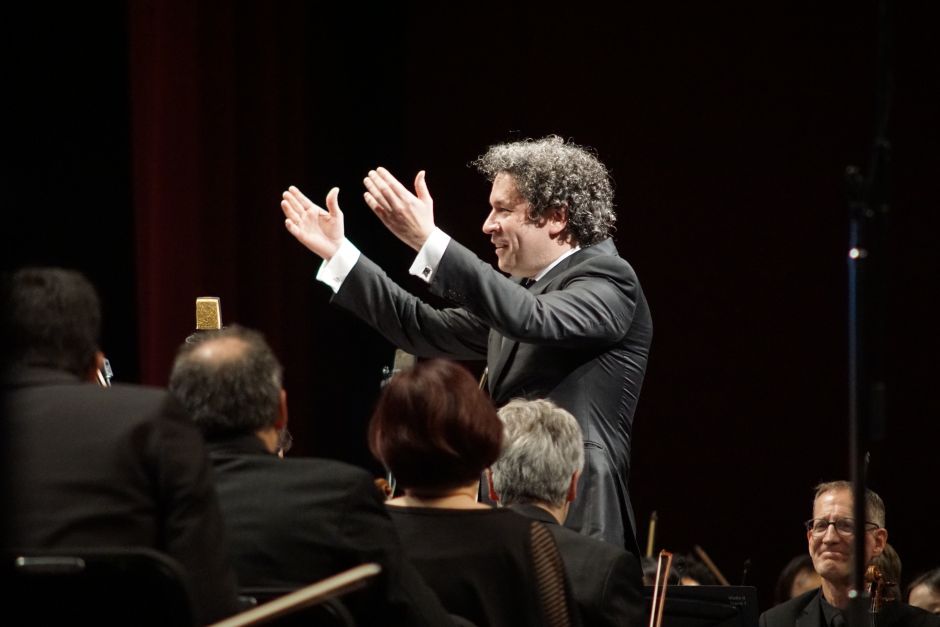 There at the National Auditorium of Mexico, next to Gustavo Dudamel, Sergio Páez played his violin in front of almost 10,000 people, being elected as one of the representatives of the Los Angeles Youth Orchestra (YOLA) that would participate in the important concert.

The 16-year-old, from Mexican grandparents and who for the first time stepped on the capital of that country, was very safe and took the eyes of many, despite all the musicians of the Los Angeles Philharmonic Orchestra (LA Phil) They met him on stage.

“I never thought I could play in such iconic places as the National Auditorium. For me it is crazy, and I feel a mixture of fear, pride and happiness, ”he said hours before taking the stage.

Páez was one of 96 YOLA musicians who joined Dudamel and the Los Angeles Philharmonic on a tour of Mexico City as part of a cultural exchange with Mexican music students, titled "Encuentros".

Intensive music and leadership workshops, rehearsals and master classes by Paolo Bortolameolli, Associate Conductor of the Philharmonic, and musicians of LA Phil, as well as a free rehearsal / concert at the Palace of Fine Arts and a presentation at the Teatro Julio Castillo, were part of the busy schedule that served to celebrate 50 years of brotherhood between Los Angeles and Mexico City.

“It's something very big for me. I never imagined that I would come here to play, all these wonderful places, ”said excitedly Rebeca Márquez, 14, who has played the trombone for five years. “It is an opportunity that has opened my eyes. I never thought to go that far. ”

“Encuentros” was a collaboration between YOLA, the National Music Development System in Mexico, the Music Schools of the National Institute of Fine Arts and Literature (INBAL) and the Gustavo Dudamel Foundation.

The participation of YOLA musicians with LA Phil in the National Auditorium took place in the last concert of the three that Gustavo Dudamel conducted last week in Mexico City, as part of the 100 years of the Philharmonic celebration tour and the return of the orchestra to the capital of Mexico for the first time in 20 years.

A full house, the Palace of Fine Arts received the angel orchestra on November 12 and 13, where the renowned Venezuelan conductor offered a special program with the works Sustain, by the American Andrew Norman, and the Romantic Symphony, by Anton Bruckner. For the second night, the musicians performed three different pieces, The Consecration of Spring, by the Russian Igor Stravinski; Téenek – Inventions of territory, by Mexican Gabriela Ortiz, and Must the Devil Have All the Good Tunes ?, and both times the audience cheered the musicians on their feet.

At the end of the tour, the National Auditorium dressed up on November 14 to witness the talent of Dudamel and his musicians, the young people of the YOLA and the experienced members of LA Phil, who this time played more modern and cheerful pieces, like the Mexican Guasamacabra, by Paul Deanna, and Huapango, by José Pablo Moncayo; and the Venezuelan song Fuga con Pajarillo, by Aldemaro Romero, for which the director was accompanied by four musicians from his country, who for half an hour displayed their talents with the harp, the four, the bass and the maracas.

To close, Dudamel chose seven songs by John Williams, known for being part of the soundtrack of famous Hollywood movies, such as Star Wars, Jurassic Park and Harry Potter, which were widely celebrated by the large audience that once again foot, applauded the work of the angel orchestra.

"With art, walls collapse and bridges are built," Dudamel said in front of thousands of Mexicans

Summer job: how to find a job in a national park?

what we can and cannot do –

It's time to invest in Florida real estate

XL Airways, it's over