Home Latest News Mayor of LA declares fiscal emergency due to fall in income due... 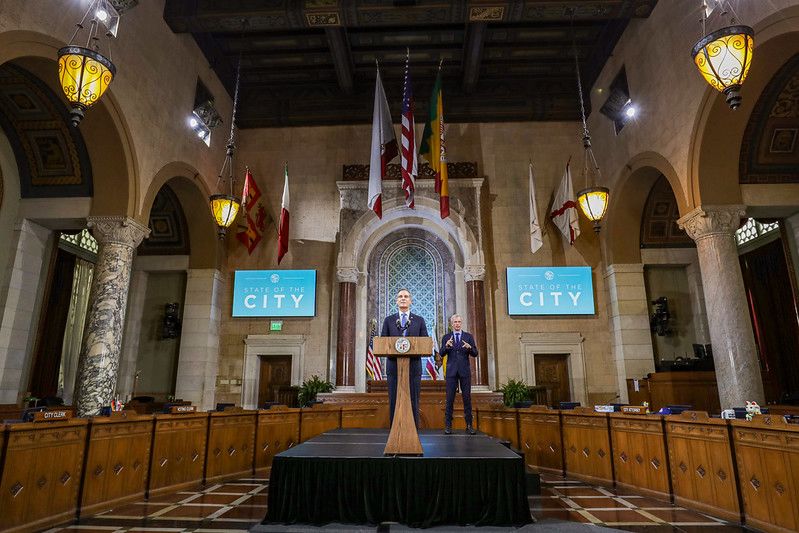 After 46 days of the coronavirus pandemic breaking into the lives of Angelenos, Los Angeles Mayor Eric Garcetti announced that the city's revenue has fallen, so staff hires are frozen, and workers' wages will be cut by 10% from July, when fiscal year 2020-21 begins.

The only ones who won't see his reduced salary are firefighters and police, he said in filing the annual state report kept by the City of Los Angeles.

At the same time, he declared the fiscal emergency as part of your budget plan for the 2020-21 fiscal cycle which starts in July.

“The way back to where we were will be long and difficult. We need to adjust spending today to prevent further drastic measures, "said the mayor in his budget message.

"As long as Angelenos remain safe at home, there will be long-term reductions in our income," he said.

The mayor has proposed cuts of 230 million dollars in the budgets of all the departments from July. For street services, the proposed reduction is 20%; infrastructure spending would be reduced by 10%; that of the Department of Cultural Affairs in 8.1% and even that of the zoo in 12%.

Regarding the cuts to workers' wages, the mayor said that next fiscal year, 26 days, almost a month, will be taken from their unpaid workday so as not to cut critical services and programs. This means that they will stop working one day, every two weeks during a fiscal year.

However, Garcetti warned that his priority will be to end the days without work and without pay for municipal employees, as soon as possible.

“I have asked the federal government to loosen restrictions on emergency funds that prevent us from using them to replace lost income; or that in the next relief package, cities are rescued as well as cities have been rescued, ”he said.

To respond to the coronavirus crisis, Garcetti revealed that they have borrowed $ 70 million from the City's reserve.

And not only have the city's revenue plummeted, hotel reservations have collapsed, and passenger traffic at the airport has dropped 95%, he said.

"From a fiscal perspective, this is the worst we have ever experienced"

As a consequence, many departments will have to operate at reduced strength, many programs will lose funding, and community and recreational services will see significant changes.

"We will have to spend less on the removal of the graphite, and on the care of our urban forests," said the mayor.

Andy Ortiz, a Hispanic who has spent 20 years working as a gardener for the City of Los Angeles, said he doesn't like or think it's fair that the mayor wants to cut their wages.

"I'm going to fight everything to avoid it. He must honor our contract as union workers. ”

Urged the mayor to "look for cuts other than our wages"

Andy recalled that already in the 2008 recession, they suffered cuts to their income. “This time, we don't want them anymore. We live daily, check after check. We barely get what we earn and they want to reduce our income. We disagre. No way!".

Coral Itzcalli, a spokesperson for the local 721 International Service Workers Union (SEIU), which represents a large number of City employees, said the cut in hours and wages is very worrying.

"These public workers are the ones who are in charge of basic and vital services such as public health, garbage collection, maintenance of parks, streets and highways," he said.

Many of the workers, he emphasized, work without the appropriate personal protective equipment, risking their lives as in the centers to test for the coronavirus; Others serve the homeless population on the streets of Los Angeles to prevent an outbreak of the pandemic.

"It is not fair that today they are called "heroes" for responding to this humanitarian crisis; and tomorrow they will be left without sustenance for their own homes ”.

He noted that the mayor and the Los Angeles Council must seek other alternatives to balance the city's budget. "Going behind the worker's pocket will result in more families without jobs and without resources to get ahead."

Los Angeles Council President Nury Martinez said they know the City is going to change forever on many levels, but wondered how it is going to make that change.

"It is my hope that the City Council and the Mayor make sure that we have a fairer city that puts families first, and respects the workers and diverse communities that are the soul of our city."

City Comptroller Ron Galperin estimated a drop in revenue of $ 231 million in the current budget; and for the next fiscal cycle, 598 million dollars.

What are the alternatives to traditional cinema in Los Angeles?